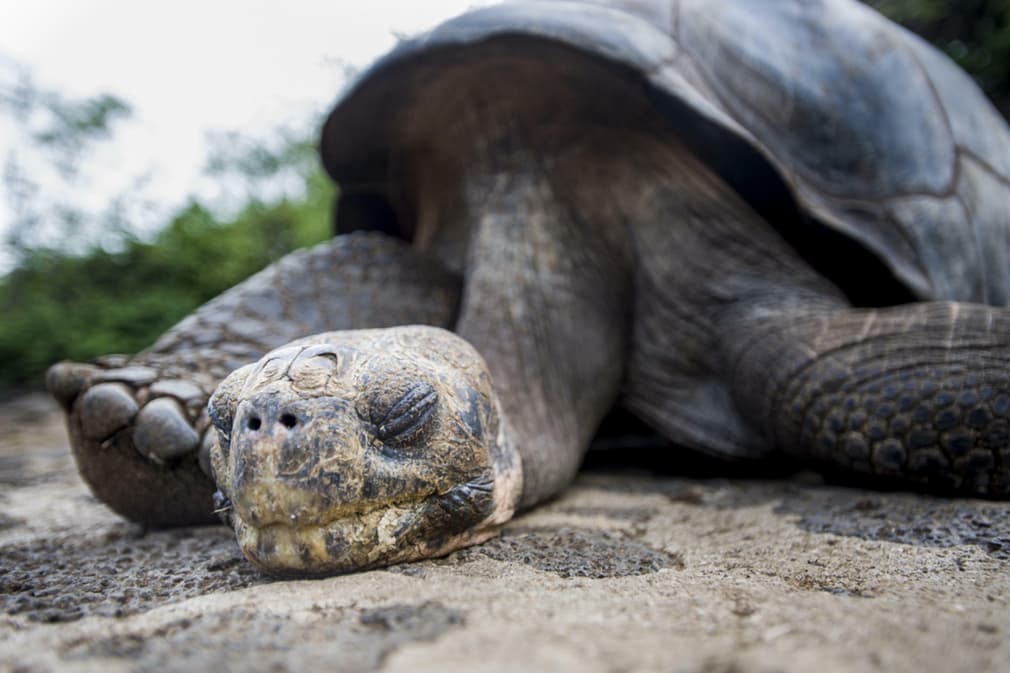 The world's most famous tortoise has died and with him a species is extinct. To commemorate George's long and lonesome life, here are ten things you might not know about the giant tortoises of the Galapagos Islands:

1) They live a long time, up to 300 years. At roughly 80 years old, George was therefore a mere teenager. This was one of the issues with finding George a mate - the uncertainty. It appeared that there were no other surviving Pinta Island tortoises however, it is theoretically quite possible that another one is out there somewhere and has been wandering around lost for a hundred years.

2) Darwin used tortoises as take away food for the journey home - 32 of them to be precise. All sailors did the same to be fair. That's why they were close to becoming extinct. As a foodstuff tortoises were fantastic for long sea journeys. Easy to catch, they could be stored upside down in the hold of the ship and survive for a very, very long time with the minimum of care. They could then be killed and eaten to provide that rarest of delicacies on the high seas - fresh meat.

3) Lonesome George wouldn't have felt lonely, don't worry. Giant tortoises apparently lack any social structure at all and live entirely solitary lives barring the occasional very clumsy, long-winded and loud mating session. So whilst this picture of George might make you think that his life was a bit dull, he was probably happy as a clam.

4) Tortoises got to the islands on their backs. This is somewhat conjecture but the best guess as to how the tortoises got to the islands in the first place is that they got washed down from Central America on their backs. There is evidence of populations of giant tortoises on the Central American isthmus, long since extinct. This would have been the closest mainland population of these animals so it's reasonable to assume that this was the source. What then happened is that different tortoises washed up onto different islands and gradually began to evolve into sub-species with subtle distinctions.

5) George was the last of the Pinta Island tortoises but there are another 10 sub-species alive. Originally there were 13 sub-species so three have now become extinct.

6) The Galapagos tortoise was said to be the inspiration for Steven Spielberg's E.T.7) Extinction is never good news but things could be far, far worse in the Galapagos Islands.Back in 1905 the California Academy of Sciences went to the Galapagos Islands to pull out a record of the full species diversity - 75,000 biological specimens were taken in total (including 260 giant tortoises). They did so because they fully expected the wildlife of the islands to be stripped in short order. In fact, 95% of the species which Darwin saw when he landed in 1835 are still there. As such, the Galapagos Islands stand as the best testament we have of conservation.

*8) Darwin had no idea that there were different species of Galapagos tortoises when he visited. *There's a romanticised image of Darwin landing on the different islands and declaring 'By Jove! These animals are all subtly different!' In fact it was only much, much later in his life when he had begun to conceive of the Theory of Evolution that he returned to his samples gathered from the Galapagos and identified the species variations from island to island. It wasn't the tortoises which he noticed first either - it was the finches with their different shaped beaks. The tortoises came later.

** 9) George had been trying his best to breed.  **George's home, the Charles Darwin Centre, is the largest of the Galapagos Giant Tortoise centres. It's open for visitors but its main task is to breed giant tortoises. George was the last surviving of the La Pinta island tortoises and as such has been a mainstay of the centre for many years as they have tried to track down species mates to try and continue the line. Recently they had found a couple of very close matches and in fact things got far enough along that eggs were laid. Sadly, they were not fertile and George remained lonesome.

** 10) Giant tortoise breeding centres are an exercise in patience. **They take so long to grow up that it's 30 years before the centres can release them into the wild. Only now are the first eggs being laid in the wild from tortoises reared at the Darwin Centre. Essentially, the programme is just completing its first cycle of rearing/re-introduction after 47 years.