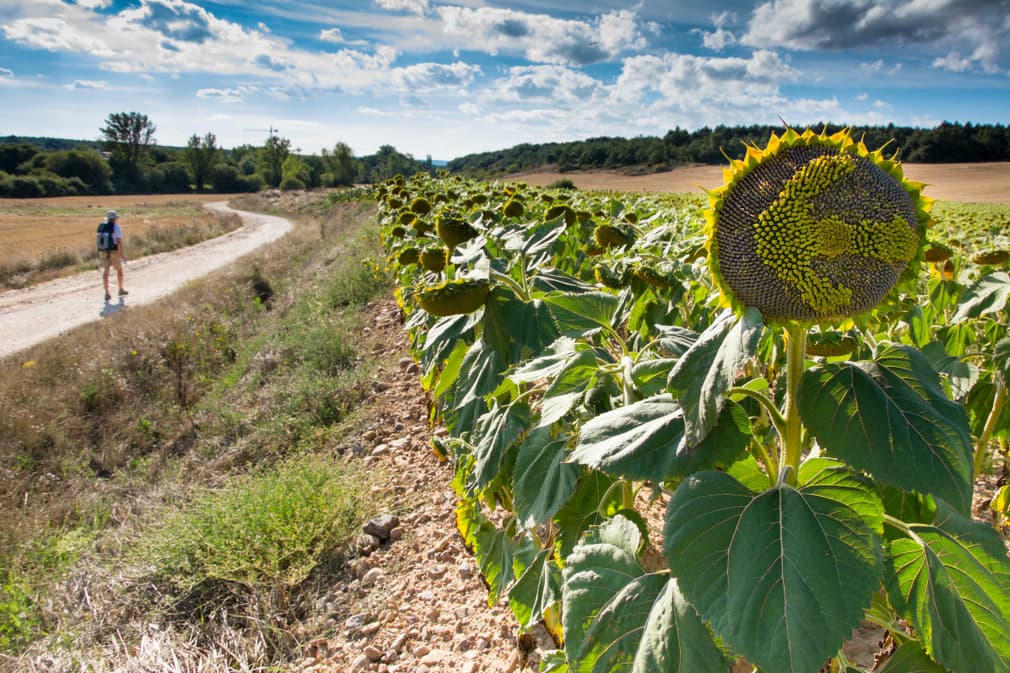 Each year, hikers from all around the world travel to Spain to walk the iconic Camino de Santiago. Dating back from the Middle Ages, this epic route is probably the most popular of the ancient pilgrimage routes. Here we share the best facts and anecdotes about the Camino.

1- The major routes today derive from the 12th century Codex Calixtinus (Book of Saint James), which included descriptions and itineraries to the cathedral of Santiago, from the main starting points.

2- Traditionally though, the Camino de Santiago begins wherever your doorstep happens to be.

3- The Camino Primitivo from Oviedo is the original pilgrim’s route to Compostela. It follows King of Asturias Alphonso II’s own path to Santiago as he helped the Catholic church determine the authenticity of the remains of St. James in Galicia back in the 9th century.

4- In 1993, UNESCO added the Way of Saint James on its list of worldwide heritage sites. The French Way was then chosen as the official route because of its popularity but also because it offered safety and availability of food supplies. In 2015, it also added the Routes of Northern Spain (Primitive, Coastal, Interior, and Liébana) to its list.

5- To get the Compostela certificate, you need to prove you have completed at least 100 kilometers of the route, either on foot or horseback, or 200 kilometers by bicycle.

6- Sarria (111kms away from Santiago) is therefore the most popular starting point for pilgrims walking the Camino.

7- Santiago de Compostela means ‘St James of the Field of Stars’. According the Christian tradition, the remains of the Apostle where discovered because there was a star on that field, illuminating its location.

8- Whenever St. James’ feast day (July 25th) falls on a Sunday, the Cathedral of Santiago declares a holy year. This last occurred in 2010 and is set to happen again in 2021.

9- Luis Vázquez de Parga is one of the three medieval experts who wrote The Pilgrimages to Santiago de Compostela, also known as the ‘pilgrim’s bible’. Funnily enough, Vázquez also happens to be the great uncle of Pura Aventura co-founder Diego Martín.

10- Besides the ancient Monastery of Irache in Ayegui, there is a fountain that dispenses wine to the pilgrims. The ‘Fuente de Irache’ marks a custom dating back to the Middle Ages when no pilgrim was refused a hunk of bread or a glass of wine.

12- The abbey of Cluny, in Paris was responsible for producing the richest and most abundant songbooks, which were key forms of communication and dissemination of culture at a time when there were no printing presses and most didn’t know to read.

13- These books were also the first travel guides and formed a beautiful way of preaching whilst providing useful information about the Camino at the same time. They where the best way to teach people: memorising information through chorus, rhymes, rhythm.

14- The scallop shell, commonly found on the shores in Galicia, has long been the symbol of the Camino de Santiago. The shell is frequently seen along the trail to help guide pilgrims.

15- The famous yellow arrows that also mark the Camino were put there during the 1980s by Elías Valiña, the priest of O Cebreira, and Andrés Muñoz, President of the Friends of the Camino de Navarra and who dedicated much of his life to improving and conserving the French Way.

16- Last year alone, over 300,000 followed in the footsteps of their medieval forebears along the ‘Way of St. James’.

17- The albergues (public hostels) can’t be booked beforehand as they operate on a first-come first-served basis, with walkers taking priority over cyclists. If you wish to stay over, you’ll be required the stamped pilgrim passport.

18- KM 0 of the Camino is actually not in Santiago but in Cape Finisterre, by the Atlantic Ocean, considered to be the ‘end of the world’ and a place of magical powers for pre-Christian communities.

19- In 2017, the Spanish Olympic Committee hosted the first Pilgrim’s relay race to Santiago de Compostela. Starting in Roncesvalles, the race is presented as a real challenge in which participants explore their limits and test values such as fellowship, solidarity and teamwork.

20- Ultreia - from the Latin ‘ultra’ (beyond) and ‘eia’ (keep going) - is the traditional greeting pilgrims say to each other to show support while on the Camino. If someone says to you ‘Ultreia’, your answer should then be ‘Et suseia’!