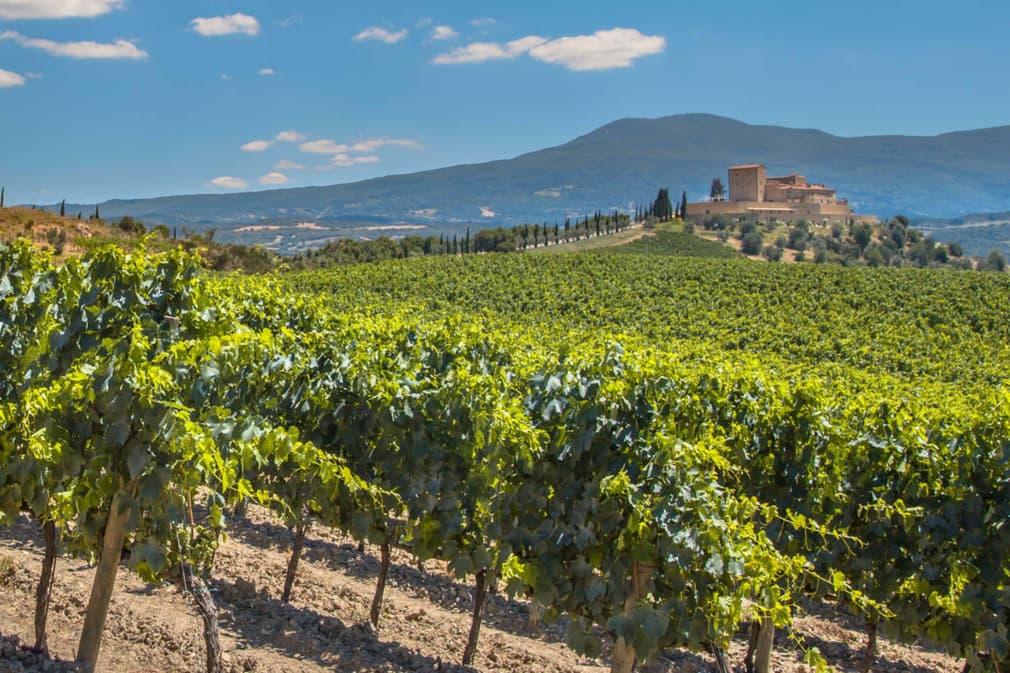 The winelands of La Rioja hardly need an introduction. Most people have tasted or at least heard about the wines from the most famous of the Spanish producing regions. Having said that, we wanted to take time to highlight our top wineries located in this beautiful corner of Spain - from vintages aged in medieval caves through to wines produced in the most avant-garde installations.

But before that, we were proud to learn that La Rioja Alavesa - the Basque region side - has been recently awarded the Biosphere Responsible Tourism label. Based on several objectives - such as sustainability, cultural diversity and social responsibility - this Unesco recognition is the achievement of two years of work showing a firm commitment to sustainable tourism and the fight against climate change. Which is totally consistent with our stated aim to take you to places that protect and benefit the communities we love.

And that’s not it, the next step is to get the whole of La Rioja’s vineyards landscape - well, at least the triangle between Haro, Najera and Logroño in Rioja Alta and the entire Rioja Alavesa - to be declared a UNESCO World Heritage Site, in order to promote La Rioja amongst the world’s first-class wine tourism destinations, and to protect its unique landscape. So we’ll keep you posted: it should happen later this year.

Getting back to the subject, here are our 6 favourite wineries in Spain’s La Rioja region:

For more than a century, four generations of the same family have been devoted to producing traditional wines made by the carbonic maceration method (whole clusters). Their 400-hectare vineyard sits in chalky-clay soil, mainly on slopes and terraces, with an ideal microclimate and exposure to the sun. One of the main highlights of this winery is the emphasis they place on caring for the environment. In 2006, Luis Cañas built a home for up to 40 of its workers, a pioneering and award-winning initiative. If you visit at harvest time, you can often chat to Señor Cañas himself, still in charge of operations, aged ninety.

Located in the emblematic Railway neighbourhood of Haro - where it all started for Rioja wine - this is one of the few wineries in Spain with a master cooper and barrel-makers on site, where you can watch them work. Set in a 200-year-old stone and oak building, it maintains time-honoured methods for producing its wines. Bodegas Muga owns 620 acres of vineyards but it also has control over 370 acres owned by vine growers in the area, which are located on the foot of the Montes Obarenses.

Surrounded by a vast area of vineyards overlooking Samaniego and at the foot of the Sierra de Cantabria mountains, a 400m2 glass box emerges from a spectacular location in Rioja Alavesa. Baigorri is new place that was designed and built by the architect Iñaki Aspiazu. Very eco and modern, it uses gravity, which allow the grapes to be fermented completely intact and avoids the use of mechanical methods of any kind.

Located within the same building as the current tourist office, Bodega El Fabulista is in fact an atmospheric labyrinth of cellars under the streets of Laguardia - also known as ‘the wine capital’. This winery, which has been specially refurbished to receive visitors, processes its wines according to the older traditional methods, with cellars carved into the rock. The ground floor of the winery has two grape presses - dating back to 1903 - that produce 32,000 litres of wine per year. At a depth of seven metres, you’ll find three parallel and interconnected vaults: one is used for processing, another for ageing and the third one is used for wine tasting.

Designed by Spain’s famous architect Santiago Calatrava, this winery was inaugurated back in 2009. Similar to the iconic Gehry-designed Marqués de Riscal hotel, the winery Ysios wanted an iconic, attention-grabbing avant-garde building. Also known as ‘bodegas author’, these wineries combine production, tasting and sale of the wine they produce, generally located in the same vineyards. Bodegas Ysios, whose name is a tribute to the Egyptian gods, was built at a vineyard of over 120 hectares.

The story of this winery is inextricably intertwined with the history of Rioja wine. The founder, Marqués de Murrieta himself, imported production techniques from Bordeaux into Spain and produced his first wine in Logroño back in 1852, then moved into the Ygay Estate in the late 1870s. More than a century later, the Cebrián-Sagarriga family took up the mantle and began a 7-year restoration of the castle, which was finished in 2014. Located in the heart of La Rioja, it is surrounded by 300 hectares of vineyards. Ygay Castle houses the whole of Marqués de Murrieta’s winemaking history, the historic production cellar, the cask ageing rooms and a collection of wines from 1852 to the present.

Take note that the wineries are by no means the only attraction of the area, and that La Rioja has a lot more to offer. Here you will find everything from the outstanding old town and monuments of Laguardia, through to archaeological sites such as the La Hoya Settlement and the prehistoric dolmens of Elvillar and Leza. Add to that the medieval town of Labraza (which was named as the ‘Best Walled City’ in the world), the so-called ‘La Rioja Balcony’ and the Marqués de Riscal cathedral in Elciego, where bottles of wine have been stored since 1863. Other attractions include the bicycle trails which set off from Labastida, vinotherapy, and taking a hot air balloon ride over the vineyards in the town of Haro.

Our Rioja holidays   Get in touch   Subscribe to The Pothole

All you need to know about Rioja wine