San Fermin festival Pamplona - the encierro or running of the bulls 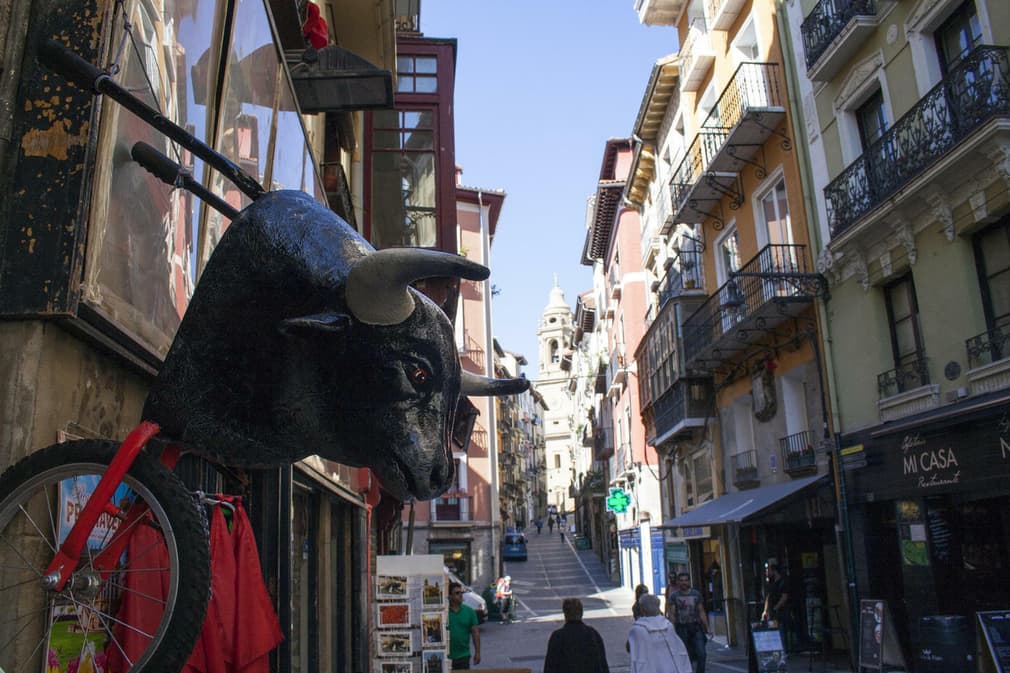 You've almost certainly seen images of Pamplona's running of the bulls. You may have read the descriptions in Hemingway's "The Sun Also Rises" but perhaps you don't know about the whys and the wherefores of this most famous event. Here's a quick guide to the things which perhaps are not obvious at first glance.

First of all, San Fermin is the patron saint of Pamplona so this whole event is in honour of him. Sort of. He was an early convert to Christianity, from Pamplona, who became a bishop and was martyred in Amiens, France. His actual saints day is in October so that's when the religious festivities were until 1591 when someone decided that it would be better to have the fiesta when the weather's nicer. So it was that the San Fermines were brought forward to coincide with the summer livestock fair in July.

There's much more to the San Fermines than just the running of the bulls but that's a tale for another day, for now I just want to talk about the Encierro.

Every morning between the 7th and 14th of July bulls are set off through the streets of Pamplona. Well, not quite, it's a very specific route leading up from the corral (encierro) to the bull ring. A route of exactly 825m.

Part of any fiesta or festival in Spain was, still is often, that they have bull fights each afternoon. That's still the case in Pamplona so those bulls running up through the streets are the six bulls that will be in the bullring again later that day facing the torero.

In addition to the six bulls, they also release some bullocks a short while afterwards to run up the hill and gather up any strays and get all the animals into the bullring at which point they are coaxed over and into the corrals.

The bulls are the fighting bulls. Because it's a festival, the city will have invested a great deal of money in these bulls. Whatever your thoughts on bull fighting, it is a two sided equation. The bull fighters and the bulls. You need highly skilled bull fighters and well bred bulls to create the best corridas. Bulls are never trained, in fact they have very little human interaction at all.

The characteristics of the bull are bred into them via the female line. That is to say that a particular breeder will be known to have bulls which fein one way before charging the other. That's because they have selected to breed that characteristic in. They will pull out females at a year old or so and take them into the tiny bullrings they have on these ranches (most of them being in Andalucia & Extremadura regions of Spain). The females which display the desired characteristics are the ones which are then used for breeding.

A true aficionado of the bullfight (corrida) will take every bit as much interest in the bulls as they will in the bull fighter. They will know that the bulls from A.Martinez's ranch are known for being large, strong and aggressive with a tendency to bear right (for instance).

The point being that people running the encierro are not running in front of some tame dairy cows, these are effectively 500kg + wild animals who are frankly very disorientated and scared. They will stay together if they can. When they do stay together, what tends to happen is that they run the 825m course, a load of people sprinting ahead of them until they get into the bullring and there they are peeled off and penned up again.

It's important to remember that they aren't really charging at people, they are just going forwards to get out of this madness, that's why you will see people running alongside the bulls quite happily. It's not as if the bull is going to immediately attack anyone it sees. Unless it gets scared. The bulls get very scared if/when they get separated from the other bulls. And that's when things get very dangerous for the runners.

There have been 16 deaths in recent times, the last one in 2009 I believe. A young man from Alcala de Henares (near Madrid). Before that a young American tourist lost his life. I think it's fair to say that locals know enough, generally, to treat the bulls with the respect they deserve.

The traditional dress of the people of Pamplona is all in white with the red kerchief. People, anyone, gathers down by the encierro by 7.30 am each morning. At 7.55 the runners raise their rolled up newspapers (of which more later) towards the image of San Fermín set in a recess of the street nearby. They chant: "A San Fermín pedimos, por ser nuestro patrón, nos guíe en el encierro dándonos su bendición. Entzun arren San Fermin zu zaitugu patroi zuzendu gure oinak entzierro hontan otoi." We ask San Fermín, being our patron saint, to guide us in the bull run and give us his blessing (in Spanish and then in Euskera (Basque). They do this again at 7.57 and 7.59....

Then at 8, two rockets are fired from the corral and it's off we go!

And here's the bit they don't really tell you. First of all, it's actually not that hard to escape harm in the encierro, just be near the front and keep running. There will be many hundreds of people between you and the bulls. However, you will be roundly jeered by the enormous crowds of onlookers.

Let's not forget too that most of the onlookers, the locals at least, have been up all night - the encierro is effectively their nightcap! The crowds can therefore be, shall we say, rowdy? I think it's fair to say that a lot of the runners have at least some Dutch courage on board too though anyone smart knows to treat the event, the bulls, with respect so don't turn up drunk.

For this same reason, if anyone tries to climb up the thick plank walls erected along the course, before they are in imminent danger, they will likely get shoved back down onto the course.

For the true runners, the object is not to escape the bulls but instead to get close enough to them to tap them on the nose with your rolled up newspaper (yep, that's the deal with the newspapers). Now if you can run solo with a bull close enough to tap his nose, then you're getting a round of drinks tonight! You know that on the straight, the bulls will outrun you but there are various sharp corners along the route which the bulls have to take more slowly.

Once the last bull is inside the bullring, a third rocket is fired to say that the encierro is over for another day.

In truth most injuries happen at the narrow entrance to the bullring. It's here that people tend to slip, trip and then pile up. I can't remember seeing a better photo than this one to illustrate the point:

Notice the man in the yellow t-shirt going for the photo shot of his life. The one in blue is cool enough to be posing for the photographer. The one in the green hat seems to think that if he squeezes his eyes really tight shut, it doesn't matter that his head is sticking right up! Note too the blue gloves of the paramedic standing comfortingly by on the right hand side of the shot.

It is also an illustration though that the bulls will generally do what they can to not cause damage to other animals - that's quite a moment of show jumping for a bull!

So, that's hopefully a slightly sideways look at the encierro. When you next see it, perhaps notice the ones with the rolled up newspapers in their hands, notice the bulls that have become separated and notice the entrance to the bullring!

Of course, there is much more to the San Fermines than just the Encierro. There's also a lot more to Pamplona than just the San Fermines. Remember that Bilbao and the Guggenheim museum are only about an hour away from Pamplona...the vineyards of La Rioja also about an hour away...the stunning mountains of Ordesa National Park a couple of hours away...and the Camino de Santiago passes right through town. Be sure to call us on 01273 676 712 if you fancy a visit to this and other parts of the Pyrenees.

Our Pyrenees holidays   Get in touch   Subscribe to The Pothole