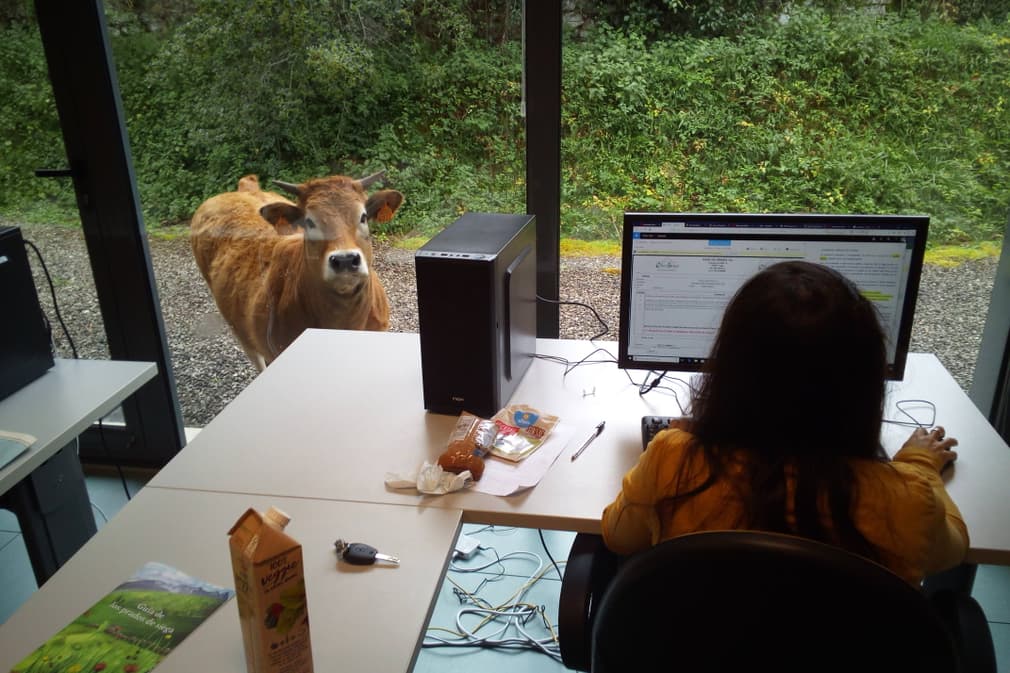 For 20 years Pura Aventura has championed the great outdoors, sharing places where nature rules. No matter how spectacular the scenery, these places have always been brought to life by a small detail, a fleeting moment which stays with you. We are proud to support Quilter Cheviot's Capturing the Moment 2019 photography competition, a celebration of exploring, of switching yourself, not just your camera, on and sharing these intimate encounters.

To celebrate the competition, Pura co-founder Diego Martín shares his experiences of life in the rural villages of his native Picos de Europa in Spain. It's an area one lucky prizewinner will get to explore with us. Enter now for your chance to win.

When we travel sometimes we search a romantic image of a destination. Often it's access to aspects of a world we miss in the places we live and work. But we want to believe it still exists somewhere. Never is this more evident than when city-dwellers holiday in the mountains of Northern Spain in search of a rural eden of happy farmers.

The reality does not always fulfil the expectation.

The past 50 years have markedly transformed many of the rural areas of Europe and the mountains of the Picos de Europa, the place I call home, are not exempt. But this doesn´t mean we cannot find inspiring stories and the beautiful landscapes we are looking for. You just someone like us to introduce you to the right people and link together the best scenery on a walking holiday. However it does mean that rural communities are much more complex nowadays.

"Rafael worries about wolves killing his livestock at night, but he also has a powerful 4-wheel drive to make his life easier, a daughter living in the capital and at night he posts on Facebook."

The change has accelerated relatively recently and so we can still find people living in the mountains in ways that will differ little from what we would have seen a century ago. There are shepherds who still spend six months alone in the hills making their cheese, away from the outside world.

In other cases, life has only changed superficially, in the form of material goods. Nature is still the playground for many local farmers, like Rafael Roiz from the village of Bejes. He is the owner of a large sheep and goat flock. He worries about wolves killing his livestock at night, but he also has a powerful 4-wheel drive to make his life easier than his father´s, a daughter living in the capital and at night he might post a picture on Facebook. Whatever changes he, like all of us, has experienced, he remains one of the nicest people you can find in the Picos and a great person to spend the afternoon with, chatting about life.

Farming is still important in Bejes and is probably the most visible activity. However its evolution means that there is normally one person per family running the farm. Many of the other family members either emigrate, a huge problem in the area, or find employment in the new sectors that now share the mountains with the farmers.

"Jessica and Javier still keep a small flock of goats, but this is more for sentimental reasons than for its benefit to the business. "

Cheese making still provides the best profitability for farming related industries. It has retained its reputation for quality alongside and a progressive industrialization that makes it an easier life than before. This has attracted local young entrepreneurs who are happy to stay in their villages and maintain a modern version of the traditional lives of their families. Jessica and Javi from Sotres are a good example of younger generations trying to live a life rooted in tradition, but driven by their own savvy and 21st century ways of thinking.

The only problem is that this production can become increasingly disconnected from the land. For example, when the milk comes from more intensive milk farms and the feed for the animals comes in trucks, instead of hay making from the local pastures. It's a justifiable progression in the search of the quality of life we'd all want. But the impact on the landscape cannot be denied. Jessica and Javier still keep a small flock of goats, but this is more for sentimental reasons than for its benefit to the business.

National park and forestry rangers have pitched up. I have worked directly with an NGO which protects bearded vultures. There's another which concerns itself with the plight of brown bears. These programmes have further mixed 'urban' and local knowledge, usually to the benefit of the rural communities and the landscape. But conflicts with the traditional farming industry can arise around wolf population management, access to land and bush fires. It impacts families, some opting to pursue administrative careers in these new organisations, others trying to sustain a living from their flocks. In one case I've seen for myself how this has ended in flocks being sold after many generations because of the pull of the city or incompatibilities with the modern world.

"Sustainable travel should create a more balanced flow of people, so that wealth can be more evenly distributed and we can strike the right balance between the needs of locals and visitors."

And then, finally, there is tourism. Which is very much our business of course. It has been heralded by local, national and even European administrators as the answer. Many farming families have opened their rural homes to welcome guests, sometimes maintaining their livestock on the side, other times selling off their animals and focusing on their hotels. Along with restaurants, hiking and adventure sport, this has created thousands of jobs in the region during the busy summer months.

But seasonal tourism also creates a massive contrast between high season, when all the locals are super busy and all the public events take place, and a long off season when some people migrate and others remain unemployed. Some villages look like ghost towns. Worse than this, some schools close because young people don't remain fixed in the area and access to housing is complicated since you have to compete against the high prices of summer rentals.

This is where we believe sustainable tourism has a role to play. One of its goals should be to create a more balanced flow of people, so that wealth can be more evenly distributed and we can work closer together to strike the right balance between the needs of locals and the chances for visitors to interact with this beautiful, engaging and surprisingly complex region.

I write this from the Pura Aventura Spanish office in the Picos. The staff and many of our local guides are part of a neo-rural population which has fled the cities to live in the rural world. We sometimes struggle with a bad internet connection. We have teenage kids who want to move to the city. And then we always have to balance our internal challenge of sharing our land, without helping to destroy it.

Yet working in a natural paradise has its advantages too. Instead of commuting you have time for a hike in the Picos in the afternoon. After work you can go down to the beach. And our local office is often visited by cows.

Meeting María Jimenez ...and her art