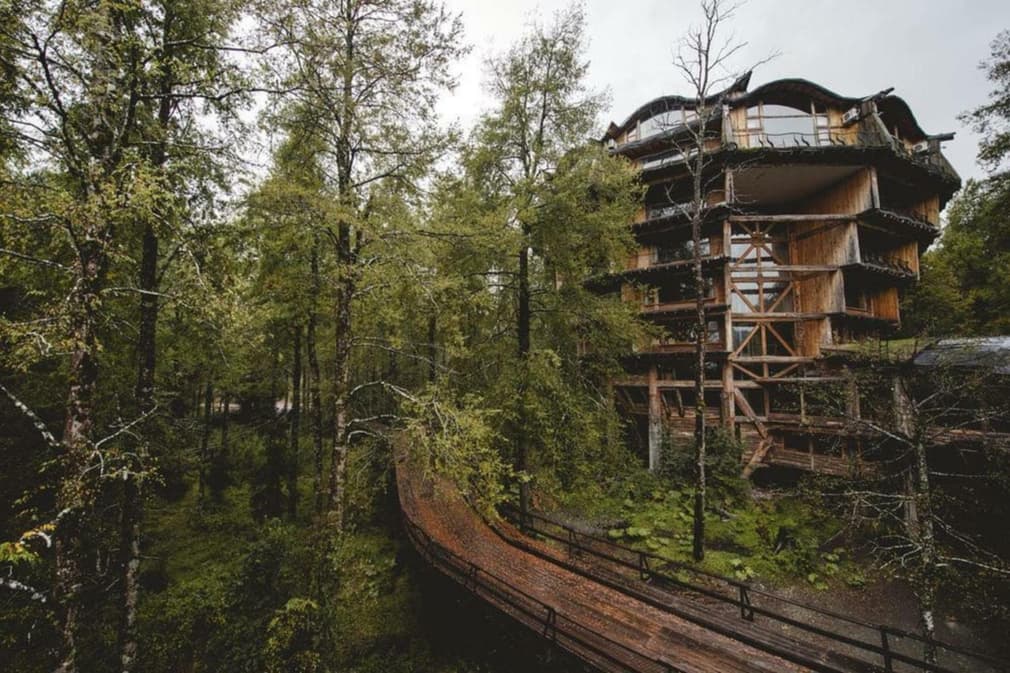 Working in travel for over a decade I’ve been lucky enough to stay in some pretty plush hotels around the globe. And of course I like 400-thread count sheets or a bathtub I can do lengths in as much as the next chap. But I can honestly say that it’s not the swanky Sofitels or the ritzy Marriotts that linger longest in my memory.

Those that do are often much simpler. The mountain station in Sweden, which can only be reached by snowmobile across a frozen lake. The lighthouse on a rocky islet on the tip of Newfoundland. Places whose location tends towards the isolated; places that feel special, perhaps even a little magical. Invariably surrounded by natural beauty.

Once such place awaited me on my most recent trip to Chile, which had me driving north from the picture-postcard scenery of the Lake District to Santiago, via volcanoes, vineyards, forest and rugged coastline. Tucked away in the mountains, my second destination was the little-known, quirky enigma that is the Huilo Huilo Biological Reserve, which I had long been keen to visit.

The reserve covers some 100,000 hectares of rare and precious Valdivian rainforest, which the Huilo Huilo Foundation works hard to conserve. It’s nestled in the midst of the Chilean Lake District, but bears little resemblance to the more famous Pucon and Puerto Varas, which lie to the north and south respectively. Huilo Huilo feels like a little pocket someone has hidden away on the long trouser leg that is Chile.

It’s quite an unusual set-up here, with the foundation behind the reserve also behind the accommodations, which themselves are, shall we say, a little unorthodox. From the huge ‘baobab tree’ of Nothofagus, to the forest and waterfall which tumbles down the side of the ‘Montaña Mágica,’ (‘Magic Mountain’), the design of the various lodges verges on the extraordinary. When you turn the corner and come across the ‘Reino Fungi,’ (‘King Mushroom’), I did rather wonder whether the architects had been foraging for food in the forest while drawing up their plans!

Somewhat more muted in their design are the rather lovely cabins of Nawelpi, tucked away in a secluded part of the forest. Expansive and very comfortable, each has a private deck with its own rustic hot tub, perfect for listening to the sounds of the river running past or the rain falling on the leaves (it is indeed a rainforest). Based here you can enjoy meals and a drink by the fireplace in the ‘club house,’ replete with a huge tree growing through the middle of the building.

That’s really a theme that runs throughout the lodges, the immersion in the surrounding nature. With wood and water ever-present, sometimes it’s hard to tell where the construction ends and nature begins. This is perhaps most true in the spa, where you can drift from floating in the inside to the outside pools almost without noticing.

It’s not just the beauty of the nature that’s celebrated here though, but also the mythology. Throughout the place there are carvings of sprites and woodland creatures, and you wouldn’t be too surprised if you were walking along a trail and bumped into a hobbit. This makes it sound horribly naff I know, but somehow they get away with it.

It’s the sort of place that brings out the inner child in us if we let it – and definitely somewhere which would enchant your average child. Roaming around the main lodges and their pools could easily keep them busy for a day or two, but there’s much more to see and do outside, with rafting, zip lining and hiking to waterfalls all minutes away. Throw in mountain bikes, horses and the chance to summit a nearby volcano, and you really have something to occupy all ages and energy levels.

Something that really struck me when I was there was its appeal to mixed groups, i.e. multi-generational parties. I saw everything from a babe in arms to folk who would have been adults some time before Pinochet came to power. With the range of activities on offer and the number of places in which to relax, it made a lot of sense; it’s a rarity to find somewhere that can cater for such disparate demographics.

On my recent research trips, I’ve taken to using a Dictaphone to record my impressions of hotels, given my propensity to forget details and features I’ve seen. When I played back my recording on Huilo Huilo, a couple of things leapt out at me. The first was that I’d rambled on for twice as long as for any other hotel on the trip. The second was a single line, ‘Frankly, I’ve never been anywhere quite like it.’ Which pretty much says it all.