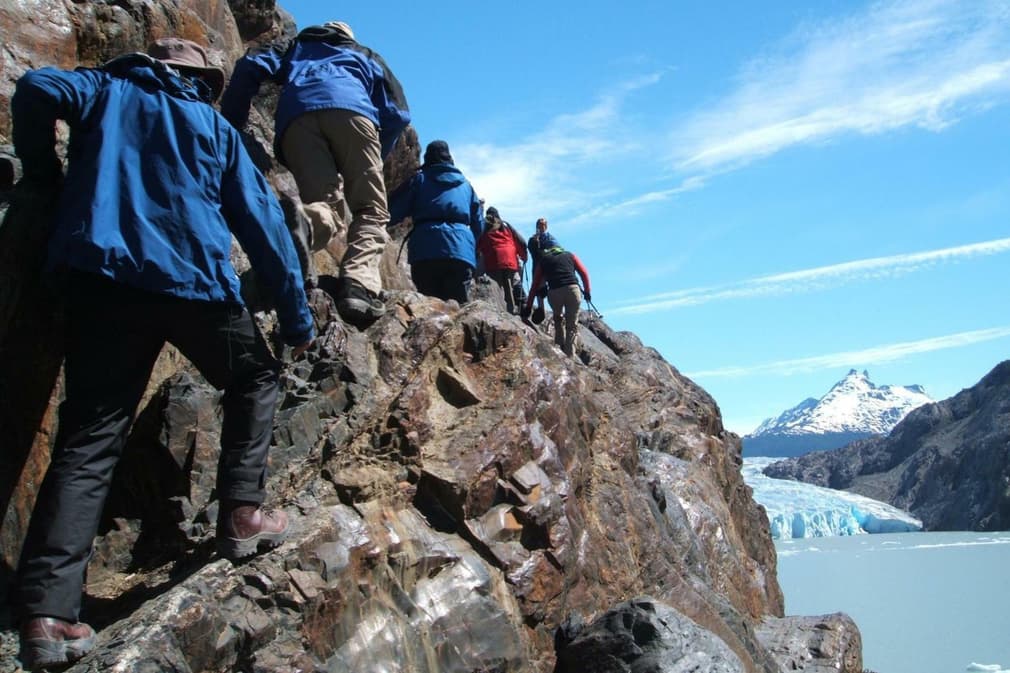 Our guide to Chile's Patagonia concentrates on the most emblematic and beautiful part of southern Patagonia: Torres del Paine National Park.

Within the confines of this vast park you can see every aspect of Patagonian landscape from glacial lakes to icebergs to mountains and dry grasslands.

The birdlife is incredible, from the Austral parrots perched in dwarf beech forests to the condors soaring high over the mountain peaks.

Guanacos, cousins of the Llama, roam the rolling grasslands of the southern park.

Majestic Puma range across this same area though are very rarely seen.

While there is far more to Patagonia than just Torres del Paine, there are few places in this world to match the beauty of the park.

The hub of the park is the Cordillera del Paine - basically a lump of mountains which sit right at the end of the Andes as it blends into the Patagonian Steppe.

Immediately to the west of the mountains is one of the spurs of the southern Patagonian icefield, the largest non-polar icefloe in the world.

To the south is an area of lakes and rolling hills particularly rich in fauna such as Puma and Guanaco.

To the east of the park is basically the dry pampa or grassland that one often associates with Argentine Patagonia (Torres del Paine borders Argentina).

To the north are more mountains, in fact Torres del Paine really back onto the Fitzroy range, a famous mountain destination on the Argentine side of the frontier.

To explore the park it is best to get out and about into the fresh air - this is one of the least polluted places on earth after all.

For a five day walk, the famous 'W' route between the glaciers and mile high Torres is ideal. This is the route we include on our Atacama Patagonia Chile walking holiday.

For a longer and more challenging hike, the Torres del Paine Circuit is the real deal as you circumnavigate the entire Paine massif over the course of 10 days.

Pura Aventura offers the Circuit as one of its most memorable walking holidays in Chile.

Alternatively, you can base yourself in one place and explore from one of the comfortable hotels or lodges just to the south of the park.

This is an option we offer on our Chile and Argentina combination holiday.

People in Patagonia reflect their surroundings in a way that you don't see so much in more tame environments.

This area was originally populated by cattle ranchers and you do still get a sense of the frontier lands down here.

People are used to incredibly solitary lives spread out across the plains and therefore do not generally indulge in small-talk.

Proper Gauchos/Baqueanos (Chilean cowboys) really only talk when there is something to say although they seem to be able to make silence perfectly friendly.

You will generally find an incredibly warm welcome in Patagonia, it will just be delivered in a way with which you are unlikely to be accustomed.

The great tradition in Patagonia is to drink maté (pron. mah-tay), a sort of intense miniature cup of tea drunk sociably with everyone sitting in a circle.

The form is that one person is appointed pourer, they fill the cup (the maté) with very hot water and pass it to the first person.

Rather than drinking from the lip of the cup, you drink through a metal straw, called a Bombilla.

It will generally take two or three slurps to empty the mate at which point the cup is passed back to the pourer who refills it and passes it to the next person.

This continues, with the strength of the mate gradually easing, in a gently sociable way.

The weather in Patagonia is extremely variable, from icy wind and rain one moment to warm sunshine the next.

Bear in mind that the area is basically at sea level and at the same relative latitude as Manchester or Birmingham so conditions are not necessarily particularly extreme.

What does make Patagonia wild is that the Southern Patagonian Icefield terminates here so there is a massive area of glaciation just to your north.

Add to this the fact that there is no landmass between here and New Zealand and you have a recipe for some pretty potent weather systems.

The weather defines the physical beauty of Patagonia as it defines its people. You must not travel to this part of the world expecting clear weather.

Most of the time, rain sweeps in and then sweeps out again so you will see the mountains and glaciers in every imaginable light.

However, it is also possible that you get stuck under a weather system and it is cloudy and damp for days on end.

This isn't a place for the faint of heart.

In winter (Jul-Aug) temperatures range from 5ºc-10ºc during the day with relatively low levels of rainfall, and dropping to below freezing at night.

In summer (Dec-Mar) temperatures are a more moderate 10ºc to 20ºc but rainfall is more common.

These are average figures - inside the park there are a range of microclimates which create more extreme conditions.

If exploring the remote side of the park (on the Circuit) you can expect nighttime temperatures close to zero, even in summer.

Cold winds are very common near the glaciers and higher up, for instance around the Torres.