History of the Galapagos Islands 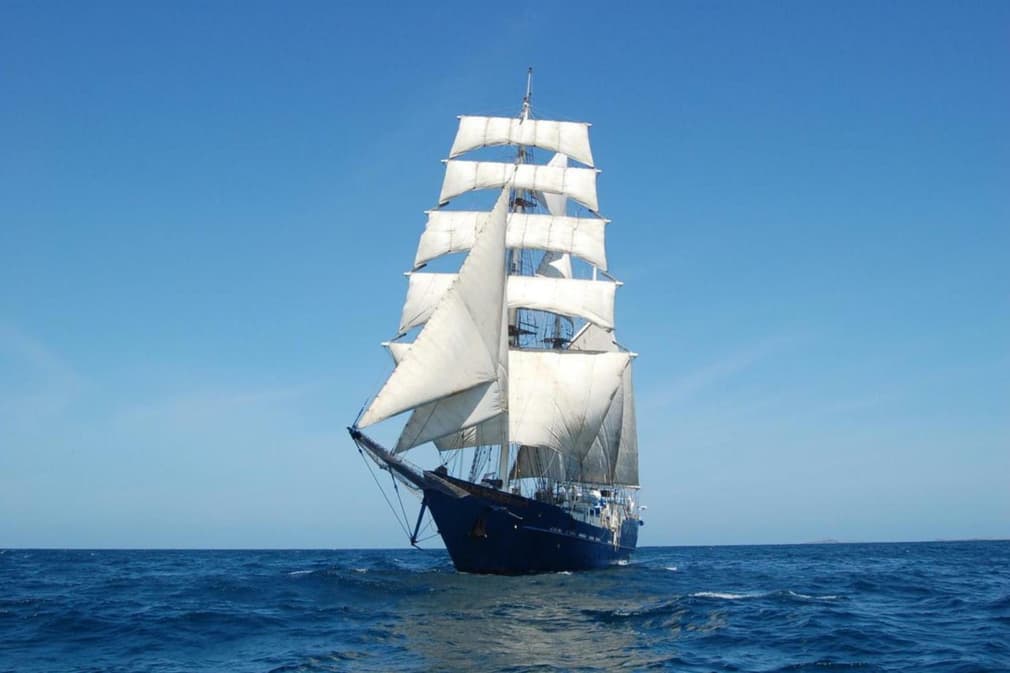 In 1535, Fray Tomás de Berlanga, a representative of then King Charles V of Spain and 'Bishop of Everything Between Panama and Peru,' set out for Peru to resolve a territorial dispute between Francisco Pizarro and Diego de Almagro.

They sailed down the coast for six straight days before strong ocean currents blew the ship off course and right into the islands, where His Grace immediately set out to fill his empty water casks on what he considered as such uninteresting islands that he didn’t even claim them for the King. In fact, he is quoted as having said about them:

“It seems as though at some time God had showered stones; and the earth that there is, is like slag.”

Due to their inhospitable nature and lack of water, the Spanish paid the islands little attention, giving them the name 'Las Encantadas' or bewitched islands.

This was due apparently to the strong currents and light winds which made them hard to find, appearing as though it was the islands, rather than the ships, that were moving. On the other hand the European sailors, pirates and buccaneers found them to be a useful hideaway, especially as they had by this time located watering places on Santiago, Floreana and San Cristobal.

The first intentional and extended visit to the islands was made in 1683 by an English buccaneer vessel, the Batchelor's Delight, under Captain John Cook; she numbered amongst her crew William Dampier, Lionel Wafer, Ambrose Cowley and Edward Davis, all of whom would leave us with literary records of their visit.

Dampier was the first to provide us with an accurate description of the islands and their fauna and flora. In 1687, William Hacke published a Galapagos map based on Cowley's visit there in 1684. Although not very accurate, it took more than 100 years until a better version was prepared by Aaron Arrowsmith for James Colnett's book published in 1798.

After the voyage of HMS Beagle the first truly accurate map was published by the British Admiralty based on Captain Robert FitzRoy's detailed survey of the islands.

As demand for European goods grew, normal trade progressively replaced piracy and those few islands which had supplies of water came to be heavily used by new breeds of seamen; the whalers and seal-hunters.

Whaling was a highly profitable business in the first half of the 19th century but it caused decimation not only of the whales but also of the giant tortoises, which were used as food by the whalers owing to their ability to survive for long periods without food or water.

In 1846 it was reported that none at all were left on Floreana, Santa Fe or Rabida. The killing of tortoises for their oil continued into the early years of the 20th century, by which time the populations of Floreana and Fernandina had disappeared, and those on most of the other islands were severely reduced.

Visits to the islands were much more frequent by now and increasingly their purpose was scientific and strategic as well as commercial.

A new period began in 1832 when Ecuador proclaimed its sovereignty over the islands. There were only a handful of permanent settlers at that time but their number had increased to around 300 by 1835 when the HMS Beagle arrived with Charles Darwin on board.

Darwin spent five weeks in the Galapagos collecting and preserving specimens from four separate islands. This started the process of enquiry which led him finally to conclusions published in On the Origin of Species by Means of Natural Selection in 1859.

Meanwhile, the Ecuadorian colonists had grown in numbers.

A series of attempts were made to exploit such crops as orchilla (dyers' moss) and sugar, but none lasted long and several ended violently.

Only fishing and subsistence farming on four of the larger islands; Santa Cruz, San Cristobal, Isabela, and Floreana was able to sustain people for long. This resulted in the population growing very slowly so that by 1955 it was only some 1500. In 2006 there were 19184 permanent residents in the populated areas of the archipelago.

While some scientific work, mainly the collection of specimens, had been going on since Darwin's visit, the first expedition that made a serious attempt to catalogue the flora and fauna of the islands was the expedition of the Californian Academy of Science in 1905/06 under the leadership of Rollo Beck, aboard the schooner Academy.

It is from this expedition that we first learnt of the truly remarkable nature of the islands. In 1923 and 1925, William Beebe led two expeditions for the New York Zoological Society and wrote two books on the islands, 'Galapagos, Worlds End' (1924) and 'The Arcturus Adventure' (1926) which provide us with fascinating and eminently readable accounts of the islands by a trained observer.

With the construction of the Panama Canal in 1914 the Galapagos Islands became much more accessible. Following the First World War, a number of European settlers arrived in the islands; firstly there was a group of Norwegians who set up a fish canning factory on Floreana.

When this failed a number of them either stayed on or returned later and settled on Santa Cruz. A number of German settlers also arrived in the 1930's - the Wittmers on Floreana and the Angermeyers on Santa Cruz established themselves permanently and their descendants remain a part of the social fabric of the islands. However the best known or most notorious were two 'couples' who settled on Floreana.

Friedrich Ritter, a dentist, and his partner Dore Strauch arrived in 1929, and the 'Baroness' Eloise Wagner-Bousquet who arrived with her two lovers in 1933. Of these five people, three died mysteriously on Floreana, one died as a castaway on Marchena and only Dore Strauch returned to Germany alive.

With the outbreak of the Second World War and the joining in of the USA after Pearl Harbour in 1942, the Galapagos gained strategic importance to maintain control of the sea lanes to Panama and so the USA received permission from the Ecuadorian government to construct an air force base on the island of Baltra, just north of Santa Cruz.

When the Americans withdrew after the war, all of the island residents were allowed to remove one of the many wooden buildings from the base, and for the next 40 years or so these clapboard houses were visible on all the inhabited islands.

With Ecuadorian sovereignty reestablished, having declined a US purchase offer, the site now serves as the main airport for the archipelago.

In 1968 one of the two runways was resurfaced and regular flights from continental Ecuador began, originally on a fortnightly basis serving the first regular tourist vessel, the Golden Cachalot, and then in 1969 on a twice weekly basis when the larger Lina A came into operation.

Today there are 3 or more flights each day to both Baltra and the new airport on San Cristobal.

The rise of fishing, farming and tourism

In the post-war era the population grew slowly with a number of other European and North American settlers arriving, as well as larger numbers of Ecuadorians who came out to fish and farm.

At that time the economy was largely based on fishing for 'bacalao', a rock bass salted and dried, then shipped to the mainland as a traditional Easter food. In the 1960s a spiny lobster fishery was added, with the frozen catch exported.

Other inhabitants lived on subsistence farming with some exports of coffee, and later, cattle. The arrival of tourism in the late 1960s and early 1970s brought people and economic prosperity. As the industry burgeoned in the 1980s and '90s, and as new fisheries were developed, the population grew rapidly, so that by the turn of the century it had risen to some 20,000.

In 1975 the islands were declared a province of Ecuador which had the effect of bringing mainland politics out to the islands, something that has had a mixed impact on the conservation of the islands.

The islands had already been declared a National Park in 1937, but at the time nothing was done to implement that decision or to protect the fauna and flora. However, a visit in 1957 by Drs. Robert Bowman and Irenaus Eibl-Eibesfeldt, under the sponsorship of the UNESCO, resulted in the establishment in 1959 of the Charles Darwin Foundation (CDF) with a mission to preserve the remarkable flora and fauna of the islands.

The Charles Darwin Research Station (CDRS) was established on Santa Cruz in 1960 to provide the knowledge and information that are so essential to the conservation of the islands ecosystems.

In 1964, the Californian Academy of Science sent the largest ever expedition to Galapagos, resulting in a large number of scientific papers, as well as the first flora of the islands, which expanded our knowledge of their natural history and started the 'modern era' of scientific and conservation research in the islands.

In 1968 the Ecuadorian Government established the Galapagos National Park Service (GNPS) which gradually took over the hands on conservation role that the CDRS had initiated in the early 1960s.

They are a Biosphere Reserve, a Whale Sanctuary, a RAMSAR site and they have been designated as one of only two Particularly Sensitive Sea Areas (PSSA) by the International Maritime Authority. In Fernandina they possess the largest 'near pristine' island in the world.

On the 26 June, 2007 the World Heritage Committee inscribed Galapagos on UNESCO's List of World Heritage Sites in Danger, with a view to mobilising support for their conservation.

The future of Galapagos

Today the islands boast the highest standard of living of any province in Ecuador but, with a rapidly growing population, conflicts have inevitably arisen between the population needs and the fragile Galapagos ecosystem.

The pressures on the archipelago's natural resources threaten their biodiversity and ecological integrity, as well as the sustainability of the natural resources upon which the livelihoods of the islanders depend.

As the population grows, these pressures are likely to increase rather than decrease. More than ever there is a need for all involved to work together to influence decision makers, in order to preserve these unique and beautiful islands for all their inhabitants and for the world.

Best boats in the Galapagos Islands

Are land-based trips to the Galapagos Islands sustainable?