After three unanswered shouts of "Miguel!" and a hopeful "buenas tardes?", I wandered tentatively into the dusty courtyard of the small weaving workshop. I heard a slight rattling sound being emitted from a small door up to my left and out shuffled the hunched figure of Miguel Andrango. He slowly eased his way down the metal steps, bringing his diminutive frame into sharper focus. I immediately felt bad for having seemingly awoken him from his afternoon slumber. I was evidently his only visitor of the day.

We perched on a pair of stools to the side of the courtyard and made our introductions as the rain began to fall. I clocked an array of timeworn hand tools scattered on various workbenches. There was a pile of thistle carding brushes gathering dust opposite me, a relic of days gone by.

"Miguel doesn't fit the picture-perfect stereotype of an Adean weaver. His clothes are muted and his baseball cap advertises legal assistance for accidents."

Miguel is anything but a relic. He is, despite his advancing years, still very much an active presence in one of the few remaining traditional family-run workshops in the highlands. He and his workshop stand in stark contrast to the mass-produced brightly-coloured tourist fodder on offer down the road at the Otavalo Market. He is not a photo op. His aspect doesn't fit the typical picture-perfect image of a rural Andean weaver. He is shy, his clothes are muted and his baseball cap sports the name of a legal service offering representation for accidents. And yet, he has been here for decades, tucked away behind an unassuming facade in a tiny village with seemingly few redeeming features. 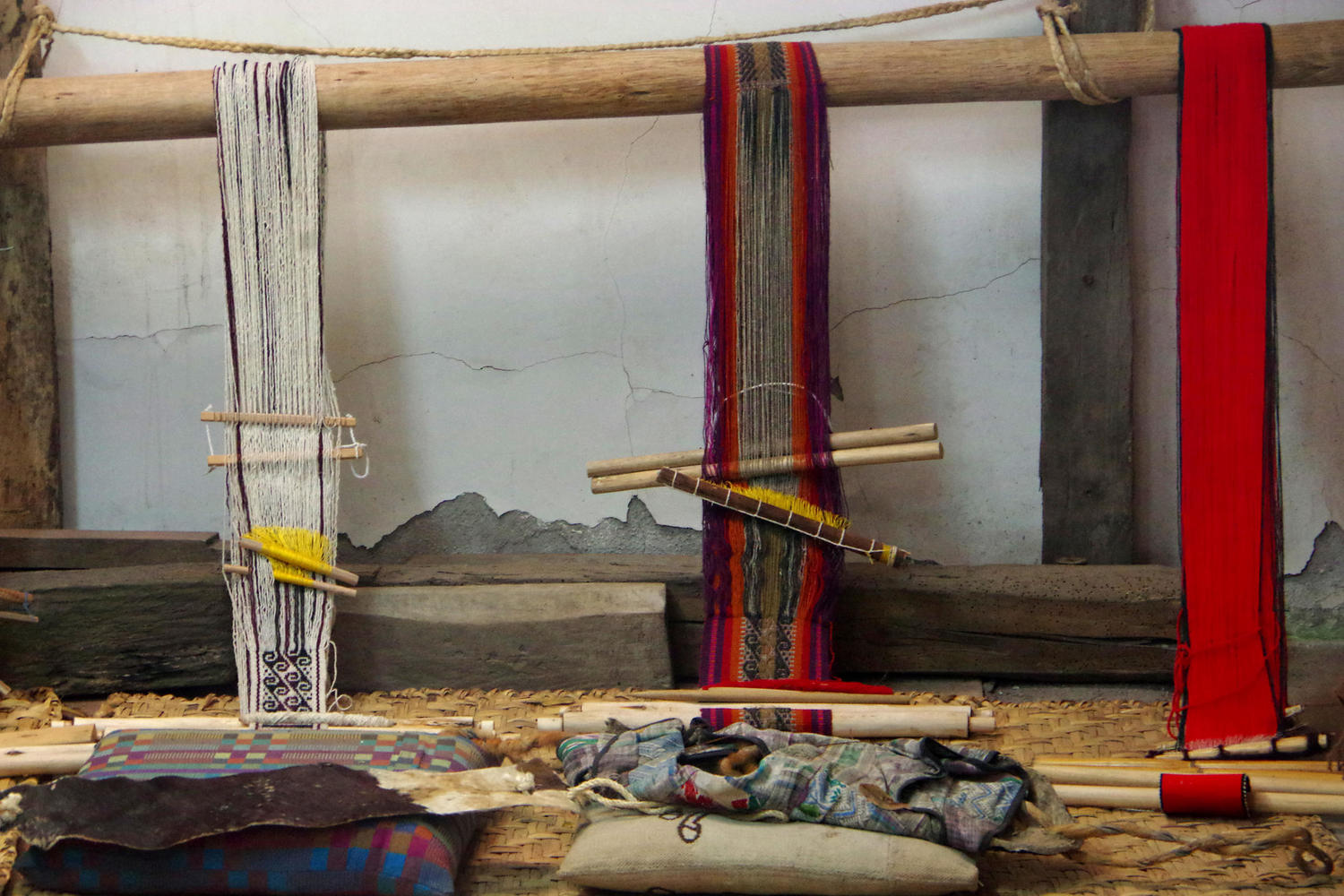 Miguel is following in the footsteps of several generations, linking his departed ancestors with the two generations of descendents who share the workshop with him. One of those family members is his amiable daughter Luz-María. I tapped her phone number, handwritten on the brick wall, into my mobile and a bright and friendly voice answered. Just five minutes later, she was in our company, dressed in a crisp white embroidered top, enlivened by colourful flowers and wrapped in a perfectly-pressed silk shawl. She exchanged a few words in Quechua with Miguel and then beamed with pride when I asked her about the weaving school they are attempting to establish.

We stepped into the workshop and I was led through the weaving process, from washing the wool in a local stream with the naturally-occurring soap of an agave tree to the carding, dying, spinning, warping and weaving.

"He showed me the weavings being created by his 12 year old grandchildren. I immediately thought back to what I was capable of creating at such a tender age." 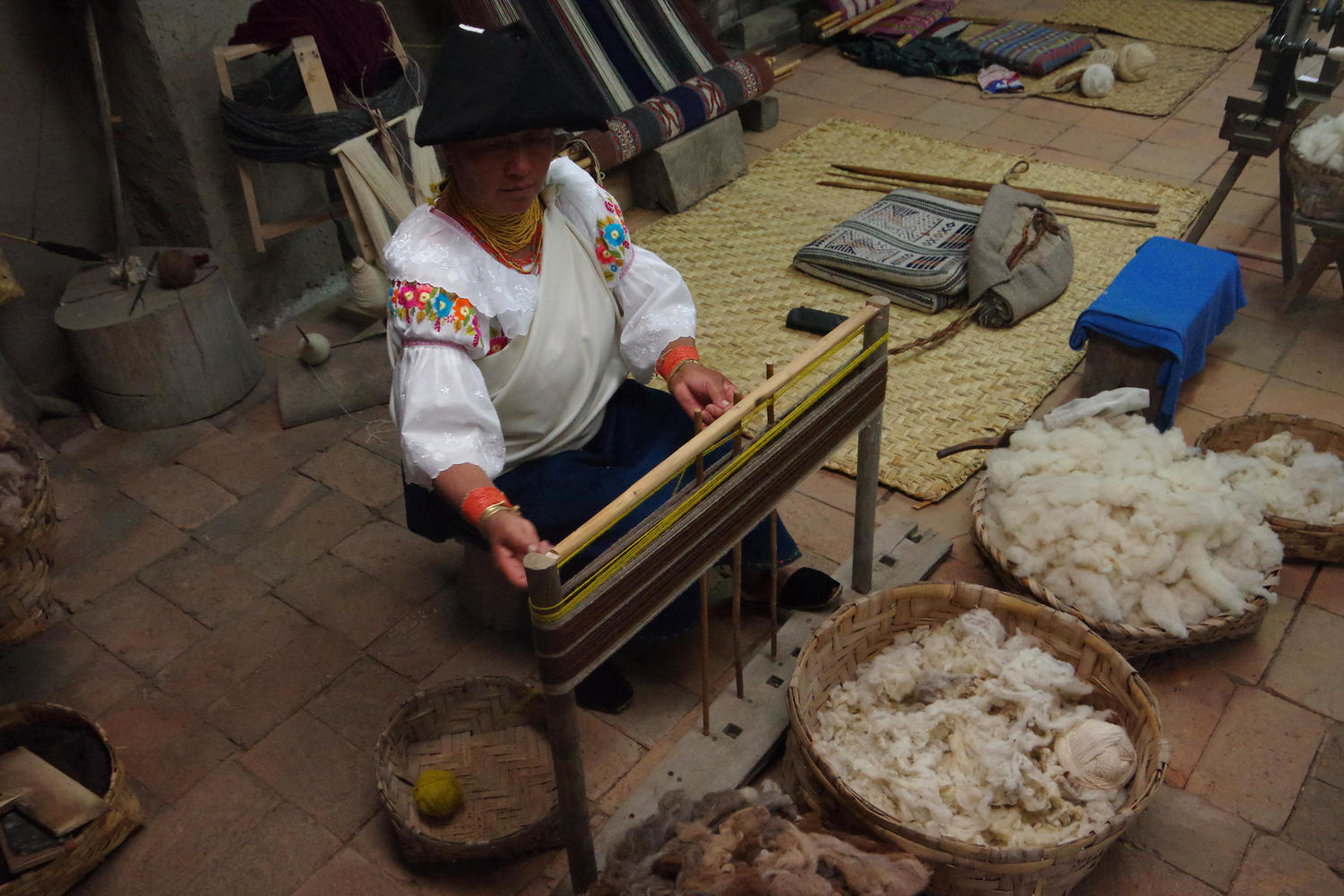 Throughout the conversation, the continued influence of departed family members became apparent. The bronze pot used for dying the wool has been passed down from Miguel's great-grandfather. The loom was created by the same relative from local materials including wood, leather, agave fibres and a hide from a bull's head. Miguel's own grandfather invented the mechanical machine on which five-metre lengths of wool are spun. Even the designs, based largely on the symbols of Inca mythology, are passed down through the generations, without ever being written down.

At the far end of the room are the complex weavings of Miguel's 12 year old grandchildren, the next generation of budding weavers. It made me wonder what I was able to create at such a tender age. The family business is in good hands.

Miguel moves slowly but purposefully as he spins the long strands of alpaca wool. In doing so he retraces the steps that he has taken for decades, and which his ancestors would have taken centuries earlier. There would have rarely have been an audience, as there was today. The onset of age has slowed his rhythm, but the dedication and precision remain. Son-in-law Rafael steps in for the weaving demonstration. He too is in no rush. 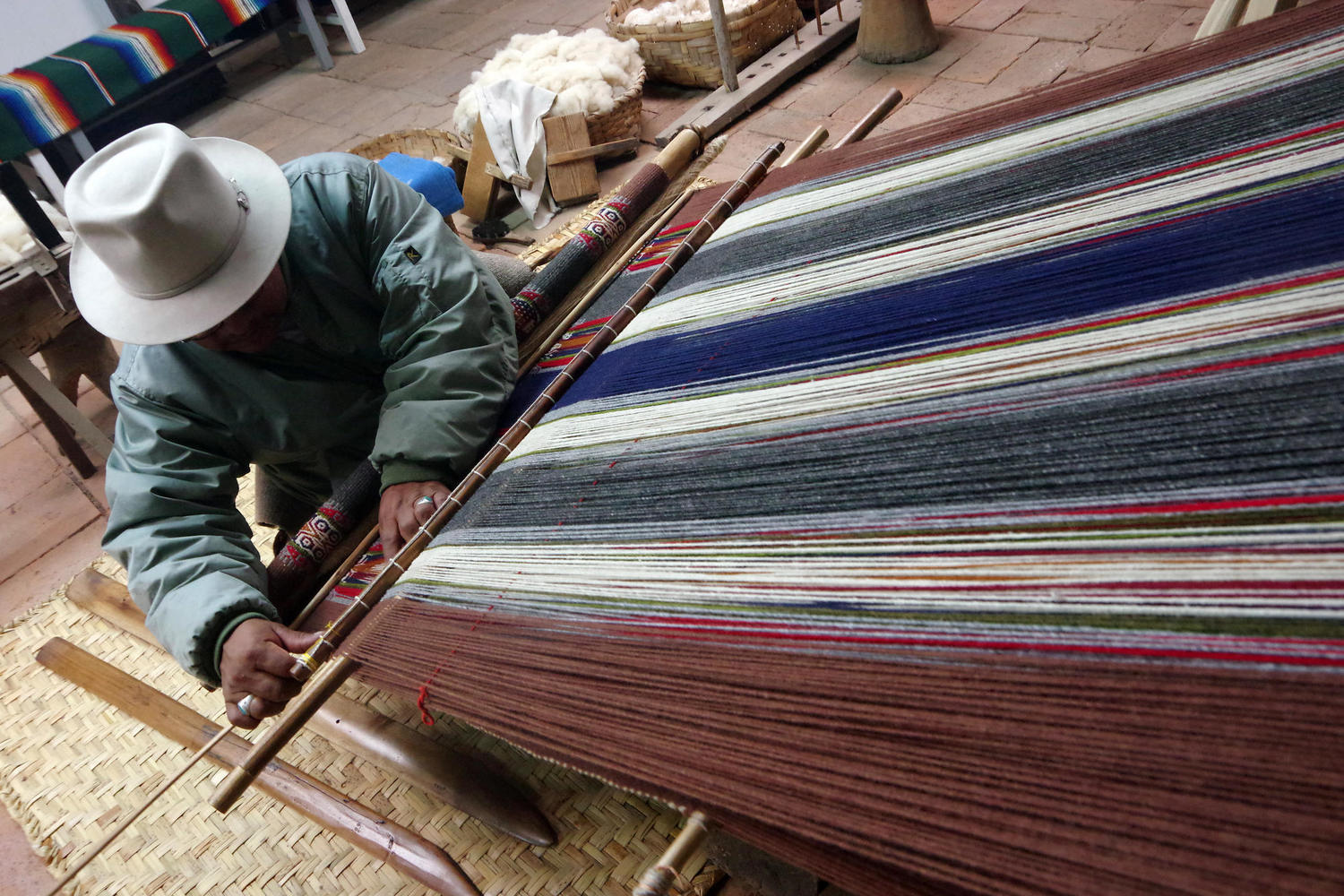 How to visit the weaving workshop

We'd love to introduce you to Miguel, Luz-María and Rafael as part of your holiday to Ecuador. Our Ecuador Uncovered itinerary would be a good place to start, mainly because it includes time at a lovely B&B surrounded by farmland above the town of Otavalo.

A good way to approach your time might be to enjoy a walk around the rim of a spectacular crater lake en route to Otavalo, resting your limbs by the fire or in the Japanese hot tub on arrival. Then the next day we can walk through farmland to the Otavalo animal market, the proper (non-touristy) part of the market. It is a huge weekly cultural event and one of the best ways to learn about local life in the highlands. From here we could shun the cheap mass-produced goods of the Plaza de los Ponchos and instead head to the tiny village of Agato and the weaving workshop. Your time could then be bookended with a gentle walk to a local waterfall and then a more substantial hike en route to Cotopaxi National Park the next day.

If that might interest you, we'd love to talk. We've not even mentioned the Amazon, the cloudforest or the Galapagos yet...