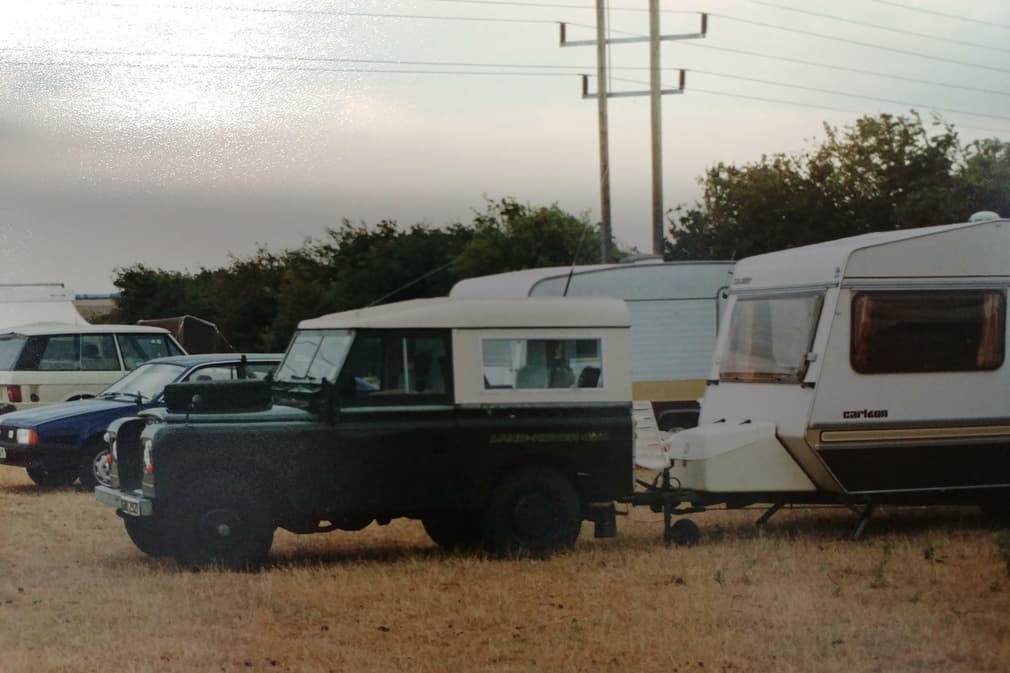 There were many features of my childhood that now seems so alien in our 21st century world. Reaching out of your bedroom window to try and get a signal on Becky's first phone. Watching the football scores on Teletext inside Dixons. The sound of dial up modems and the excitement of connecting to the internet, but only after 6pm and if no one was using the landline.

There is so much imagery from the nineties that remains etched in time; the bright red Woolworths sign, the enormous dinasours of Jurassic Park, those shiny badges of my Panini sticker album. Gladiators, You Bet and Catchphrase on Saturdays.

Of all the images which surface when I look back though, nothing holds as much fondness as the day we'd hook the caravan up to the back of the 1989 racing green Land Rover Defender and head off for our two week summer holiday. I had no idea where we were going and my sister and I never did get used to those long leather bench-style seats that shot out at right angles from the front cabin. But, boy, adventure always awaited.

I've come to better understand the importance of those annual sallies out into the great British countryside. As a family, our time at home often overlapped by no more than an hour or so during the week. At the weekend there was always football, swimming, visits to grandparents and the allure of that Saturday night telly.

Granted, enclosing four people in a small metal box for two weeks will bring its own difficulties. And you never did quite get the hang of putting up the awning without a passionate exchange of opinions. And yes, the weather was unceasingly British. But over the years I was developing a fabric of memories which would gain in value over time, as I began to explore under my own steam.

Of course, I remember most vividly the time Becky and Dad got swept out to sea at Wells; how worried I was when the lifeboat set off, how quietly annoyed I was when I had to give her my favourite towel. That incident notwithstanding, I look back with fondness at those beach days; the racetracks I made in the sand, the epic holes I dug trying to reach Australia. I never did quite make it, but the glory was in the trying.

I can still picture the distinct flowery pattern of the sofas; the very definition of caravan chic. I remember the sound of the whistling kettle, the bobbly plastic finish on the bathroom door and the smell of those odd Railway dinners that Grandad used to supply. Everytime I see a bottle of Lilt I think of Nan. Ditto their time flies clock whenever I see mention of Typhoo Tea.

They were modest holidays by today's definition. And I probably wasn't always as outwardly excited as I could have been - visiting a butterfly farm in Shropshire for example - but I wouldn't change it for the world.

Now I have the luxury of travelling further afield. And driving through the astonishing beauty of the Bolivian Altiplano, passing turquoise lagoons, rusty mountains and wind-sculpted rock formations, is a very different proposition to watching raindrops trickling down the window as we rumbled along the M6. Cycling on the slopes of Rumiñahui Volcano is very different in scale and character to that bike ride we did along the reed beds of Norfolk one wistful August evening. The Amazon Rainforest is a few levels up, and then some, from the Eden Project.

But I learned very early on never to take these sorts of opportunities for granted. Those trips, that Land Rover, our humble caravan, showed my a world outside our Hertfordshire village. They sowed the seeds of an adventurous spirit. They showed me the value of new horizons, of different voices and exotic sights. And, most importantly, they taught me never to let rain get in the way of precious holiday time.

Besides, even back then my dreams were pretty lofty. Digging all the way to the other side of the world is no mean feat for a seven year old.

As we got older, we began to venture overseas. Of course, there was that first ill-judged February cruise through the Bay of Biscay to Bilbao. I'll always remember the harrowing crashing of plates, the aborted cinema visit and the way the sea and the sky ceaselessly swapped places out of the window. God it was awful, but the memories are so precious.

Then came the Cantabria coach trips to Italy and Spain. Each journey there and back took a day and a half. Except the last one of course, when we got stuck at a petrol station in France for nine hours with only a tennis ball for entertainment and a free shot at the vending machine for sustenance. Never again.

And in a few weeks time I get to drive you around on a family holiday on foreign shores. How times have changed. But let's agree this; let's never be too old for a family holiday.

The Big One; a 4x4 family adventure in Costa Rica

How a family holiday to Chilean Patagonia looks like

How I paused the everyday at a Norfolk campsite