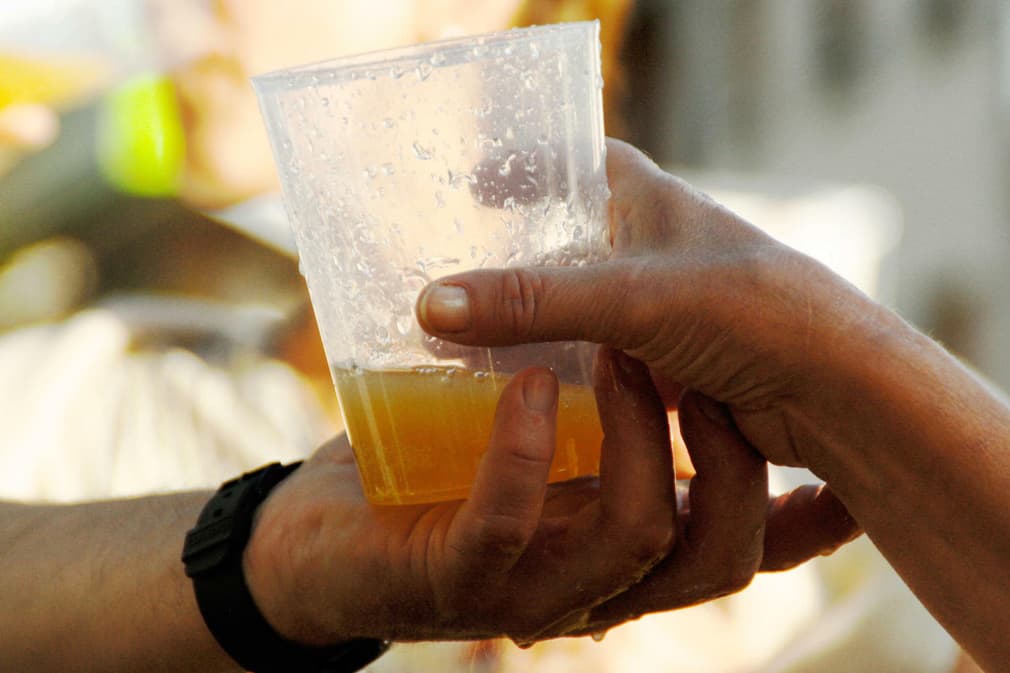 In Spain, if you have grapes, you make wine. If you have apples, you make cider. Since there aren't any vines in Asturias, they stick to making cider.

The Principado de Asturias is responsible for 80% of Spain's cider production (the other 20% relates to the Basque province of Guipúzcoa). In Asturias apple trees grow prolifically around the snow-capped Picos de Europa mountain range, which creates a climactic wall between the arid central Spanish plateau and this verdant yet rugged, rainy jigsaw puzzle of valleys.

In this part of Spain, even your best Rioja bottle can't beat apple cider. Here, Sidra is not only a drink; it is above all a way of life and a symbol of regional identity. You might say that cider is the lifeblood of Asturias. Just about every household grows apples and make their own cider. Annual consumption per capita reaches up to 54 litres though a certain amount of that ends up on the floor as we'll see later.

The making of fermented cider dates back to the Celtic times. According to legend, Celts regarded the apple tree as the tree of love and the apple as the fruit of luck. However, Asturian cider production only really took off in the early 1900s, transforming a sector comprised mainly of small artisan 'llagares' (cider makers) into a huge regional industry.

The region's cider gained DOP status in the 1990s and today, Sidra Asturiana can only be made with one or more of the 22 native varieties of apples approved by the 'Consejo Regulador de la Sidra Asturiana'. As with wine, cider makers must use their skill to combine sour crab apples with sweeter or more bitter varieties to achieve the perfect taste.

The cider-making process is a simple one. First, the fruit is washed and chopped. Next, it is softened in water and pressed. The resulting juice is fermented in barrels for around 6 months over autumn and winter until the alcohol content reaches at least a 4.5%. The only carbonation in the cider is what occurs naturally during the fermentation of the apples.

Around February or March friends, family and neighbours gather for the 'espicha' the first tasting of the cider from the barrels. Once it's ready, the cider is bottled in dark green glass bottles with no artificial carbonation, preservatives, sweeteners or unfermented juice. This is cider at its most elemental.

As a result, for the uninitiated, this sidra natural can be quite a taste sensation. In fact, it's basically undrinkable if you just pour it into a glass. What you need to achieve is a form of instantaneous aeration ' done by pouring into the glass from a great height. This pouring is called escanciar, directly translated it means 'to drain' which is perhaps not that appealing.

So here's how you escanciar:

In one hand hold the bottle of cider and lift as high as you can above your head. In the other hand hold the special cider glass (wide, thin glass) as low as you possibly can. Take aim and fire. This is where the 54 litres per capita consumption dissipates.

You can see how it's done by professionals here:

The etiquette of cider is quite particular. It is a sociable pastime so there is one glass and one nominated pourer. A large mouthful of cider is poured into the glass which is then handed to the first in the group. They drain the glass, leaving just a tiny amount in the bottom which they swill then empty onto the floor. It's said to be a gift back to mother nature though it also keeps the glass clean(ish).

The glass gets handed back to the pourer who then pours and passes the glass to the next in the group. And so it goes on. Suffice to say, it's a drink generally to be enjoyed outdoors or in a barn as it'll quickly spoil your living room carpet!

In addition to the sidra natural there are also a couple of more fancy variations of cider nowadays.

Sidra achampanada is a more effervescent cider was it is fermented twice (once in the barrel, the second time in the bottle). This raises the alcohol content and gives it more fizz. It's dry and sparkling, close to French style cider and probably the most popular in Spain today outside of Asturias and Navarra that is.

Sidra de nueva expresión is a really new-fangled cider which has been filtered and stabilized to remove the sediment. Gone are the big wooden corkscrew apple presses - in are the gleaming aluminium tanks. It's a more refined and cleaner product which is more widely commercially viable, especially for the export market. But you don't get to pour it all over your shoes so where's the fun'

Back to sidra natural it is then. Because of its crisp freshness and astringency, it can clean and cool the palate when combined with spicy, rich dishes so typical of northern Spain. There aren't many things which can clean your palate after a dish of the heavy fabada bean stew so typical of the Picos de Europa but sidra natural is one of them. And the blow your socks off blue cheese of the mountains, cabrales, actually goes perfectly with cider. Or you can also cook chorizo a la sidra with sidra - another particularly delicious example.

Whenever you travel to Asturias or the Picos de Europa, you'll come across cider. You will notice strange wooden contraptions bolted to the outside walls of bars - Heath Robinson cider pouring devices for the unskilled who don't mind being ridiculed by the locals for their pouring cowardice.

However, to fully understand how important cider is in Asturias, you need to go to the village of Nava for its annual Cider Festival. Held in mid-July this 46-year-old event draws thousands of people to talks, pouring competitions, music and industrial quantities of cider. Bring your wellies.