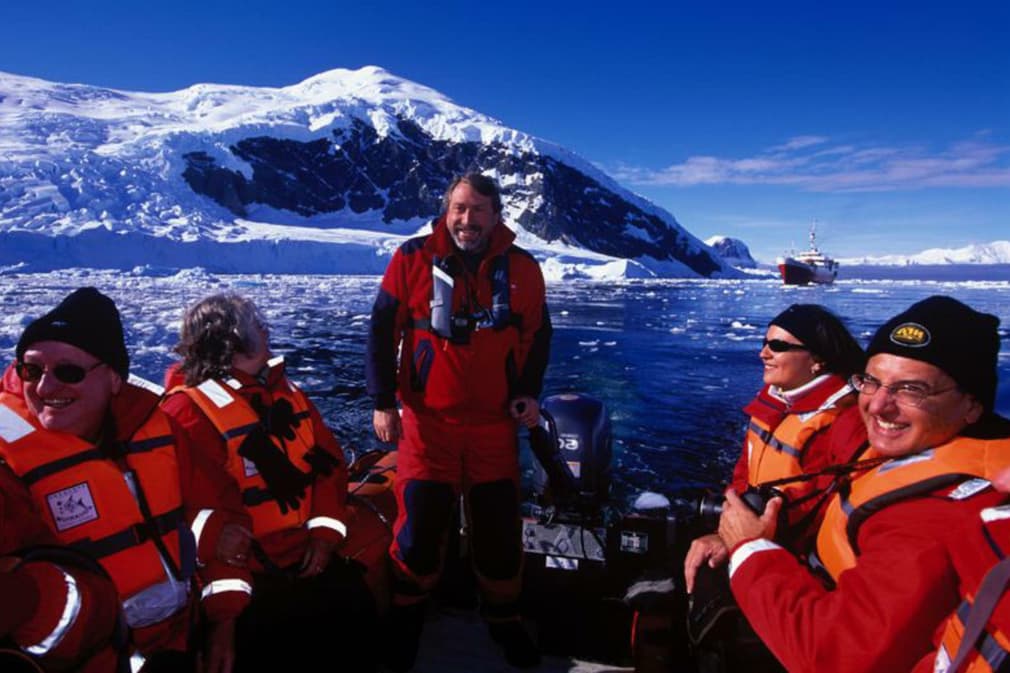 As members of IAATO (International Association of Antarctic Tour Operators), we are kept up to date with all sorts of news from the 'white continent'. Yesterday I got an email newsletter aimed at the field staff of Antarctic ships which reminded me just how wild Antarctica is.

There's a danger that we think of everywhere being tamed by human technology whereas in fact, there is still very much an element of the unknown and unpredictable when it comes to Antarctica. This is worth bearing in mind for anyone considering a cruise to Antarctica though of course it's precisely its wild nature which attracts so many of us in the first place.

This week one of the Silversea Cruises had to turn back about 8 days into a voyage to South Georgia and Antarctica because of the severity of the seas - this is in early January. Luckily nobody appears to be hurt but it's telling that despite all of the preparations and experience, a large, luxurious ship can be sent back to port by the weather.

On a smaller scale, it seems that the ice has been misbehaving this year:

" The ice conditions have been a little problematic this year and there have been a number of incidents involving ice closing in on operations. We prefer not to provide the ships’ names here but two incidents were reported in December. The first was at Brown Bluff during a blue-sky day with almost no wind. During the landing, the sea ice moved in very quickly and before the EL (expedition leader) could get all the passengers back to the landing site, the site was completely closed by sea ice. Every technique and possible landing area was used to try and get the boats and visitors off the shore, including man-hauling a Zodiac over the ice. A normal three-hour landing turned into a nine-hour effort to clear the landing site. Nobody was hurt or became hypothermic, and the passengers viewed the event as a bit of excitement and a great bonding event.

The second incident occurred close to Paulet island, where the ice conditions had prevented landing, so it was decided to conduct a Zodiac cruise, as the weather conditions were good: blue skies and no wind. The ice, however, was moving quickly and within 30 minutes of the Zodiacs being in clear water, the ice had moved in. The boats started returning back to the ship, when one of the Zodiacs hit a piece of ice and the engine failed. This Zodiac was soon encircled with ice and the other Zodiacs were unable to pull him out. Finally, the ship managed to break a clear channel for the Zodiac to escape into clear water. In total the Zodiac was stuck for a period of 75 minutes, but fortunately there were no injuries or hypothermia and the operation ended safely.

A common factor in both these cases was that it was a blue-sky day with no wind, but deceptive tidal currents. With both situations, the ELs were highly experienced and dealt with the problems calmly. Thus, other than delays, there were no real issues.

Incidents will always happen. The trick is to ensure that firstly, those involved have the right skill sets to deal with what is happening and secondly, that lessons are learned.  Each incident provides useful reminders and opportunities for field staff to become more experienced and learn from the episode.

Feedback from the EL on the Brown Bluff incident noted that changes in wind speed, current and tides all played a role in being caught by the ice. For example, these experiences highlight the usefulness of having one or more people responsible for watching the movement of ice, and good coordination with the bridge. Get the bridge to give regular updates, without necessarily being asked, as they have a higher vantage point to those on the landing site. It is always a good idea during Zodiac cruises to buddy up by using two boats, with each always watching out for the other.

Be hyper-vigilant in ice and, of course, when doing Zodiac cruises around icebergs, please ensure that you don’t go over the foot of the iceberg; remain far enough away from the iceberg so that if it should roll or a bit breaks off that you and your guests are not injured by falling ice. Pleneau this season has had very tightly packed icebergs, so it is an area to be super careful when cruising around the bergs. It is worthwhile to refresh your memory on the guidelines for small boat operations in the vicinity of ice."

I think the above reinforces not just the wild nature of Antarctica, but also the amazing levels of skill and training which Antarctic teams undergo in order to ensure that visitors are kept safe. These people are more than your average tour guides!