Here, not there: coaxing my mind out of the mountains 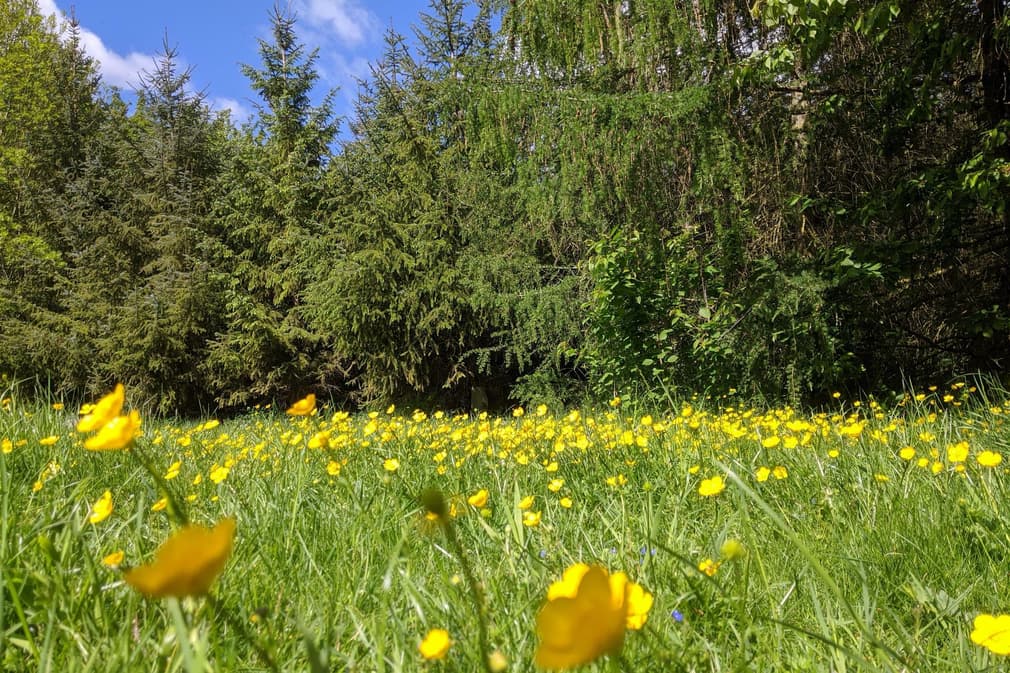 I should be in the mountains. Right now, as I write this, I should be in a Spanish spring meadow, looking up to great peaks and down a sweeping green valley. But instead, there’s the metal gates to a locked up college out one window, an empty train station out the other, a grey concrete driveway out a third. I know how lucky I am. All the people I care about are safe and gratitude has never come more easily. But as any traveller will know, it’s hard to stop my mind wandering out the door and into those mountains whenever it gets a quiet moment.

But it’s not all bad. Just beyond the college is a meadow of our own. It doesn’t come with a valley, but it is getting overgrown with spring flowers because the cows aren’t there to eat all the grass this year. Beyond that is a nature reserve, a little haven of wild nature, behind a gate that’s rarely opened. The Picos aren’t going anywhere, I’ll go when I can. In the meantime, I can put on my boots and go for a walk. I can bring my mind down off that mountain and into the present, into Hertfordshire, into April 2020. Then write daft poems that try to make sense of this madness. I hope this one comes close.

It’s about wanting to go “over there, way up there” to some exotic new place, but being instead forced (reluctantly) to explore what’s under your nose. Maybe it's only when we haven’t paid big money for it or invested great hopes and expectations in it that we can really appreciate nature's worth. When it's not there to pose for photos. I don’t know what mental image it brings to mind, maybe something akin to James and The Snowman soaring over some magical snowless landscape where the city collides with lagoons and rainforest (Rio de Janeiro, perhaps?). Perhaps with a big wise owl instead of The Snowman and without that haunting Aled Jones song that I detest. I don’t know. Maybe the mental image is someone going a bit mad in lockdown.

Drop me there, over there!

Where the waterfall roars

Well I can’t you see, that’s not government policy
But here’s a babbling brook
That I think is worth a look
Why don’t you go and explore?

Drop me there, way up there!

Where that great condor flies

I can’t I’m afraid, many new rules have been made
So instead here’s a kite
That’s quite majestic in flight
Why don’t you go and explore?

Drop me there, way down there!
In those rainforest trees
It looks dark and green and I want to go see

I can’t as you’ll know, the government said so
But here’s a woodland instead
Through which a walking trail threads
So why not go and explore?

Take me there, over there!
Where the drumming band sings
It is loud and it’s colourful and I want to join in

You can’t join in, that’s not social distancing
But come listen to this woodpecker
It’ll make you feel much better
Oh why don’t you want to explore?

Over there, over there!
Show me that mountain lagoon
It glistens and it shimmers and I want to go soon

I can’t, don’t you know, the border’s still closed
But over here is a stream
That is not all that it seems
Oh why don’t you go and explore?

Let’s go there, over there!
Where the skyscrapers rise
I want to get close and appreciate their size

Not a chance, don’t you see the streets are empty?
But these trees are the same
Skyscrapers in all but name
So why not go down and explore?

Not here, not there
We can’t go anywhere
I don’t like it and it doesn’t seem fair

Not here, not there
You needn’t go anywhere
All the things that you see
Look so different to me
That’s why you can go and explore

If not a waterfall
If not a drumming band
What is it you see that I can’t?

It’s not drummers I see
But a woodpecker, in a tree
It’s he who makes that great chant
And that great waterfall
That you say is so tall
Is just a few inches to me

So the mountain lagoon
Is just a glistening steam?
The condor was just part of a dream?

So do waterfalls
Still exist at all?
Are forests still dark and green?
And what of the open plains
And the ancient remains
Are they real if they cannot be seen?

They’ll be here, they’ll be there
I’ll show you one day
But until then there’s no need to despair
Everything that you seek
Is right here at your feet
It’s all just a matter of where

In the woodlands, right?
Where the woodpecker takes flight
And the streams glisten in the hot sun?

Thank you for reading.

Farewell to a friend: a life in walking boots