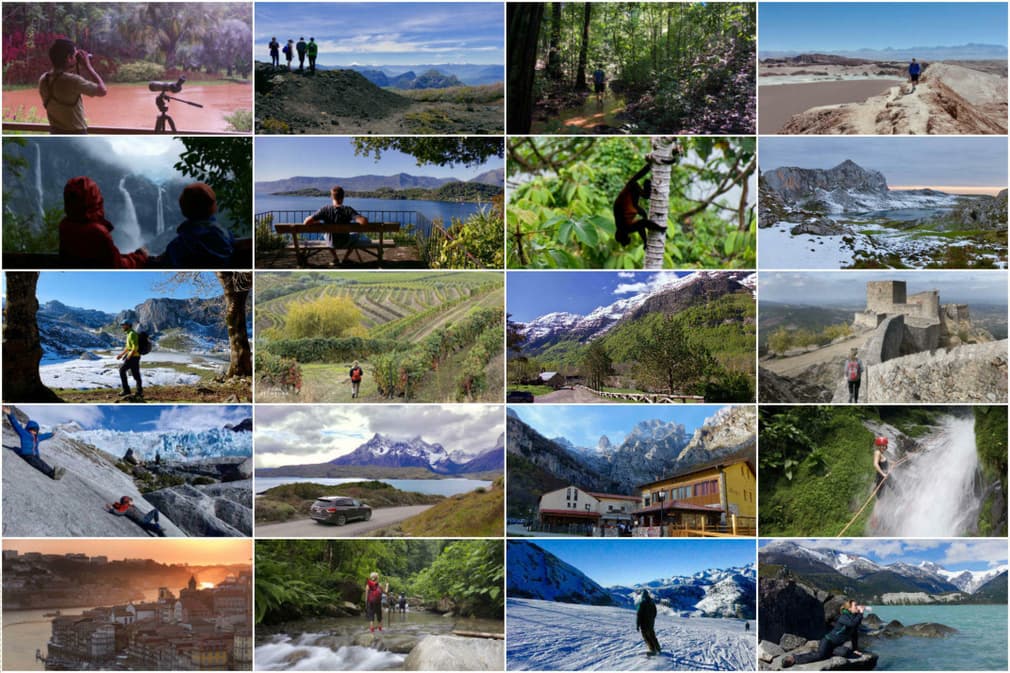 As we always like to do at the end of the year, here we share our best images from the trips the Pura Aventura team has taken this year. Enjoy the journey!

David kicked off the Pura team’s travels in January with a quick trip to Cerler, our favourite skiing resort in the Spanish Pyrenees. Spending his time on uncrowded pistes and in cosy stonework restaurants, he was delighted by how relaxed this charming Pyrenean village is.

Later on in March, Diego went to northern Spain to develop a trip along the Camino del Norte for a US environmental organisation he would be leading later in the year.

Around the same time Taís visited Andalucia to get to know our Andalucia Inn to Inn trip firsthand, walking through white-washed villages, chestnut forests and ibérico pigs roaming free amongst cork oaks around the lovely Sierra de Aracena.

In April, circumstances conspired to make Thomas take his family on a 3-week expedition to the great outdoors of Patagonia. Driving 1,000km along the famed and little-visited Chile’s Southern Highway, he discovered just how anodyne we, as parents, can be tempted to make our family holidays.

The following month, Natasha returned to Spain, immersing herself into the natural and historic beauty of the high Pyrenees in order to evaluate our Pyrenees Inn to Inn trip walking notes.

Also in May, David travelled to Costa Rica’s south, from the Caribbean to the Pacific, to experience a bucket load of great activities. Dolphin watching, rappelling down waterfalls, spotting sloths, ziplining, and kayaking past crocodiles were among the highlights.

In June, we hosted an evening dedicated to the wildlife, landscapes and people of Patagonia at the Royal Geographical Society in London. We were especially honoured to be joined by representatives from both the Chilean and Argentine embassies, including the Chilean ambassador. And in spite of some pretty atrocious weather and nightmare transport logistics in the capital, it was a great success as we welcomed several hundred people.

In August, Diego went to Portugal setting up a new route we’ll soon introduce to you. The itinerary took him from the fascinating cities of the North to the historical towns in the centre and finally to the glorious wine country of Alentejo in the South.

It’s never too late to accept a place on a trip out to Chile, and that’s what David did in September when asked at the last minute if he fancied a nose around the wine region south of Santiago. What a trooper… Besides the excellent food and wine he expected to taste, an unexpected highlight was visiting the Museo de Colchagua.

In October, Sarah took what is one of many people's dream trips, travelling from the Atacama Desert to Patagonia, crossing the Lake District and Chiloé's colourful archipelago in one go. Hard to believe it was 13 years since her first visit to Patagonia! Being a little scared that it would have changed beyond recognition, in the event she was anything but disappointed.

In November, Thomas travelled to Costa Rica visiting lodges and digging up some new gems along the Pacific Coast. Although he was impressed by most of the places he visited, the highlight of his trip was by far the incredibly wild Osa Peninsula, in the southern corner.

Finally, to end 2016, I took my brother - a French Mountain Leader working in the Alps - to the Picos de Europa National Park in Spain, showing him around so he could witness how amazing this place is. And even for someone used to terrific landscapes he was blown away by the beauty of the Picos…