How to shot macaws on Peruvian Amazon 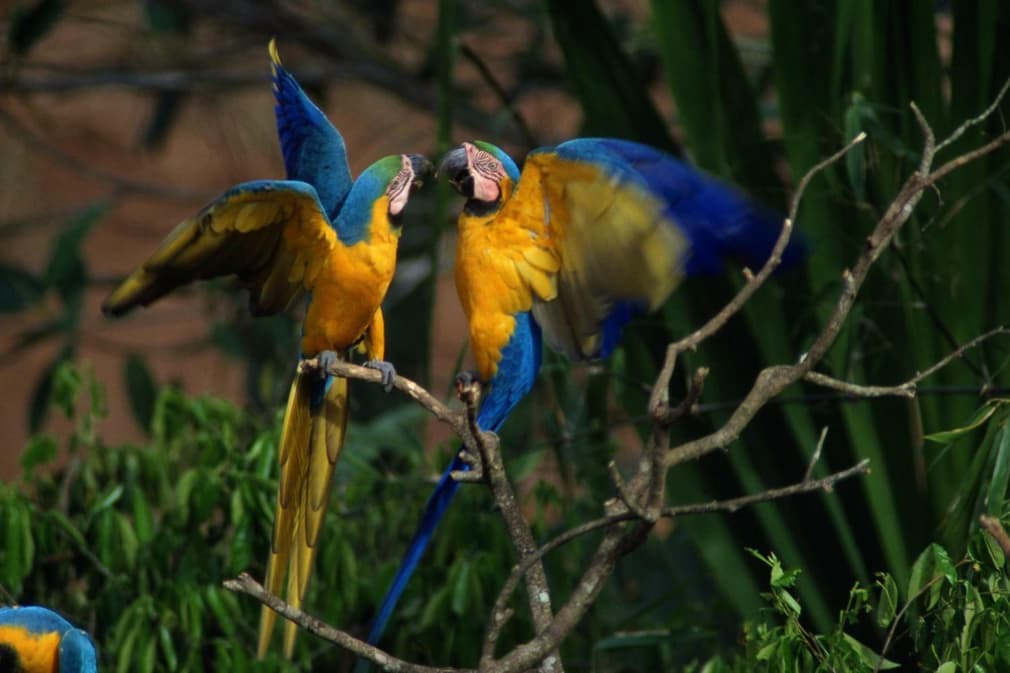 I took this photo at dawn deep in the heart of the Peruvian Amazon, the Tambopata Reserve to be precise. These are imaginatively named blue and yellow macaws on their way for breakfast at the clay lick. Not just any clay lick but what is thought to be the largest parrot/macaw clay lick in the world.

However, as dawn gradually broke, the trees all around us began to fill  with squawking and screeching parrots and macaws. Expectations grew but for a long time no birds would commit to the clay. They don't every day. If it's cloudy they might not come. If there's a hint of any predators, they won't land. You never really know until the first bird makes a break for it. Then all hell breaks loose as the trees disgorge thousands of noisy, colourful visitors onto the cliff. We were lucky. For an hour or more the cliff was ablaze with a mass of flapping birds.

Parrots are amazing creatures, so colourful that it is hard to believe that they are products of nature instead of some cosmetic creation for bird fanciers. The scarlet macaw is the most extraordinary because of the sheer range and vibrancy of colours but oddly enough, they do sort of blend into the Amazonian environment. It's the blue and yellow macaws who stand out the most, that's why I love this photo. It's also not easy to get anything like a decent photo of a bird in full flight with a pretty ordinary camera on full zoom so I was a bit chuffed.

I just know you have two burning questions in your minds:

1) What on earth is the difference between a parrot and a macaw?

Well, I'm sure there are more deep seated and interesting differences between the species but for a means of quick identification, parrots have feathers all over their heads whereas macaw have bald cheeks. There, saved you from that embarassing moment when you don't know whether to enquire after Aunty Deirdre's parrot or macaw.

2) What on earth are either of them doing snacking on clay?

Apparently there are some quite powerful toxins in the nuts and fruit on which the birds generally feed. The clay found on the local riverbanks contains a form af antidote or helps the birds digest the toxins safely. They don't need to eat it every day, they just need to keep themselves nicely topped up.