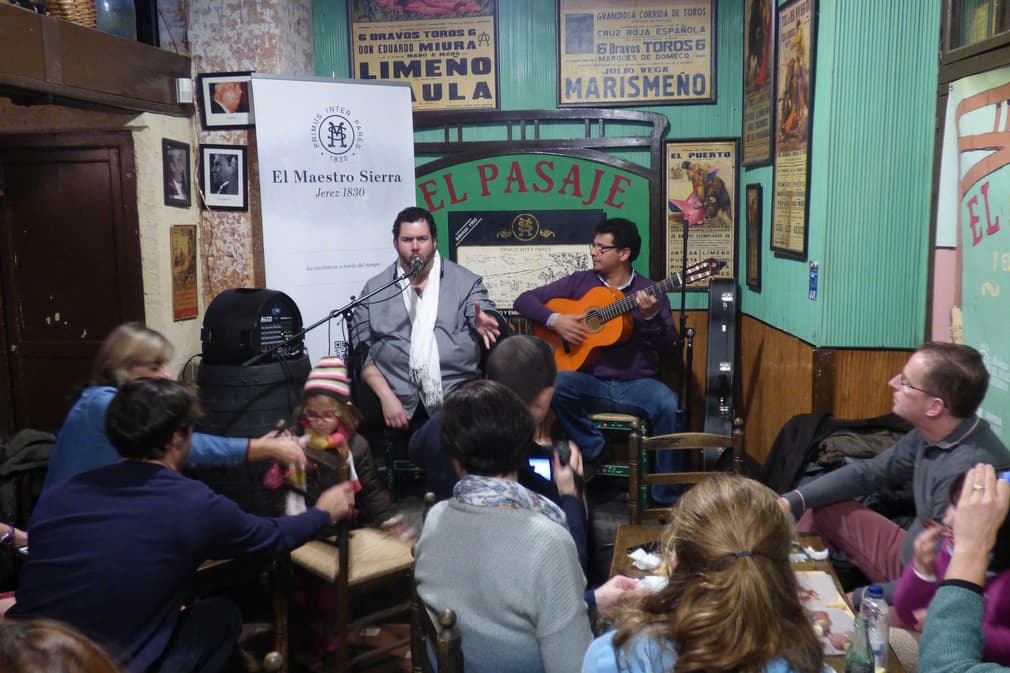 For some, Andalucía's Jerez de la Frontera, is a town of beautiful architecture, fascinating sherry bodegas, and an incomparable equestrian heritage. For music lovers though, Jerez is the pinnacle of the 'golden triangle' or the 'Holy Trinity' of Flamenco music (Cádiz, Jerez, Seville). Olé!

The best time to visit is in February/March when the best Flamenco artists from around the world make their way 'home' to the International Flamenco Festival of Jerez. There are hundreds of concerts, workshops, exhibitions and master classes across the city as well as impromptu performances in the tabancos (bars) of Santiago neighbourhood.

This year special tribute will be paid to Paco de Lucia, one of the most renowned Flamenco guitarists of all times, who passed away last year.

In the video above we hope you'll not only enjoy the baile (dance) but also the other two artistic expressions within Flamenco: cante (song) and toque (musicianship). This was one of the last appearances of the master Paco de Lucia.

My favourite description of Flamenco is as 'the voice of a people oppressed for centuries'. The gypsy people have always been an underclass within southern Spain, ever since they migrated up from Asia, along through North Africa and into Spain. It is supposed that these communities said they had come from Egypt, hence the term gypsy.

The word Flamenco means Flemish in Spanish which would imply some connection with the 16th century Emperor Charles V who came to rule Spain accompanies by his Flemish courtiers. As well as masterful painting techniques, the courtiers brought with them bright red cloth and some fairly arrogant and outlandish behaviour. There is therefore a fairly easy, though perhaps lazy, assumption that this bright, loud and arrogant behaviour looks a bit like the bright, loud and powerful stance of a Flamenco dance.

Personally, I prefer the more academic explanation of Blas Infante back in the 1930s who posited that Flamenco derives from the Hispano-Arabic phrase 'fellah mengu' which translates as 'expelled peasant'.

For me this much more closely reflects the sound and style and emotion of Flamenco. It also explains the unique and beguiling mixture of Arabic and Gypsy so central to the art form.

In the late 1500s when the Moors were being expelled from Spain, or forcibly converted, many took to the hills where they would have joined the recently arrived gypsies. The idea of expelled peasants fits very well with the political situation in 16th century Andalucia.

In fact, the form remained very much underground until the 18th century when it was first 'discovered' and then again in the 19th century when it was adopted as part of mainstream Spanish culture. To this day there is a curious discrepancy between the almost universal appreciation of Flamenco as a fundamental part of the Spanish cultural landscape and the gypsy's continued presence as a an under-class within the society.

But for now, to help you interpret Flamenco, it is divided into three elements, each arguably as important as the other but in truth when put together they are far more than just the sum of their parts:

In case the soul, passion and vigour of Flamenco make you want to discover Andalucia, remember that we are here to help and we'll be very happy to arrange a trip with you. So please feel free to call us on 01273 676 712 or email at info[@]pura-aventura.com.