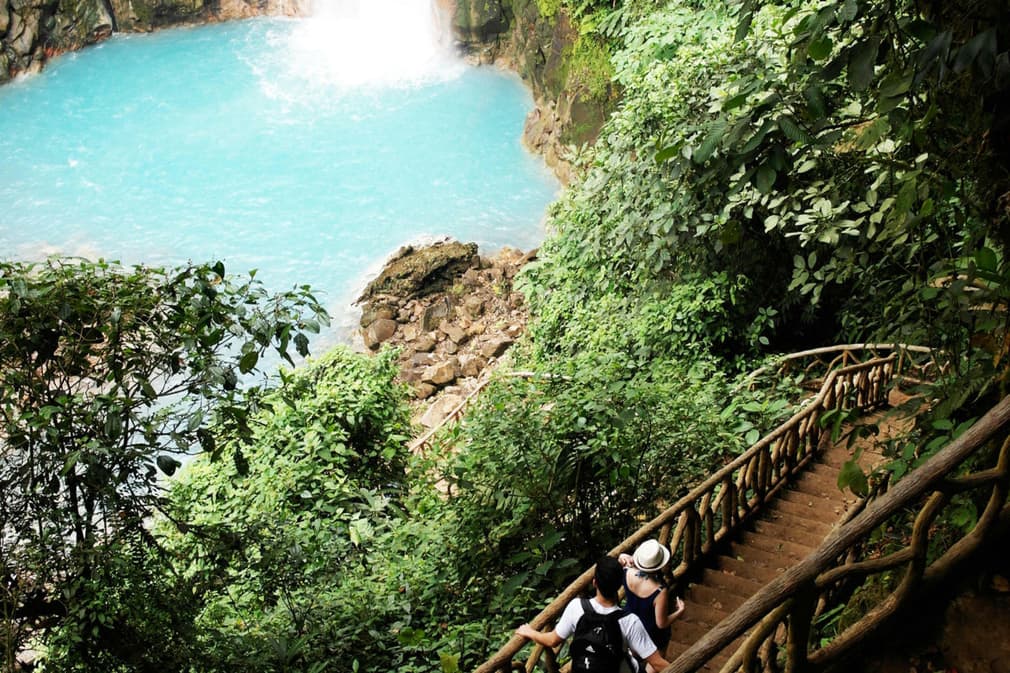 Everyone has heard of the likes of Tortuguero and Arenal, but Costa Rica has an abundance of national parks, wildlife reserves, and protected areas - most of which the majority of visitors never hear about - let alone get to see. For us, the beauty of Costa Rica lies in these unknown corners, heading away from the crowds and the 'Disney-fied' resorts, and so we'd like to share five of our favourite national parks with you here. In no particular order:

Little more than 30km or so (as the quetzal flies) from Arenal, Tenorio Volcano and its surroundings offer a very different experience to the brash steakhouses and bright lights of its more famous neighbour at the far end of Lake Arenal. Miles of primary rainforest, and very few nearby lodges, mean that you can walk in peace through the jungle. The big highlight in the park is the Rio Celeste - the extraordinary blue river which runs through the forest - creating an ethereal flow which encompasses waterfalls and natural pools. Do note though, that you can't go into the water inside the national park. However, it happens to run through the gardens of our favourite hotel, nestled up against the edge of the park, and you're more than welcome to jump in for a dip!

OK, this is probably the one that most people have heard of - though that's not to say many actually get there, given its remote location down in the far south on the Osa Peninsula. Being widely considered the finest wildlife area in a country renowned for wildlife means that the peninsula really is special. Several of the lodges in this part of the world are only accessible by air or water: it is of course, this very isolation that makes it such a haven for quality and quantity of species to spot. While getting to most of the lodges will result in trickier logistics (and relative expense compared to the rest of the country) - few who've been here would say it wasn't worth the effort.

Way up in the far northwest, the landscape surrounding Rincon Volcano is not what many people would imagine when they picture Costa Rica. Although it's forested, this is tropical dry forest, and it's a different world from the rainforests of Tenorio or the cloudforests of San Gerardo: hot (very hot) and dry. Or at least it feels dry: while it often looks scorched and arid, the irony is that it's an area with a lot of water, so there are many rivers and waterfalls dotted around. The region's also somewhere you find smoking fumaroles - Rincon being an active volcano - as well as cowboys, as the park neighbour traditional ranching territory. All in all it's somewhere that makes for a fascinating contrast with other areas that will feature on many visitors' itineraries.

The first marine park created in Latin America is another favourite, down on the lovely southern Pacific coast. This is a great area to spend a few days, in relaxed Dominical or Uvita, with attractive beaches that are generally much quieter than many in the north. Naturally, the great thing here is to get in the water - whether that's exploring the mangroves by kayak, or snorkelling amongst the coral. Boat trips on the water are also a must, with the chance of spotting common and bottle-nosed dolphins, turtles and even humpback whales. From here you also have access by boat to the biological reserve of Isla Caño, for some of the very best snorkelling, and for day trips into the Corcovado National Park to the south.

So while it's not a full national park, we couldn't write this list without mentioning our favourite bit of coast, where we end the majority of our holidays to Costa Rica. The refuge, which comprises a small bit of land, and a large bit of ocean, is hugely important as one of the few spots on the Central American Pacific Coast which sees the mass nesting of Olive Ridley turtles. Known as arribadas, if you're lucky enough to be there when thousands are laying eggs, or the eggs are hatching, you're in for a very special treat. However, the great thing with Ostional is that you can find some turtles throughout the year (we can help plan your trip when numbers will be higher). Plus there are some of our favourite beaches round the corner, and our number one hotel in the country up on the cliff.