From the backroads of Costa Rica
For me, driving is the best way to explore Costa Rica. How else to investigate that little road down to a waterfall, or take an early lunch because you like the look of a restaurant terrace? Or visit a beach 10 miles away because someone has mentioned the water visibility is particularly good today?

Driving connects you to the landscape and the people, in a way you just can’t get behind the window of a bus. And I think that is priceless.

From Cahuita, Costa Rica
I was curious - just how 'Caribbean' is Costa Rica's Caribbean coast? After dining on coconut fish I met a local guide in a Rastafarian hat, who pointed me towards a bar on the edge of the village. It was an open-sided structure, with waves lapping the shore directly in front, and I was soon swaying along to a full instrumental Bob Marley cover, with freestyled lyrics in both English and Spanish.

So, in other words, it's Caribbean enough for me.

From Chirripó, Costa Rica
Blaine is a gentle soul, softly spoken, yet he’s someone with whom it’s very easy indeed to strike an instant connection.

I’ve had plenty of great guides in my travels, many ‘larger than life’ characters with a witty crack or anecdote. But, to me, that kind of style is out of place in the cloudforest. It’s a peaceful place which invites reflection; Blaine is, I think, the perfect companion in this environment.

Having woken up to the rainforest out of the floor-to-ceiling glass and fuelled myself with a huge breakfast, we set off downriver, attacking the water and soaking up the views in the calmer stretches. Exhilarating, remote, beautiful – this was a river I never wanted to end.

From Nicoya Peninsula, Costa Rica
After a day of eyeballing crocs, seeking howler monkeys in the palm trees, and snorkelling in the gulf, how should one end the day? A cooling dip in the pool, with an icy beer in hand, watching the sun come down over the glorious bay - does it get any better than this?

Well, yes, actually - there are some toucans in that palm tree. And is that? – oh yes - a couple of scarlet macaws flying home to roost! As the saying goes, ‘It’s hard work, but…’

From Cahuita, Costa Rica
As I was headed back to the room for my bag, the gardener beckoned me over with a grin and a pointing finger. It took me a moment to spot him, or her, it’s pretty hard to tell – but there he/she was, tucking into the foliage barely 20m above my bungalow roof.

I whipped out my camera, and for one glorious moment those liquid brown eyes looked through the leaves, directly at me. I think it might have been a smile, you know.

From Rio Perdido, Costa Rica
“Seriously? Upside down?” I wasn’t convinced that this was a good idea at all. But the crew had been amazing thus far as we had slid, swung and hiked over and across the canyons of Rio Perdido in Costa Rica's hot Guanacaste region. I decided to trust them. “Just pull your knees up and lean back”.

Up went my knees, back I leant…off I shot, 750m across a forested canyon. Upside down. Laughing like a drain.

From Caribbean beach shacks, up into coffee hills and cloud forest and down to tropical Pacific rainforests, Costa Rica makes for an incredible self-drive journey. By stepping off the tourist trail, you meet more locals, see more wildlife and enjoy more time immersed in beautiful nature.

Created by specialists, tailored to you. 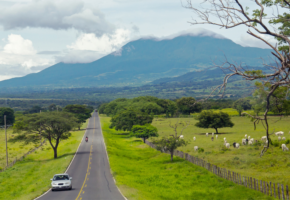 The freedom to explore lends a spirit of discovery to your trip. It lets you detour to a waterfall hidden down a side road, stop at a roadside shack to talk to locals or visit a wild beach your host has just told you all about. 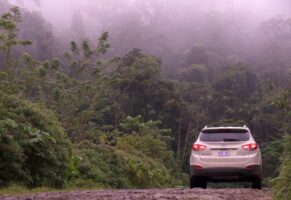 There's no great difficulty driving in Costa Rica - take it steady and it's very safe. You have local support, 4x4 drive in case you need it on bumpier highland roads and GPS technology that makes navigation nice and easy. 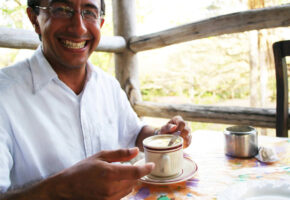 Why You'll Love Our Trips

By taking you to lesser-explored corners, with more freedom and time to watch wildlife, meet locals and soak in the scenery, our award-winning sustainable trips guarantee a deeper connection to Costa Rica.