As Cyprus teeters on the edge, what's the latest from Spain? I was sent a link to this video about the situation in Spain made by the consultancy Grant Thornton. It's certainly refreshing to hear a positive take on Spain's current situation. Reading the news, it is all to easy to think of Spain as being in a state of total collapse, this video goes some way to explaining why that isn't the case. Spain's engineering sector, in particular, is world leading and will undoubtedly be one of the ways in which the country will emerge from the debt crisis.

Tourism too is and will continue to play its part. And it's true, I can't quite reconcile the bad news stories (home repossessions, unemployment, average salaries, etc) with the feeling you get actually being in Spain.

I think you'd expect to go to Spain and see just everyone sleeping out on the street and weeping on street corners (I exaggerate for effect but it's not far off the perception).

The truth is very different of course BUT where is the impact really being felt & seen? The numbers are the numbers so average pay, unemployment, etc are all presumably real.

Is it that you have swathes of the country where the crisis is very very apparent and others where you don't? Is it that the hidden economy is so large that the official figures are somewhat irrelevant because half the population is living off money stored in their mattresses?

Why am I hearing about so many educated young Spaniards leaving the country? Why is Brighton full to the brim with Spaniards?! I know a chef here who advertised for a washer-up at the minimum wage (£6.50 an hour) and had loads of applications from Spaniards including doctors & architects.

Well, here's our good and wise friend Isabel Cortes' take on it and I think it's a refreshingly frank explanation and the first which has reconciled the feeling you get being in Spain with the headlines.

"It's true that it is a very special situation. In truth, in the street you don't notice it so much (Isabel is based in Madrid). The bars and restaurants continue to be full though the majority, including the top end ones, have dropped their prices. There are many, many closed shops and many which have turned into 'outlet shops'.

Of course, there is very little work and Blanca's (her daughter, in her mid-30s) generation, people incredibly well prepared and with spectacular CVs, are unemployed after having had important jobs with responsibility. This explains why there are so many of them overseas accepting rubbish jobs. Here in my building last summer, the doorman's holiday cover was a 42 year old architect!!!

Charitable organisations have seen a tripling in the number of people asking for help. Many families are living off the pensions of their grandparents and if it were not for such strong family ties and A LOT of hidden economy, we would have seen public order breaking down by now.

It's also true that for many people in the upper and upper middle classes, it seems that they haven't really noticed the crisis.

We'll see where this all ends, above all, when.

What's happening is that the Spanish character means that they take calamities somewhat in their stride with a very particular philosophy, in general preferring to carry on living out in the street or in the local bar than being locked away at home.

Let's see if the English start to travel to Spain...."

There's also a degree of good humour to the Spanish, I particularly like this example: 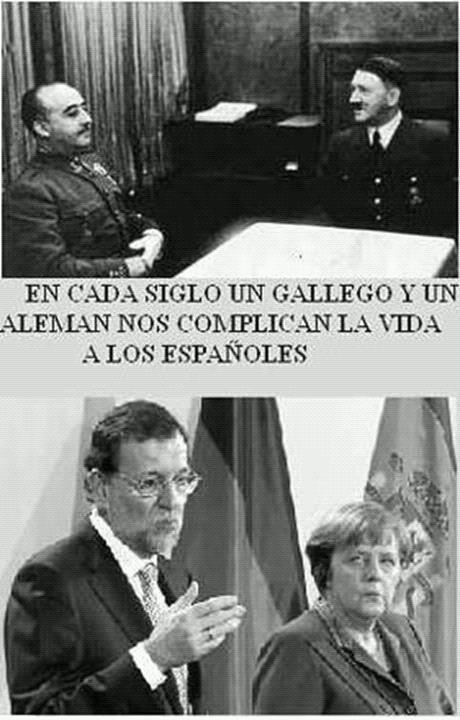 Each century a Gallego (Galician) and a German makes life difficult for Spaniards. We'd better get together to get rid of them again.

(In case you don't know, the top picture is Franco (Galician) with Hitler - the bottom is the current Spanish president Rajoy (also Galician) with German Chancellor Angela Merkel).

If you'd like to travel to Spain, don't forget Pura offer a great range of handmade active holidays to Spain.