What's the difference between Tapas and Pintxos? 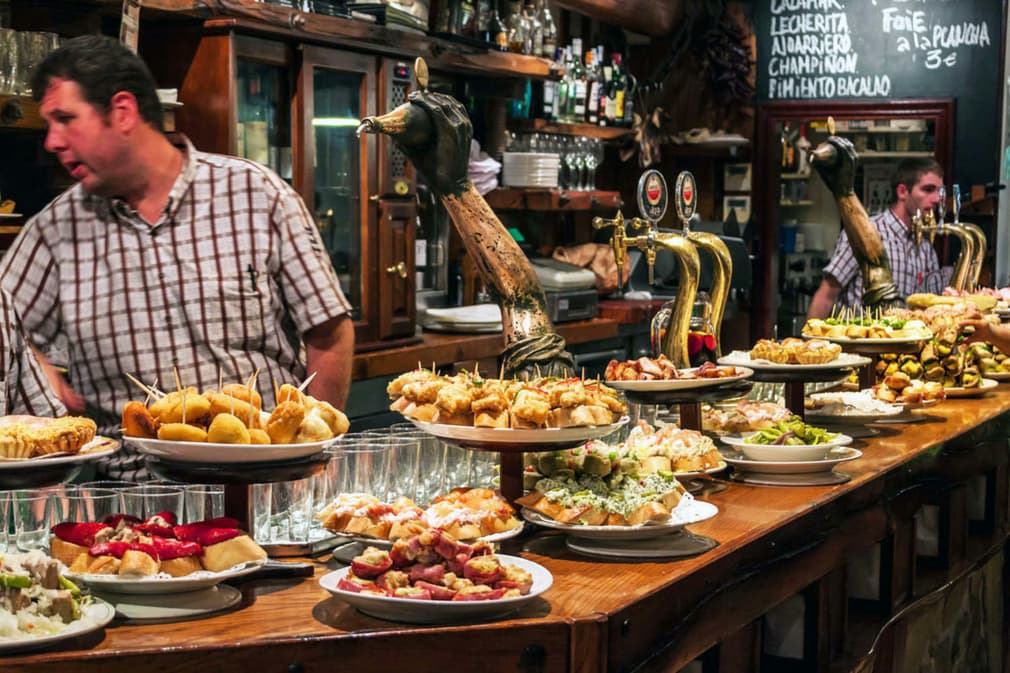 In Spain, you can find Tapas and you can Pintxos. Different words, different foods, same concept. So what's the difference?

Let's start at the beginning with the origin of tapas. Well, there are actually several myths about it. According to one, the tapa was the brainchild of King Alfonso X 'El Sabio' (The Wise). He was ordered to take small amounts of food with wine whilst recovering from illness. Once better, the king decreed that no wine was to be served in any of the inns of Castille unless accompanied by a snack to avoid alcohol intoxication. Tapas became a kind of loophole in the law to allow drinkers to consume alcohol.

Another story says that tapas were slices of bread or meat which drinkers in Andalucían taverns used to cover their glasses (the literal meaning of tapa is 'lid') between sips in order to prevent flies from crawling all over their tasty sherry. This version of the tapa is often attributed to King Alfonso XIII. However, it was also a custom of the day for farmers and workers to cover their drinks with small snacks in order to continue working until the main meal of the day.

Tapas can be practically anything from a chunk of tuna, olives or a piece of Spanish omelette, to hot meat with sauce served in a miniature clay dish. Strictly speaking, it can be any kind of food as long as it comes out of the kitchen of a bar on a small plate (so paella or cheese on toast can be tapas too).

Originally free-of-charge, with mass tourism, the tapas tradition has evolved into an art of its own - but at a cost. Most are now paid for, however simple they may be. Taking the concept in an entirely different direction, famous chefs like Ferrán Adrià have elevated the concept into the upper echelons of Spanish gourmet food.

Because Tascas (tapas bars) are open most of the day, tapas are not really considered as appetizers or canapés, nor as a collection of small dishes eaten as a main course (that's a tabla). Strictly speaking, they are savoury snacks served only to accompany your drink.

Most Spaniards will go de tapeo - the tradition of visiting a few tapas bars to open up the appetite - to converse with friends before they settle into a restaurant later in the evening. In Spain, dinner is usually served between 9 p.m. and midnight. This is a wonderful experience you should try even if you don't speak Spanish. A tapas bar is like a window into the Spanish soul and local gastronomic mentality. They are really meant to be egalitarian places where people of all classes congregate (children are welcome as well).

About the art of the tapeo, Spanish food writer Alicia Rio, said: 'It's like a baroque, sybaritic game, as it pleases the five senses by means of multifarious smells, friendly pats on the back, the sight and beauty of the streets. It induces states of inspiration and delight, it gives rise to witty banter on trivial topics and the interchange of snippets of juicy gossip.'

Traditionally, all regions of Spain have had either tapas or pintxos, except Catalonia, although they do so today because the tapas culture has become so popular everywhere else. Generally speaking, in Navarre, the Basque Country and Cantabria you won't find tapas either but rather pintxos. Many people believe that they are just a tapa with a toothpick through them, but don't say that when in northern Spain!

The reality is that pintxos tend to be more complicated than tapas - far more so in many cases - and involve much more effort in the way of elaboration and ingredients. In the cradles of pintxos, such as San Sebastián, their production has become an art form, with bars competing fiercely amongst themselves for ever more elaborate and delicious creations.

The word Pintxos comes from the Spanish verb 'pinchar', which means 'to pierce' as many were traditionally pierced with a toothpick, to keep whatever the snack is made of from falling off the bread. It is also a smart way for the waiter to keep track of the number of tapas the customer has eaten - in many bars you will see locals simply pop the cleaned toothpicks in their top pocket as a running bar tab.

Pintxos lovers might describe their food as individual snacks made of a combination of multiple ingredients combined together. While tapas are simply smaller servings of a given dish, and perhaps with just a single ingredient, it would be impossible for a traditional pintxo to be prepared as a bigger serving. You can, and do, share tapas. You don't share pintxos.

Otherwise, the art of eating Pintxos - el txikiteo - is pretty much the same concept as tapeo: moving from one bar to another, eating a little, drinking a little, talking a lot. Whether you're out de tapeo or de txiketeo, the main thing is that you have to enjoy the food in the company of others.

While Pintxos can often be creative and experimental, and Tapas more simple, both use ingredients you wouldn't have considered eating at home, so don't be afraid to try something new! This is part of the excitement, you never quite know what's around the corner.

The traditional drink to accompany tapas or pintxos will depend on the region. In the Basque country it might be Txakolí (a young white wine). In Catalunia take Penedés or Cava wine. In northwestern Spain, sip a Ribera de Duero. In Castile, go for a young Valdepeñas or a robust Rioja. In Andalusia wash down your tapas with sherry. In Asturias it will be Sidra (cider) without a doubt. And in Valencia, a 'champú' - a blonde beer with lemonade.