What is Cabrales blue cheese?

Far from flamenco, paella, sherry and bull fighting, Asturias, a lush and misty region in northern Spain, is a treasure trove for artisan cheeses. Often called 'the land of cheeses' its most famous is Cabrales, a true blue classic made from raw cow, goat and sheep milk.

Recognised worldwide for its strong, penetrating aroma and sharp salty taste, Cabrales has been protected by a Denomination of Origin since 1981. It is produced only in the village of Cabrales and two other hamlets near the northern spur of the rugged Picos de Europa National Park.

Cabrales blue cheese is aged in the natural mountain caves near the Cantabrian Sea for between two and four months. The chilly (between 8º and 12º) and humid (90%) conditions in the caves facilitate the growth of bluish-green penicillium mould in this precious cheese.

Because Cabrales is not compressed, the blue penetrates easily through the entire cheese naturally. Unlike Roquefort, it is not artificially injected with penicillium.

There are only limited quantities available because the cheese makers use traditional farmhouse methods, in small family-run dairies. If you wander into the village of Cabrales then you can easily find the houses of the producers and wander in to buy their wares.

If you walk up into the pastures above the villages, you will find hidden cave entrances with makeshift doors where the cheeses are aged. This is genuinely small-scale artisan production. 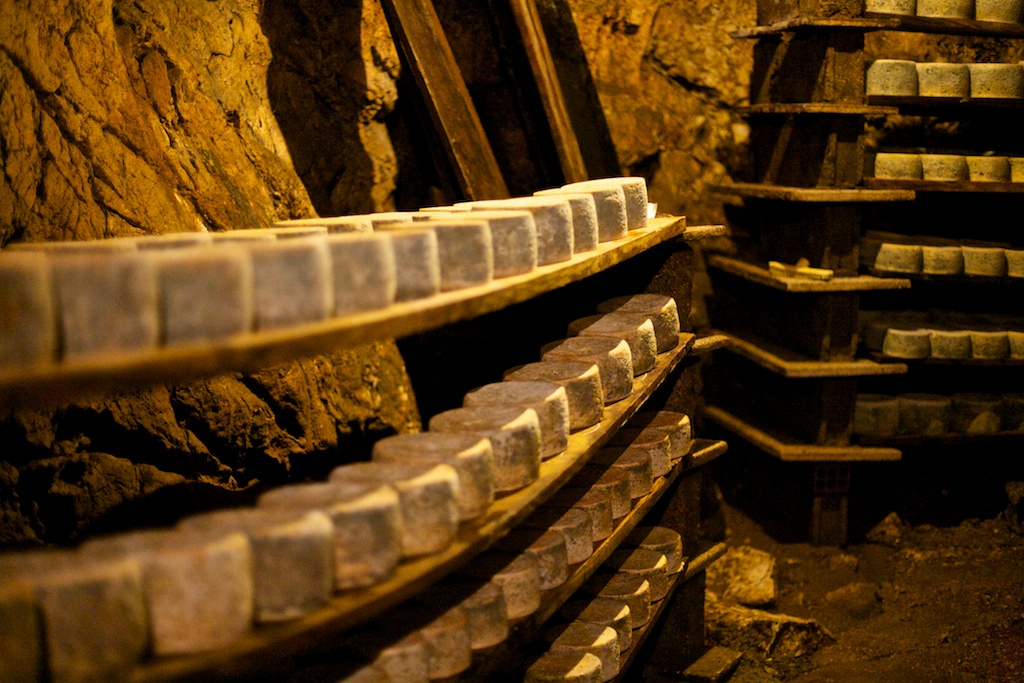 Despite producing the best cheese in the world, Spain's reputation in the field still lags behind the heavily marketed French and Italian offerings. This is partly due to Franco's efforts to shed Spain's image as a country of poor farmers. During his dictatorship, he wanted to elevate manufacturing and tourism to become Spain's defining industries. Indeed, production of artisan cheese was outlawed as part of his efforts to modernise Spain's image.

Luckily, the cheese production went underground, quite literally in the case of Cabrales. Our cheese heroes continued to work their magic until Franco died and left them in peace to make their fantastic cheeses without shame.

The green landscape of the ancient Principality of Asturias with its steep mountains and turbulent seas are rich in legends. Cabrales cheese even has its own:

Once upon a time, a shepherd called Gervasio was milking his animals during spring, the sun furrowed the skies and the weather was pleasant: the cold winter was over and the hot whips of the summer not yet here. Gervasio looked up to see a beautiful girl walking across the fields. He felt such a surge of passion that he had could not take it anymore. With great care he stashed his jars of milk in a mountain cave so nobody could take them and chased the young girl who had taken his heart. The young couple went back home leaving the milk jars behind, taking only the cattle with them. Nine months later a little boy was born to the happy couple. Everything was idyllic for the happy couple with their newborn baby at home until a particularly harsh winter left his animals dying with no pastures to graze. With three mouths to feed, poor Gervasio was struggling to survive until one day he remembered the milk which had lain forgotten since the day he found his beloved. Making his way back to the cave, he found his jars of milk now curdled and streaked with blue mould. Beggars not being choosers, he brought it home anyway and ate it. To his great surprise and enormous delight, he found that his cheese had a wonderful flavour. Over time Gervasio perfected the process to finally become a renowned cheesemaker, so becoming the father of Cabrales.

Every year on the last Sunday of August, the village of Arenas de Cabrales holds a festival dedicated to its iconic cheese. Thousands gather to the town to celebrate the local folklore with exquisite cheese tasting, traditional cheese making process show, games, exhibitions, open air dances, parades and a traditional pilgrimage.

Cabrales is not a commercially mass-produced blue cheese. It is genuinely still aged in small caves up in the middle of the high pastures of the Picos de Europa. It is made by the men and women of tiny hamlets like Sotres from milke gathered from these same mountain pastures.

Cabrales is a cheese which ages rapidly once opened. When young, it is very strong but still pairs well with the dryness of Asturian cider or with strongly flavoured cured meats such as a wild boar chorizo (OK, you'll need to come to the Picos de Europa to find it). Crumbled sparingly over a green salad which includes sweet roasted red peppers and it's fabulous.

If you have Cabrales on your cheeseboard, it's always good to have plenty of grapes or pears to moderate the intensity of the flavour. A robust and smoky Oloroso or Pedro Ximenez sherry goes very well with this (in the UK Sainsburys supermarket have a very passable range of 'Taste the Difference' sherries produced by Lustau).

As Cabrales ages and dries, the flavours become even stronger. Only the bravest of blue-cheese-o-philes will want to challenge it. However, all is not lost for us mere mortals, Cabrales is a treasured base for sauces. With a little taming (i.e. diluting), it is a brilliant sauce to accompany steak.