The story behind Costa Rica's love for colourful oxcarts 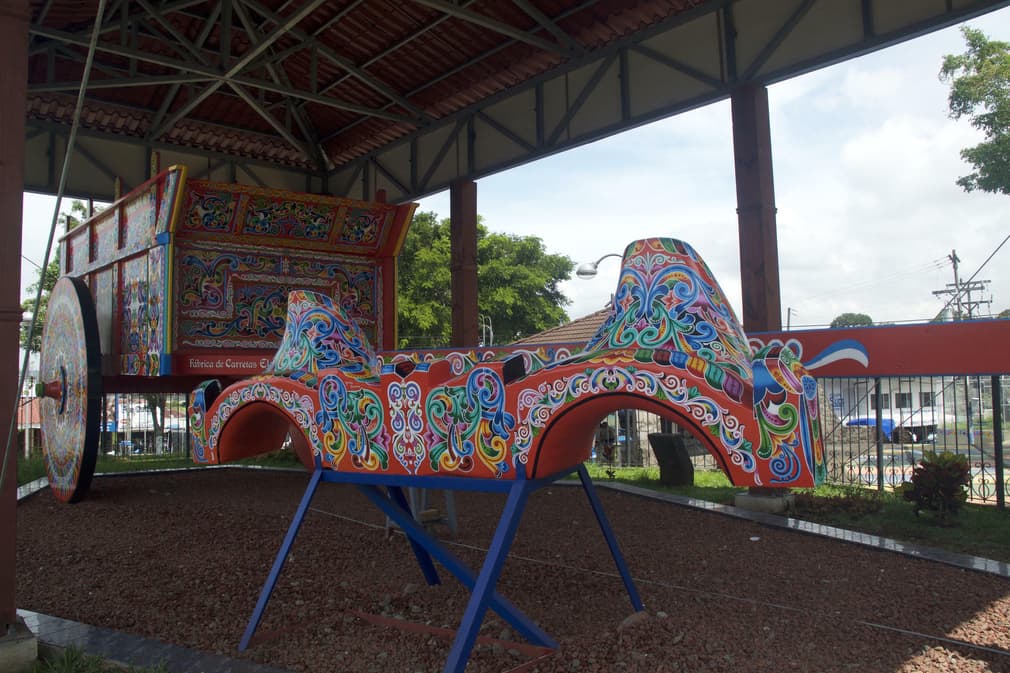 With the coffee trade growing during the nineteenth century in Costa Rica, workers had to find a way to move the coffee from the extensive coffee plantations in the Central Valley to the Pacific Coast, where the coffee would be packaged and shipped to other countries around the world.

This difficult journey that often took up to fifteen days, required a strong vehicle capable of crossing muddy places, beaches, hills, curves, rocky mountains and deep small rivers. So the rustic, wooden carts were created. Although at the very beginning they were pulled by people, as the coffee industry increased, the loads basically became too heavy for the people and they adapted the carts to be pulled by oxen. In many cases, the oxcart was a family's only means of transport, so it was also used for trips, weddings, funerals, and even for medical assistance.

It is interesting to know that before the San Jose-Puntarenas railway was built, many families used the oxcarts to spend summer days in the coast. Spending 4½ days to get there, 2 days in the beach and another 4½ days to return. What a journey!

While oxcarts were also used in other Central American countries, the Costa Rican ones have gained much more esteem because of their unique and beautiful hand-painted decoration.

However, the custom of painting them didn't actually begin until the early twentieth century. Researchers say the need to protect the wood or engaged in their tropical surroundings, started this custom. Initially enabling the identification of the driver's origin through bright colours and geometrical figures indicating from where they came, oxherds progressively added flowers, faces, stars and even miniature landscapes to the design.

In addition to customizing the ox carts with artwork, they also customised their carts to 'sing'. This was accomplished by using a metal ring to create a chime when it struck the wheels as the cart bumped along. Although oxcarts can look similar, like snowflakes, you'll never find two oxcarts painted exactly the same.

As the oxcart became obsolete after World War II due to new inventions (trains, tractors and trucks), some Costa Ricans conserved it as ornamental object, passing their handicrafts knowledge from generation to generation. Nowadays, oxcarts symbolise humility, patience, sacrifice and endurance in an effort to pursue goals in a pacific manner, and are linked to the national progress.

Due to its importance, the oxcart was even designated as the National Labor Symbol in 1988. Today, it is one of the most genuine folkloric symbols, as it represents the simplicity and aspirations of rural Costa Rican people. And so they are typically used in parades and festivals around the country.

Of the many oxcart festivals being held in Costa Rica, the most famous ones take place on the second Sunday of every March in San Antonio de Escazu, for Dia de los Boyeros (Oxcart Drivers Day), and on November 24th in San Jose's Parque la Sabana, date of which it has also been declared Intangible Cultural Heritage by UNESCO in 2005. Besides the parades displaying hundreds of beautifully decorated oxcarts, these two events also offer a good variety of typical food and traditional music.

Another great option is to go to the town of Sarchi, as it is considered to be the birthplace of oxcart handicrafts in Costa Rica, it features the greatest traditional centre for manufacturing and decorating 'carretas' around the country. Oxcart art classes can also be booked with factory artists here.

Today it is still possible to spot colourful oxcarts on the road directed by men in canvas hat and work boots, transporting firewood or hay. They will often be with a small children sitting in the back, helping with the day's labor and learning the technique to control the oxen first hand.

Also, many popular sayings still nod to the tradition of the oxcart. Some of the more common ones are: 'He got on the oxcart' (se monto en la carreta) meaning 'to be drunk.' This actually refers to the custom of the oxcart drivers, after trying to numb the effects of a long journey with alcohol, climbed into the back of the oxcart to sleep off the booze, leaving the oxen, who knew the route, to take them home. This action was penalised by the Police at the time with a one-peso fine, and the official charge on the ticket would read: 'He got on the oxcart'.

Another one is: 'The lighter the oxcart, the noisier it is' (entre menos pesa la carreta, mas suena), it refers to people who talk and talk without saying anything of importance.