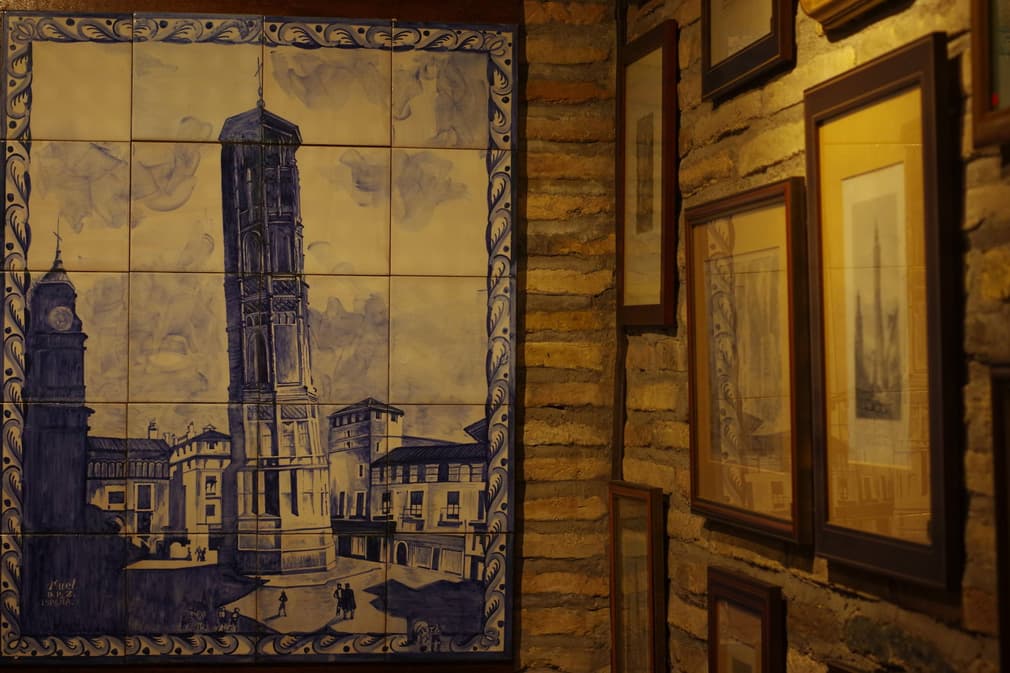 For every Spanish city I've spent time in these past few years, there's a single image that floats to the surface, a ready-made association that gives a sense of place and time and provides a window into my memories. Some are obvious, some obscure. Some are physical, some intangible.

Granada is the city below La Alhambra, Córdoba of hidden patios and Seville of fiery flamenco. Cádiz is fresh sea air, Toledo its sun-drenched plazas and Madrid the autumnal leaves of Parque Retiro. Segovia has its Roman aqueduct, Barcelona its gladiatorial Nou Camp and Girona its riverside houses. Bilbao has more to do with pintxos lining the old town's bars than the gleaming panels of the Guggenheim. San Sebastian is sea and sand.

Zaragoza? That's been harder to pin down. I'm three days removed from my time there and my memories are still obscured by the crowds of people filling the streets during the annual Fiestas del Pilar. And noise. So much noise. The loudest fireworks I've ever heard.

But it shouldn't be this way. There's the medieval Aljafería fortress - the finest example of Mudéjar architecture north of Seville. The towers of the magnificent Basilica shimmer in the murky waters of the Ebro River. A Roman theatre lends yet another layer of history. There's Goya's masterpieces and tapas bars as lively as those in Seville.

Even so, it's a city which I still struggle to place. No quirks to make me smile, no single image which rises above the rest. Nothing quite moved me as I'd hoped it would. Perhaps we'd chosen the wrong weekend to visit, the cacophony of the fiestas too much having spent the previous few days in the peaceful mountains of the Pyrenees. Perhaps it'll come with the passing of time.

Yet, it might not have been this way at all...

The rise and fall of La Torre Nueva

Taking a breather from the festivities, we ducked into the Montal cafe - something of a Zaragoza institution celebrating its centenary in 2019 - in search of coffee and calm. At the back of the cafe is the bodega, a room stacked floor to (a very high) ceiling with wine from across Aragon. A discreet sign, at the top of a flight of stairs leading to darkness, announces, or rather whispers, the presence of the Museo de la Torre Nueva.

Two minutes later the lights were switched on, the door unlocked and we were presented with a sea of drawings, newspaper articles, photos and letters covering just about every inch of the walls. In some, the tower leaned to the left, in others to the right. Sometimes the lean was barely perceptible, sometimes it bordered on the comical. Together, the framed collection told the story of the erstwhile 'Leaning Tower of Zaragoza'.

It's a story of, quite literal, highs and lows. Of a cycle of erection, demolition and resurrection. Of officialdom versus the inteligencia. Of controversy and confusion, of a monument lost to time. 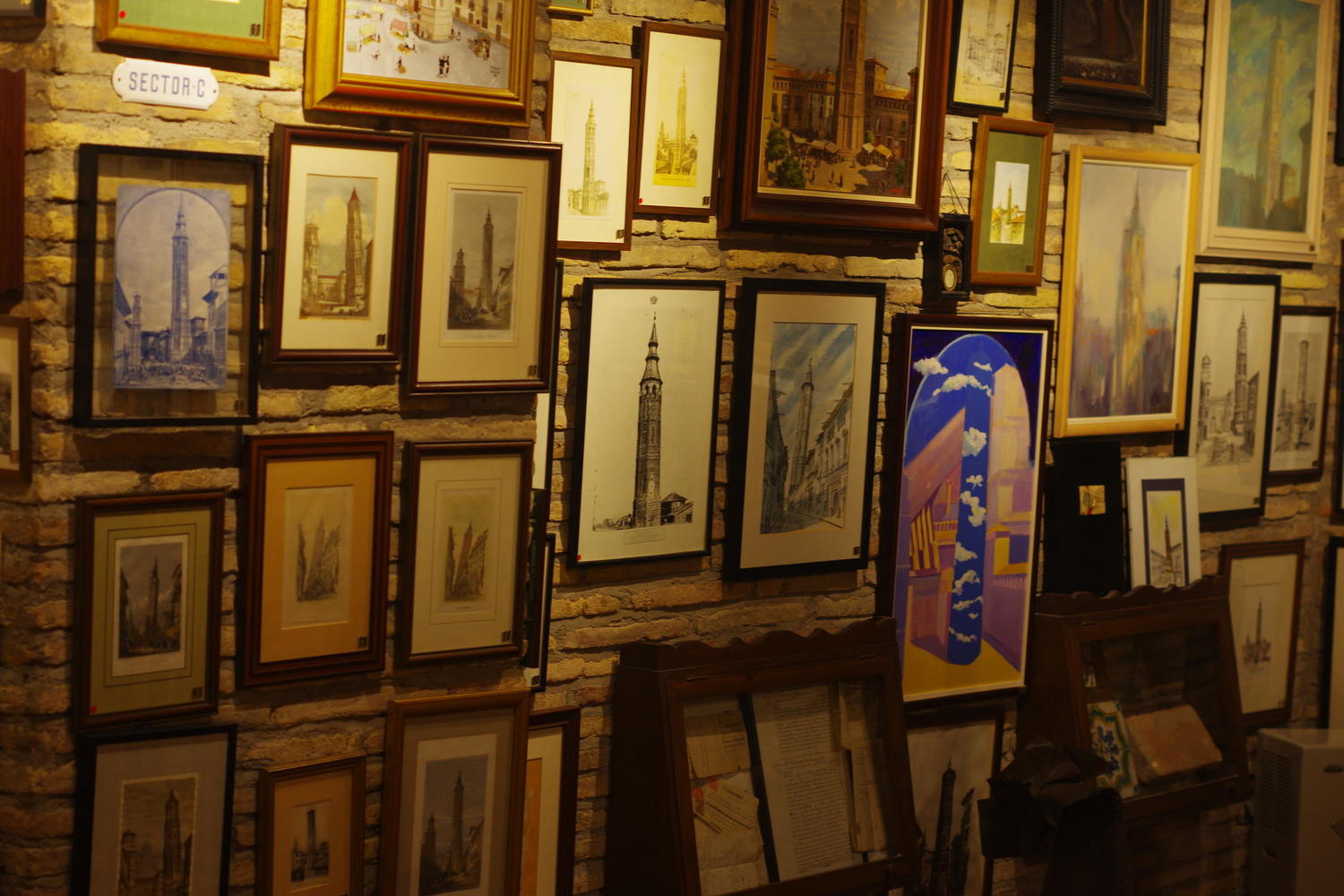 For the start of the story, we have to jump back to 1504 and the time of the Catholic Kings. Ferdinand II, King of Aragon before his marriage to Isabel united the kingdom with that of Castile to lay the foundations for Spain as we now know it, ordered the building of a tower with a clock and a great bell that could be seen and heard throughout the city.

It was to be a project that brought together Christians and Moors, architects and artists, clock makers and brick layers. 15 months later, a great tower rose in the distinctive Aragonese Mudéjar style - a mixture of Catalan Gothic and Moorish architecture - the highest ever of its kind at 84 metres. In 1508, the bells were installed and, nearly two centuries later, the tower was crowned with its spire and wind vine.

Framed poems, yellowing with age, describe the tower as a "Mudéjar monument admired by locals and visitors that brought joy to fiestas and announced the hour of siesta each day". During the War of Independence it served as a watchtower to keep an eye on the movements of French soldiers and came to symbolise "those memorable feats."

But something was awry. A lean became apparent almost immediately, "noticed by all who saw it." Reports speak of a "sinking" of the steps, a rushed construction having left the foundations unbalanced. Talk of its destruction started almost as soon as the cement was dry.

The creditors laid the blame - and the repair bill - at the feet of the local businesses clustered around its base. Of these, was a man described as "influential and well-connected". It was he, this unnamed tailor, who is credited with being the most dissenting of the voices and the leader of a campaign to bring down a tower "whose only crime was to project shade over his shop, obstructing the flow of business".

Despite repeated assurances from the architect that the structure posed no threat, that its lean never exceed 2.67 metres at any point in its history, in 1860 the tower was condemned by "indifferent" local authorities in "one of those capricious moments never understood".

The local inteligencia came together to organise demonstrations against the tower's destruction, a timeworn poster placing one of these in the theatre of Goya, named after one of the city's most famous sons. The tower was lavished with praise, described as "a symbol of the city for nearly four centuries" in one of the more elaborate poems. Another bemoaned how "your clock, mute for the indifference of many, will no longer count the hours. To signal the minutes would be to expect the impossible."

To make matters worse, in order to raise the funds needed for its removal, visitors were charged 10 centimos each to scale the tower and appreciate the views. This very fact alone, the flow of footsteps up and down its stone steps, failed to prove that the idea of it falling over was misjudged. The tower was, in effect, being made to dig its own grave.

In 1892, the tower was lost forever, its stones buried in the foundations of homes across the city. Plans to rebuild it came and went and Plaza San Felipe, indeed Zaragoza itself, was left without its defining feature. 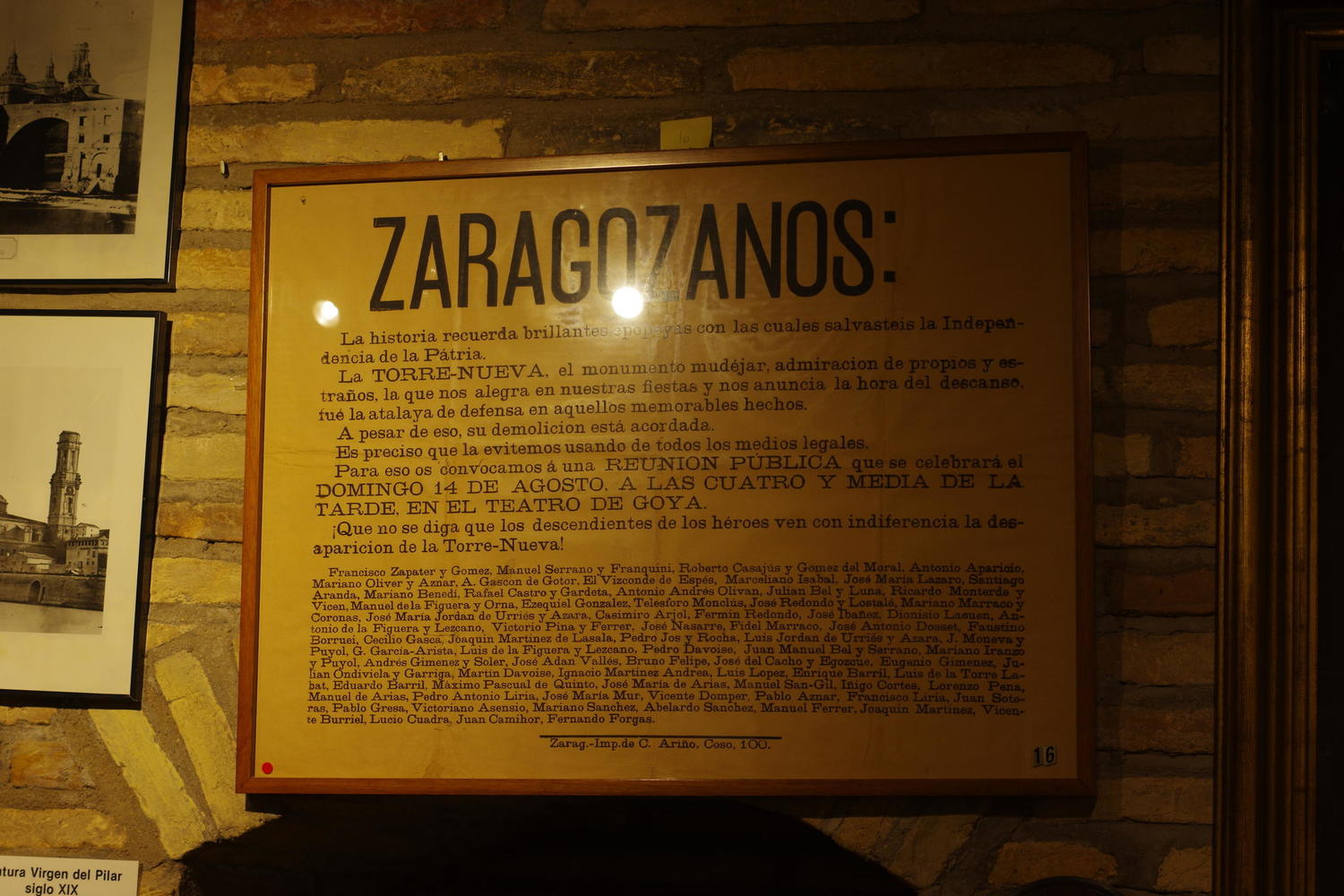 Poster organising demonstrations against the felling of the tower

But remarkably, this curious tale does not end with the tearing down of the tower. History was about to repeat itself.

In 1991 a monument to the tower was built in Plaza San Felipe. "Neither the President nor the Parliament of Spain could bring down this monument" claimed the Mayor of Zaragoza, Antonio Gonzalez Triviño. Just 11 years later, following a ruling from the Arogense Supreme Court, the demolition of the monument began in earnest. For the second time, Plaza San Felipe was stripped of its symbol, this time at a cost of €36,000. Another has been mooted, so the show might yet have a third act. 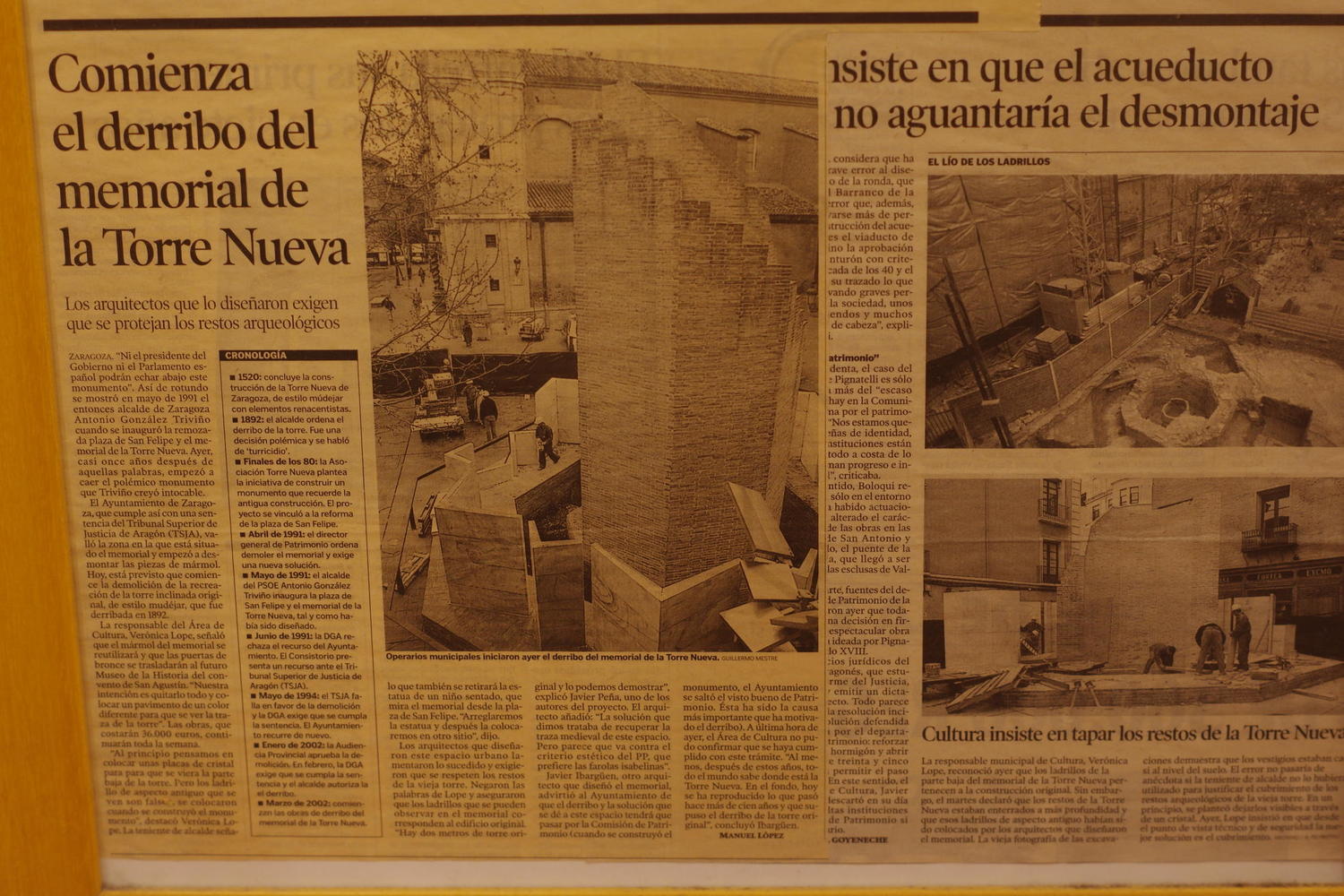 Newspaper reports detailing the removal of the monument in 2002

What a difference a building makes

Among the thousands cramming into the streets of Zaragoza over the course of last weekend, I can't remember seeing many who resembled a tourist. There was a father and daughter from Mexico City ahead of us in the queue to the Aljafería. But there was little in the way of Instagramming going on - I think I saw one selfie stick. Great for me and my experience, but not so great for the local tourism industry.

Just imagine though, in this age of social media, of Ryanair, of digital maximalism, if Zaragoza still had its own Leaning Tower to call upon. What if Pisa hadn't cornered the market in oddly inclining monuments? One building it might be, but what would be of Paris had Barcelona not rejected the Eiffel Tower? Would Bilbao welcome even a fraction of its visitors without the Gugenheim effect? Is London quite the same city to the foreign visitor whilst Big Ben's chimes are silenced and its clock face obscured?

But a thought occurs to me. What if I'm looking at this all wrong? Maybe it’s the absence of the tower, this quirky wine cellar-turned-museum that is my defining image of Zaragoza? An obscure city compared with its more illustrious siblings, but with a story to tell like none of those I've encountered on my travels.

The Leaning Tower of Zaragoza lives on, you just need to know where to find it - tucked away in a dark basement and announced by a nondescript sign that hundreds pass by each day without paying it any heed.

That, when I think of Zaragoza, might just be what floats to the surface. And you know what? I think I prefer it that way.