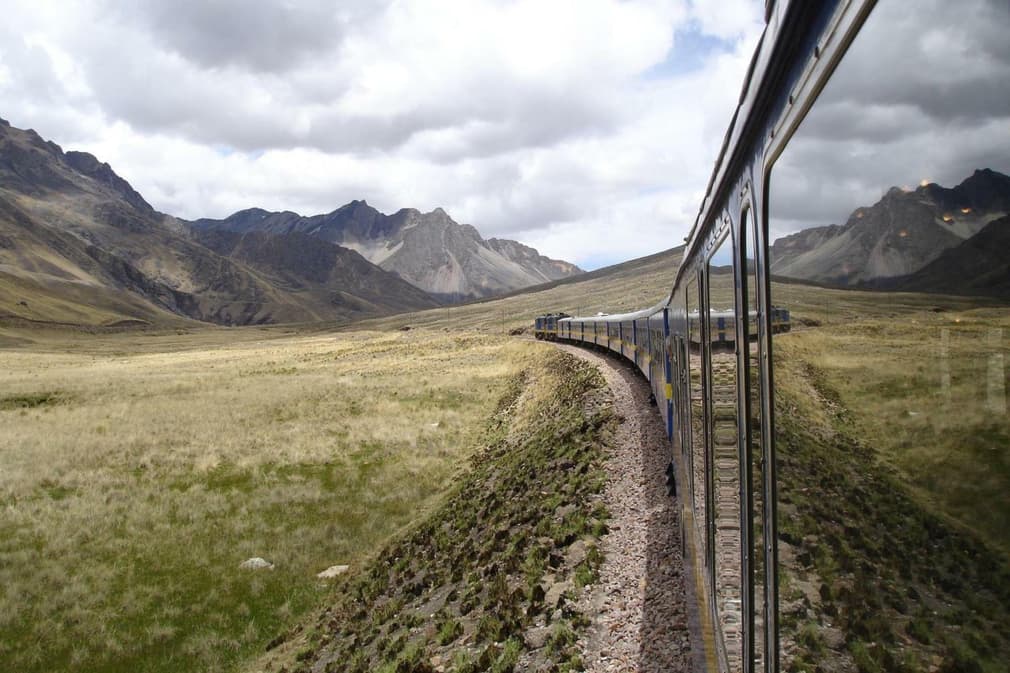 Travelling by rail holds a romantic and old-fashioned appeal that can't be equaled by other means of transport. A rail journey is an expedition through cultures and across lands, providing a memorable experience by taking the time to comprehend the beauty of some of the most spectacular places on the planet. For this reason we wanted to present you our selection of the very best scenic rail journeys in South America ' we hope they inspire you to think of including a train or two in your next adventure.

For many, a trip to Machu Picchu is a once in a lifetime experience. Travelling there on board the Hiram Bingham, following one of the most beautiful rail routes in the world, pretty much guarantees an unforgettable journey. Named after the American explorer who brought Machu Picchu to the attention of the world, this is an exclusive and luxury train that offers day trips from Poroy (20 minutes from Cusco) to the world famous Inca citadel via the dramatic valley of the Urubamba River. The journey can be made either as a day excursion (3hrs 15mins each way), or with an overnight stay. While navigating its way through beautiful Andean scenery, the trip includes appetisers, brunch, live music and a gourmet dinner on board. On-board guides, exclusive to the Hiram Bingham are on-hand throughout the journey to accompany passengers and offer an insight into the story of this amazing place.

The Hiram Bingham runs every day, 9:05am from Poroy and 5:50pm from Cusco, except on Sundays.

The Andean Explorer is not as luxurious as the Hiram Bigham but it is still very comfortable, a slightly toned down Orient Express experience. It is undoubtedly the best way to travel between Cusco and Lake Titicaca. The train follows an amazing route past Inca ruins and snow-capped peaks across rolling grasslands to the vast expanses of Lake Titicaca. This spectacular ten-hour rail journey runs between the beautiful, historic city of Cuzco to the rather more earthy town of Puno, on the shores of Lake Titicaca. The train leaves at 8 a.m. and arrives at 5:30 p.m. in either direction. Lunch and afternoon tea are included, and the bar and open observation car to the rear provides good entertainment.

Of great interest and amusement to many is the train's passage through the utterly chaotic city of Juliaca near Lake Titicaca. You travel literally through the heart of the street market with full sized pool tables set out at the side of the tracks, outdoor barber's chairs and anything and everything imaginable for sale. The vendors scatter off the tracks as the train creeps through, only to regroup as soon as the train moves away.

As this amazing train takes you from the lovely city of Salta at around 1,900m above sea level up, up and up into the clouds, reaching a staggering 4,200 meters. A cloud in Spanish is nube. This is considered by many as one of the most amazing train routes in the world. The 15-hour (!) round trip departs from Salta, passes through the Valle de Lerma, enters the Quebrada del Toro and finally reaches La Puna. The railway line is considered a miracle of (British) engineering with its 19 tunnels, 29 bridges, 13 viaducts, 9 sheds, two spirals and several sewers, some of which are veritable works of art. Along its 217 km journey, the world's 3rd highest railway brushes up against the high peaks of the Cordillera de los Andes, providing some of the most magical landscapes of Northern Argentina. The train is complete with a dining car, sightseeing car, folk music shows, and bilingual guides. There's also a doctor with oxygen!

Most people do just the outbound trip, returning by car from the viaduct at the very top of the route by car ' it's a mere 2 hours back to Salta this way.

The train to the clouds runs from April to November and leaves at 7:00 am, returning to Salta around 10:40 pm. During summer, from December to March, the Tren del Sol travels from Salta to Diego de Almagro station, at an altitude of 3,500 metres.

Please be aware that the train is highly dependent on numbers so it is subject to cancellation at relatively short notice. Leave flexibility in your plans in case you have to go the day before or day after.

Everyone who loves wine and antique steam engines should try this wine-themed train journey. It runs from Chile's capital, Santiago, south into the Colchagua Valley, famously home to some of the country's finest wineries. Along the way, the train passes by vast vineyards, colonial estates and prestigious wineries. Despite leaving early in the morning you start off tasting wines pretty much straight away, helped down with a dose of typical Chilean folk musician. After your two-hour journey to the Santa Cruz station, you can visit one of the many vineyards of the valley such as Lapostolloe, Montes, Casa Silva and MontGras. The whole experience is quite touristy, even formulaic, but it's a great way to taste some of Chile's finest without having to drive!

TerraSur is the fast and modern train service linking Santiago to Chillán, with intermediate stop at 10 stations. It comes into its own in winter time when the wonderful ski resort of Chillan is open for fantastic snow sports ' boarding in particular.  This scenic train journey takes about 4:15 hours, and is sometimes faster than flying! For this reason, it is the only genuine transport link in this list. None of the other routes are used by locals as they go by road or air as it's faster and cheaper.

We're hopeful that this route will expand further south towards Puerto Montt and then spread north through Chile towards La Serena ' it would be a wonderful country to explore by train!

For now though, trains leave from Estación Central in Santiago near the Alameda and heart of downtown. The station is easily accessed by the subway though navigating the subway with luggage can be a challenge, especially during peak hours. And besides, taxis in Santiago are cheap, if a little 'thrilling' at times.

Originally built to connect the Andes with the coast, this train gets its name from a famous wall of rock with 45-degree incline, called the Devil's Nose, which forms part of the train's route. The journey usually starts at Riobamba, a lively town of cobbled streets, market squares and colonial buildings painted in a variety of pastel colors. It then passes through lovely Ecuadorian landscapes of the Avenue of the Volcanoes as it approaches the impressive Devil's Nose. It takes about 6:30 hours to do the route, however most passengers only do the Alausi-Sibambe-Alausi bit (2:30 hours). Previously, it was possible to ride on the roof of the train, but today, the train operating this route is a single carriage train, so it is no longer permitted.

As this trip is one of Ecuador's most famous attractions, it is recommended that passengers wanting to buy tickets purchase them beforehand (the train runs Tuesday to Sunday).

Built in the 1870s, this was one of the earliest rail lines in Brazil. This very scenic 35-minute train ride (13 km) and fun program for families, has been christened 'Smoking Mary.' Running from Tiradentes to São João del Rei, the train travels through one of the oldest areas of gold mining of the State. In the foreground, the rafts on the river have pumps that suck up alluvium from the river bed, from which gold is extracted by modern 'garimpeiros,' heirs to over two centuries old mining tradition. Sitting to the right (from Tiradentes) gets you the best views as the train chugs along the Mortes River and the São José mountain range unfolds in the background.

The service runs only on Friday, Saturday, Sunday and holidays, when trains leave São João at 10am and 3pm, returning from Tiradentes at 1pm and 5pm.

Originally connecting remote Pantanal region with other parts of Brazil, the Pantanal Express travels through the largest continuous wetland in the world. This seven-hour trip through Brazil's history, bio diversity and culture starts in Campo Grande, the capital of Mato Grosso do Sul and passes by the hills and waterfalls of the Maracaju Range. A three-hour stop for lunch and sightseeing at Aquidauana is also on the program. The passenger cars feature large glass windows from which travelers can view the stunning wildlife and birds that live along the way including the bright blue hyacinth macaw the largest flying parrott in the world.

The train runs only a few weekends a year, so booking in advance is necessary.

Train to the End of the World | Ushuaia, Argentina

One of the most emblematic tours in Ushuaia is the The End of the World Train. The southernmost train in the world was created in 1909 to transport prisoners. The small train leaves from the 'End of the World Station,' west of Ushuaia, and take passengers along the Pico Valley, Toro gorge, picturesque Patagonian lakes and rivers to the Macarena Station where you can learn about the indigenous Yamana People (one of the four native tribes that lived in Ushuaia for thousands of years), then stop at a vista point to view waterfalls before continuing into Tierra del Fuego National Park. After the 1:40 hour journey, passengers can then either return by train to the End of the World Station or continue their excursion deeper into the Tierra del Fuego National Park.

This train runs 365 days a year with up to 208 passengers per trip. There are bilingual guides (Spanish/English) on board to tell the story of the 'Convict Train'.

Be warned that this is really very much a tourist train. Often it is filled by larger cruise ships docking in town. It is handy as means of getting to the National Park but perhaps not the most authentic cultural experience you will have!