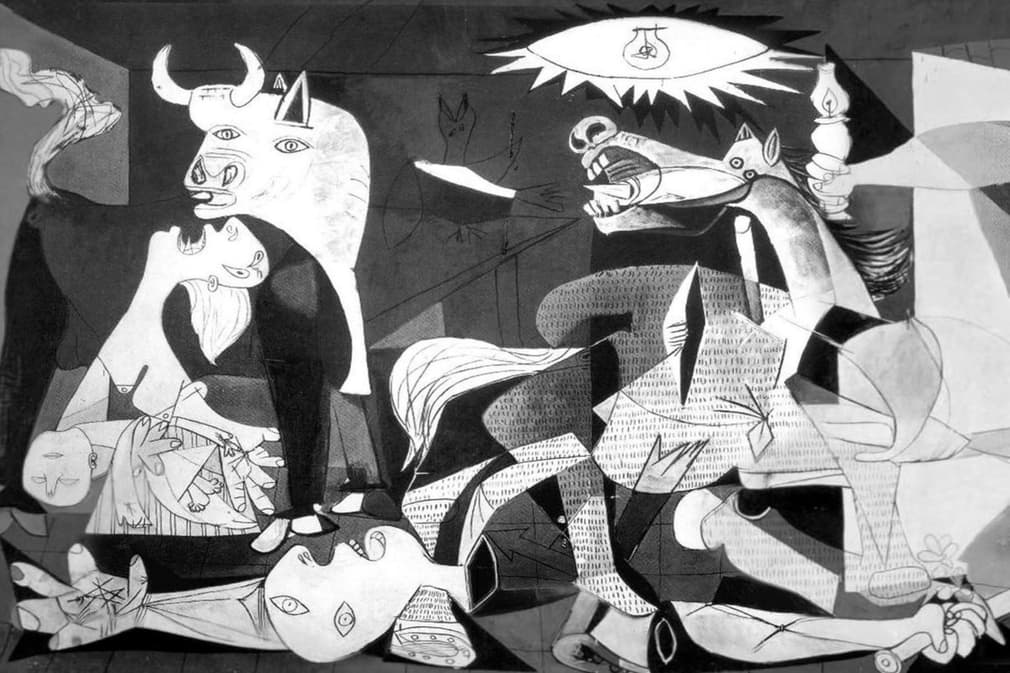 The Spanish Civil War broke out in 1936 and dragged on until 1939 with the final defeat of the Republic by Franco's Nationalists.

The start of the conflict was a sudden and dramatic event with the Spanish army base in Ceuta (tiny North African colonial enclave) crossing the straits of Gibraltar to take effective control of Andalusia. In a country riven by tensions, the Nationalist coup spread quickly. Within a matter of months, the Republic was hemmed into four ‘islands’ of resistance, at the heart of which were: Madrid, Barcelona, Valencia and Bilbao. Madrid was the seat of the elected government so the region was rock solid in its support of the Republic.

Barcelona was home to the anarchist political movement so was ideologically a million miles from the Nationalist cause. The area around Valencia, the critical Mediterranean port city, was solidly socialist, therefore allied to Madrid.

The Basques, the most ancient of European cultures, didn’t really have much time for anyone but threw their lot in with the Republic, when they were promised independence if they helped secure victory for the government. There was therefore a sense that the Basques were the weak link in the chain, the least ideologically committed to the Republic. 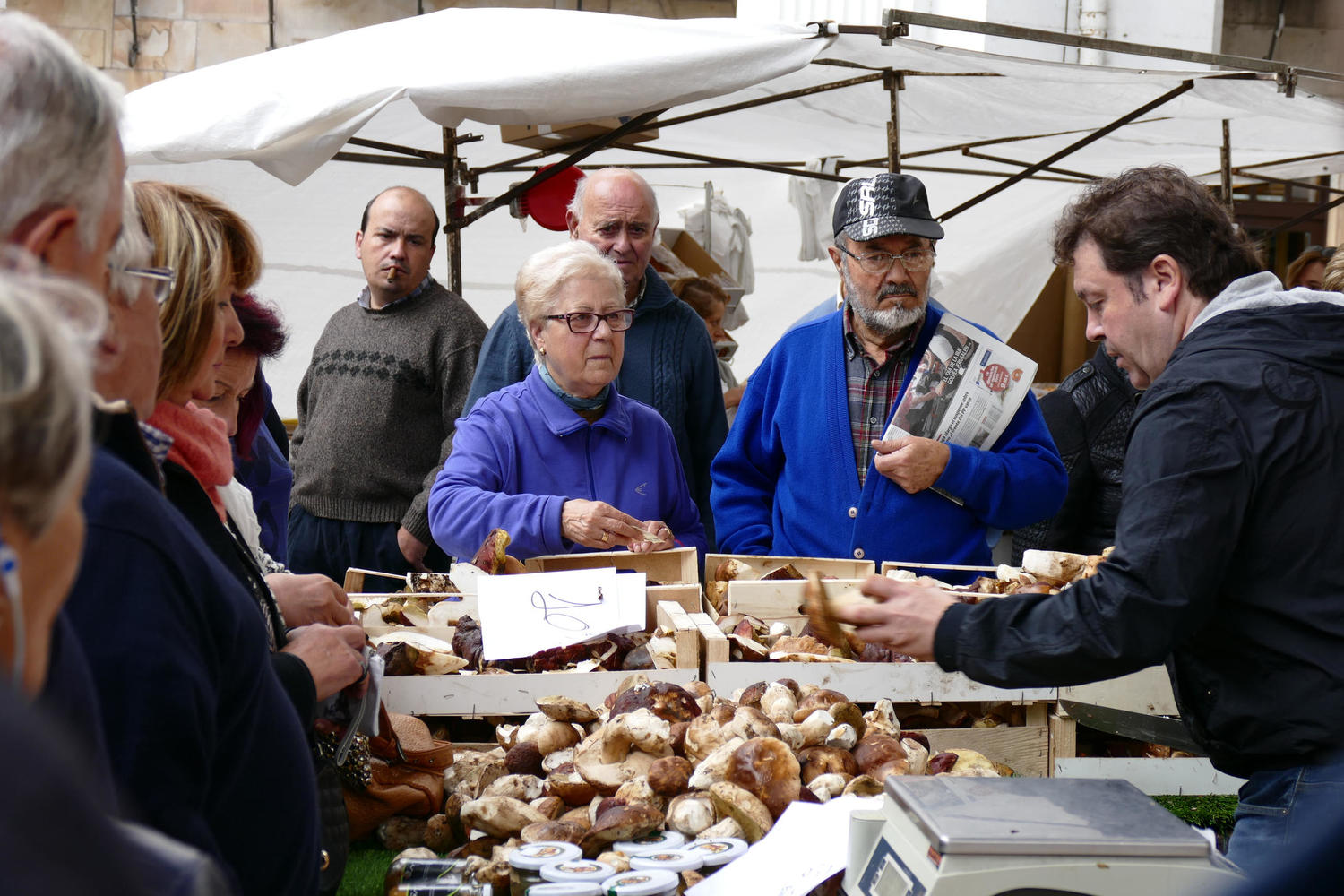 So it was that the Nationalist forces advanced north, pushing around Madrid and continuing towards the north coast, in a full frontal attack on the Basque Country. As the fighting intensified, women and children were sent north, away from the front lines. Many chose to take refuge in Guernica.

Guernica was the spiritual home of the Viscayan branch of the Basque culture. It was in town that their parliament was traditionally based, convening in the shade of the town's great oak tree. The Basque tradition of self-governance had deep roots and those roots were deepest in Guernica.

Then, as now, Mondays were market day. Hundreds of food producers come into the town from the fertile lands around to sell their home-grown and homemade produce. It is no coincidence that the decision was taken to bomb the town on a Monday. The elite Condor legion of the Luftwaffe, embedded with the Nationalist forces for ‘training’, took to the skies on the morning of 26 April, 1937 and headed north to Guernica first to bomb, and then to strafe the town with machine gun fire. By the time they were finished, the heart of the town was reduced to rubble; hundreds were dead or injured.

The first aerial bombardment specifically targeting civilians was over. A new era of warfare had been born. The military theory behind the Blitzkrieg, Dresden, Nagasaki/Hiroshima, Vietnam, Aleppo can all be traced back to Guernica. 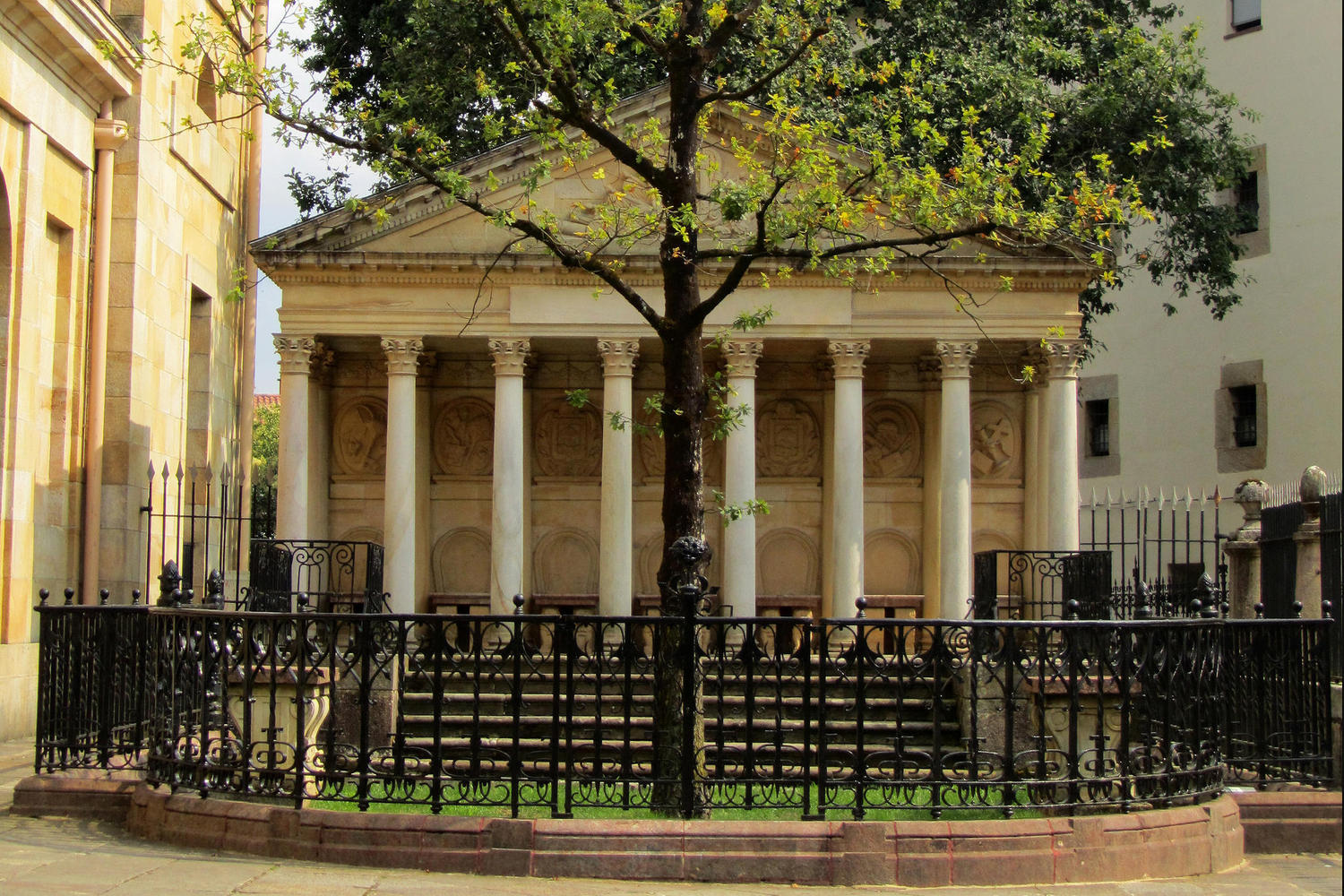 The bombing led more immediately to the surrender of the Basque region, giving the Nationalists access to the vital heavy industrial port of Bilbao. The writing was on the wall for the Republic, it lost the Civil War when it lost the Basques. With all the major political theories of the day represented in the Spanish Civil War, the fault lines of World War II were very much present. It isn’t too much of a stretch to say that “The Second World War started in Guernica.” - Churchill.

It is said that Franco was none too pleased with the bombing. A news blackout was ordered and a cover up implemented. No official recognition of the events of 1937 was given by the Spanish government until after Franco died in 1975.

But of course, news did get out, over the Pyrenees with the International Brigades. The death toll in Guernica was exaggerated to sometimes monstrous proportions. And so it was that a Spanish artist, living in Paris, heard about the bombing. Commissioned to paint a monumental work for the Spanish pavilion at the 1937 Paris World Fair, Picasso had his subject.

Picasso painted and repainted this monumental work many times until he felt he had fully captured the horror of war. In just 6 weeks he had created the most important painting of the 20th Century. 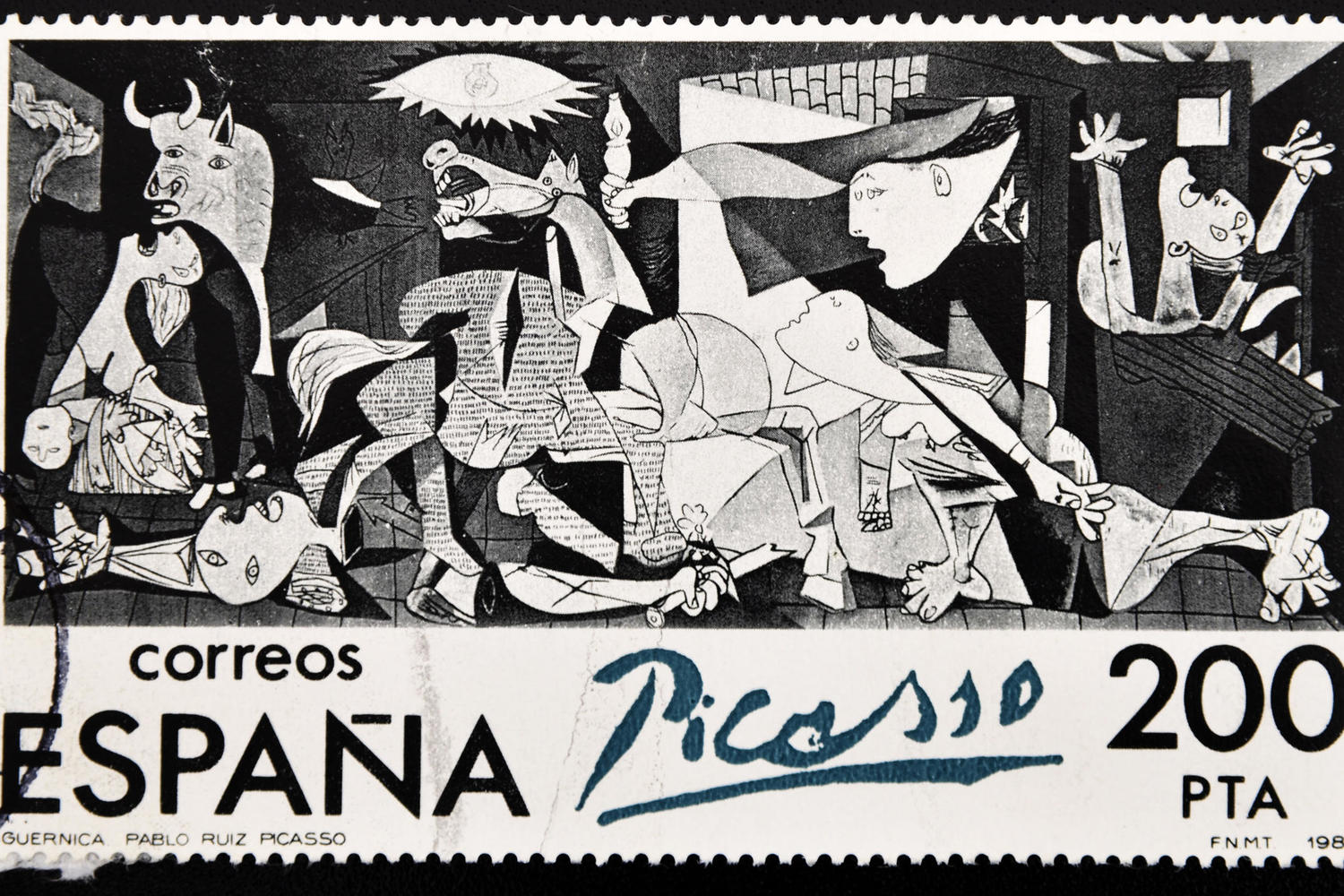 Picasso didn’t want to reduce the painting to a single event, its message was meant to be bigger than that, more eternal. “The horse is a horse, the cow is a cow, the pigeon is a pigeon. People can see in it whatever they want”.

The painting caused a sensation in Paris before going on to tour Europe and America to raise funds for refugees from the Civil War. The work eventually made its way to New York where it stayed. As Picasso said at the time, “Guernica will never hang in Franco’s Spain”, and it didn’t. In 1981 the work was returned to Spain and now has pride of place in Madrid’s Reina Sofia Gallery.

Many of the elements above are common to all conflicts so chime remarkably with images we see week in week out on the news. The painting remains the most powerful and resonant work of the 20th Century. As with any ‘famous’ piece of art, there will lots of people looking at it without really connecting to it. It’s a fairly monochromatic mess when you think about it.

And yet, there are elements which are recognisably reminiscent of the bombing of Guernica.

To the left hand side of the painting you find: 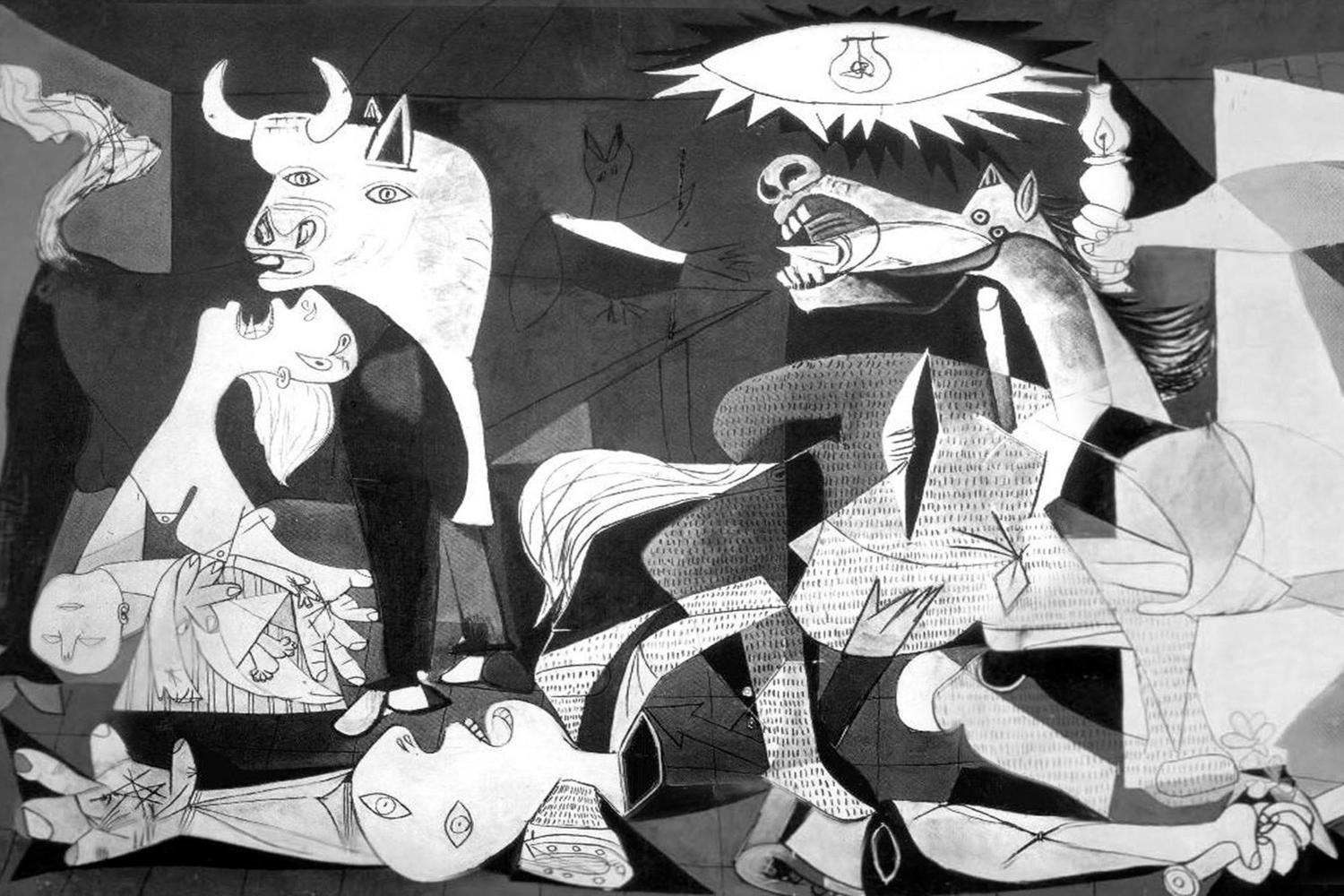 The light. An explosion overhead? The switching on of a light, casting light on an event which had been covered up.

The bull. Classic Spanish symbol of strength and virility, turned on itself. Spain fighting Spain to the death.

The horse. Symbol of the victim. Horses in bullfights would, in those days, be gorged and killed by the bull. The scream of pain of victims. The vertical dashes represent the victims or perhaps newsprint - again reference to the news of events in Spain.

The grieving mother.Perhaps the most powerful single element of the painting. The lifeless body of her baby, the scream escaping and the tear.

To the right hand side of the painting you find: 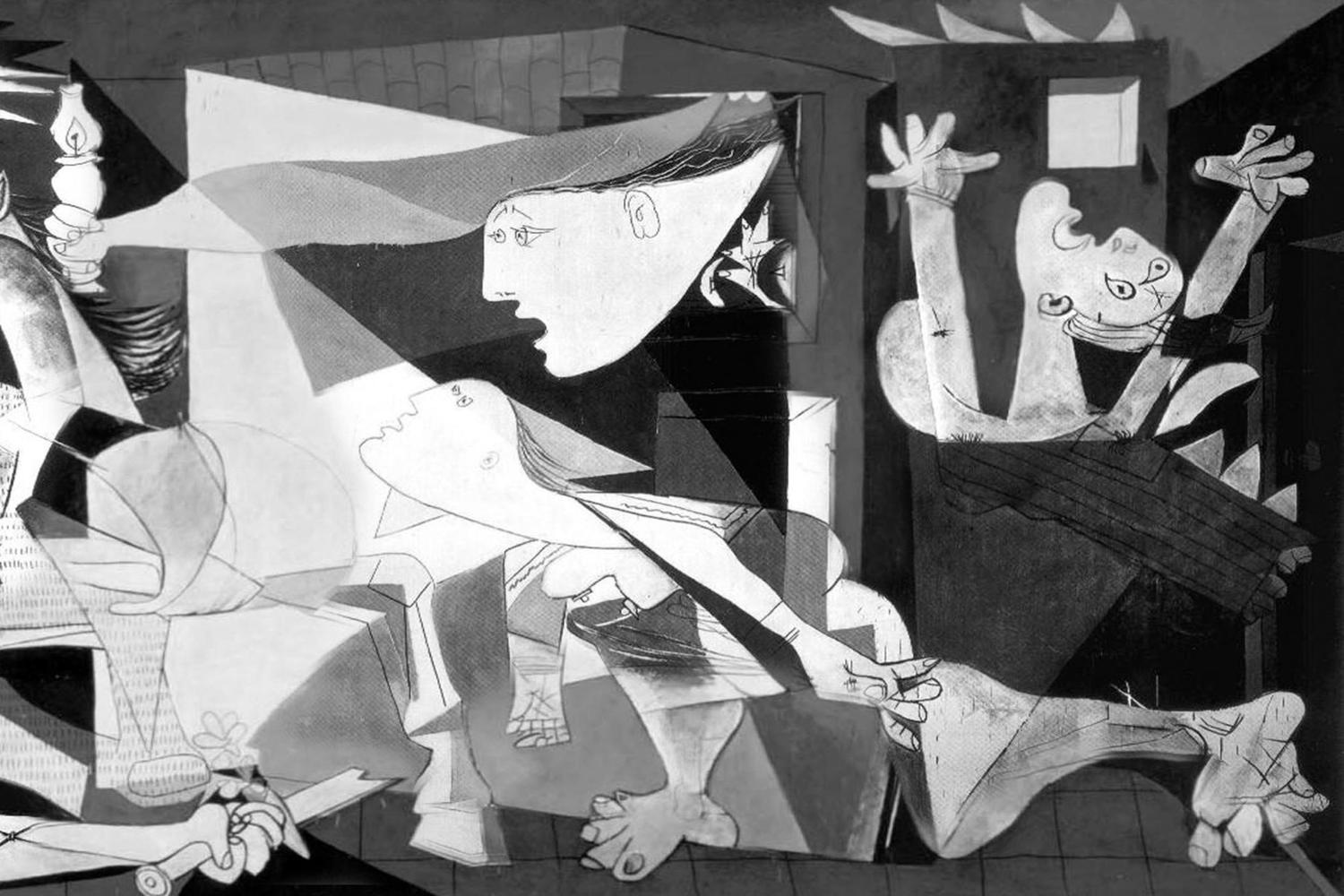 The falling person.The shock and surprise. Remember that Guernica was a place of safety and refuge. Aerial bombing wasn’t even a possibility in people’s minds.

The witness. Swooping in from the window with candle held, the shock of discovery. Look carefully in the window under the neck of this element and you see a hand on chest, an expression of shock. It’s easy to miss this part of the figure but it somehow makes it all the more powerful.

The refugee. Stooped, blank-faced. You have left your home because of war, you go as a refugee to a safe place and then that gets bombed. Where do you go? The confusion, uncertainty and numbness of refugees is most powerfully reflected here.

The sword. Broken, defeated. And yet, the flower grows, hope springs. 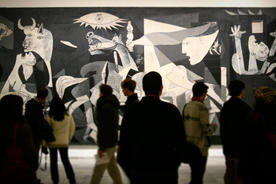 I used to guide in Spain and would go with groups to the Reina Sofia almost weekly to talk about the painting. There would invariably be eavesdroppers listening in to get some insights into what was in front of them. One day I noticed an older lady listening particularly quietly and thoughtfully. She approached me afterwards to say thank you and to tell me a tale… As a young teenager in 1937, a refugee girl came from the Basque region to live with her family in London.

When Picasso’s Guernica came to London’s Whitechapel Gallery the following year, the two of them made a bee line to see it, along with tens of thousands of others. This lady never forgot the emotion of standing in front of the painting, her Basque friend crying for all that she had lost and had always vowed to see it once more before she died. Here she was 62 years later, fulfilling her promise.

If you haven’t seen it, go. Guernica is art at its most important.

What is Dia de la Raza?