Guide to Peru: Food and Drink 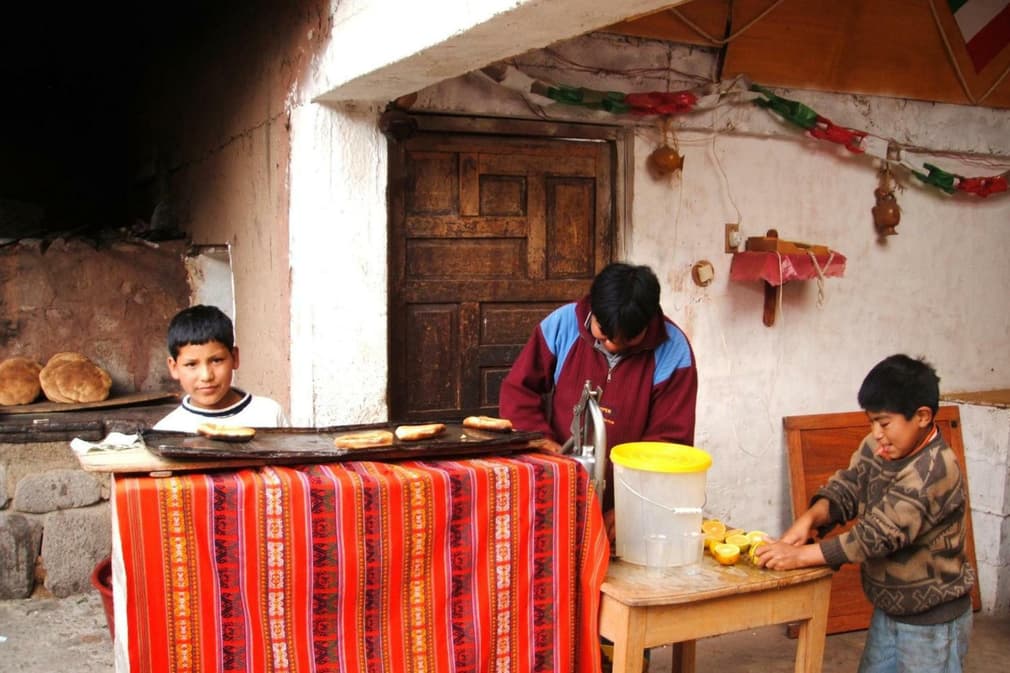 In Peru there are really two types of traditional cuisine: coastal and highland. Coastal food is much lighter and obviously dominated by fish and seafood. Traditional highland food is heartier, dominated by potatoes, corn and quinoa.

The best coastal dishes are seafood based, the most popular being 'ceviche', a dish consisting of white fish marinated in lemon juice, onion and hot peppers.

Versions with Langostinos  (prawns), and camarones  (shrimp), are also popular.

Highland cusine is dominated by meat, corn and potatoes (in any variety conceivable). Papa a la Huanacaina  is a tasty potato based dish made with milk or cheese topped with a spicy sauce. Rocoto Relleno  are hot peppers stuffed with rice, vegetables and meat always goes down well.

Snacks commonly to be seen served on streets are large corn on the cob with cheese choclo con queso , meat or cheese empanadas (carne or queso).

The white highland cheese is an acquired taste! Tamales  are also a popular snack, boiled corn dumplings filled with meat and wrapped in a banana leaf.

Cusco is the best place to try the traditional food of the Incas, cuy  which is roasted guinea pig.

A tastier option is lomo saltado  a kind of stir-fried beef with onions, vinegar, ginger, chilli, tomatoes and fried potato, to be found on almost every menu, as can arroz con pollo , chicken and rice along with  Chicharrones  deep fried chunks of pork ribs and chicken or fish. Nuevo Andino  cuisine consists of local ingredients such as alpaca steak, a delicacy, combined with high quality international dishes found in Cusco's top class restaurants.

Trout or trucha  is a lighter alternative and highly recommended in the highlands.

Drink water only from bottles. This is widely available.

Pisco Sour is the national drink, a brandy based drink mixed with lime, sugar, egg white and cinnamon.

Cusquena and Arequipena are the most common brands of beer in Cusco while the Cristal and Pilsner brands dominate Lima.

Chicha Morada is a sort drink made with purple maize.

The impossibly sweet and fluorescent yellow Inca Cola is the Peruvian version of Coca Cola!

Coffee in liquid form is often brought to the table in a small jug accompanied by a mug of hot water to which you add the coffee essence and milk (leche).

Going against popular belief, food, rather than water, is usually the culprit of intestinal problems. Eating well cooked, piping hot food, is possibly the best way to avoid problems.

Avoid uncooked and under cooked foods. Salads in particular should be avoided until you've developed some local intestinal flora to be able to handle it.

Fruits that must be peeled before being eaten, such as bananas, pineapples, and oranges, are usually a safe bet.

Northern food must be eaten with gusto. The renown of its dishes grows daily thanks to its fresh lime-juice marinaded fish and shell fish served with a hot pepper sauce, onions, yams, corn on the cob, or boiled corn. Chinguirito dried and salted guitarfish is a typical seafood dish, as steamed fish, shrimp, and other shellfish and crab, served with mild creamed yellow peppers.

Fried manioc sticks, parmesan cheese scallops, and banana chips are patient appetizers, or a 'jalea' of fried manioc sticks, fish and shellfish. Causa cold pie, combines layers of mashed potato, and fried onions, garlic, and spices with grilled fish. And to drink, a beer or corn beer called 'chicha' is served in gourds.

in malt beer.'Priests' soup, a turkey broth, and 'shámbar' a soup combining pulses and pork and beef broth are good for dieters, while desserts include quince jellies, and 'king-kong'

, a cake made with egg yolks, and creamed pineapple and milk custard.

In addition to classic restaurants, these delicacies can be enjoyed at local 'chicherías'

literally corn beer bars where food is prepared over a wood fire in earthen pots, or in 'huariques' the neighborhood restaurants of Tumbes and Piura.

Food in the Amazon is full of exotic delicacies. Chonta or palm tree heart salad is a delicious entrée. Meats and plantains are ever present in the main dishes, like grilled banana plantains (tacacho) with deep-fried beef (cecina) served with chopped onions and dried meat, or stuffed bananas, a banana dough stuffed with beef and peanuts.

Lima is known as the gastronomic capital of South America for a culinary legacy that inherited superb pre-Hispanic and colonial cooking traditions and was nurtured by the best Western and Oriental cooking.

Fish and the fruits of the sea are the basic ingredients in 'tiradito', a soft marinaded fish served in a yellow pepper or 'rocoto' chili cream, 'parihuela' fish and shellfish soup. Shellfish and rice are served Peruvian style while Chorrillana fish is served with fried yellow peppers and tomatoes. Scallops Lima-style are baked with grated Parmesan cheese and barnacles are marinaded in a lime sauce and served with onion, tomatoes, red peppers and finely chopped parsley. Mixed 'jalea' combines deep-fried shellfish, octopus and fish, among other delicacies.

Peruvian versions of Chinese dishes include 'chaufa' Cantonese rice, and beef-sautÃ© with onions and tomatoes in a red peppers, tomatoes and soy sauce, which are local favorites. An endless list of desserts is topped by 'suspiros' meringues in a sweet milk custard, and purple corn custard or 'mazamorra morada'. Other favorites include rice milk pudding made with pisco grape brandy, DoÃ±a Pepa nougat that brings together the flavors of sweet baked wheat flour sticks, lard, eggs and anis seed layered with fruit and sugar syrup and finally fried doughnuts or 'picarones' made from yam flour bathed in molasses syrup.

The culinary traditions of Arequipa, the White City, can be best enjoyed in the so-called picanterÃ­as (traditional restaurants with firewood cookers). A good meal starts with hot red peppers stuffed with minced meat, spices, cheese, eggs and milk (rocoto relleno); then the so-called 'soltero' made of broad beans, corn, olives and chopped hot red peppers; and ocopa or sliced potatoes with peanut, onion and cracker cream and, finally, chicharrones or 'deep-fried' pork.Favorite soups are the white broth of lamb loins, potatoes, corn, chickpeas, freeze dried potatoes 'chuÃ±o' and spices, and 'puchero,' a stew of boiled beef, pork and chicken with vegetables and spices. Main dishes are 'adobo', a pork loin stew made with hot peppers, onions and corn beer called chicha, served with bread; also 'picantes,' spicy dishes made of pork or beef, lamb or duck; 'locro' a stew of beef, pork, beans and vegetables; 'chupe,' a shrimp chowder where shrimps are fried in hot red pepper and cooked with broad beans, milk, rice, corn and potatoes; and 'Malaya', parboiled and fried flank steak.

Favorite desserts are fritters made of flour, eggs and milk and bathed in molasses syrup; 'queso helado' cinnamon, coconut and spices ice cream, plus chocolates and toffees.

Heated in a firewood oven, earthenware of the highlands gathers odors and flavors linked to earth. Meats, tubers, grains and herbs are used in a great variety of simple but tasty dishes.

This trend, which appeared in the eighties, uses old Andean culinary traditions adapted to international cuisine preparation and presentation. Recipes are strict and food is very tasty and well presented, with little spices and fat, and lightly cooked.

The freshness of the fish and the seafood is what creates the cebiche. Freshly caught fish and seafood mixed with purple onions, lemon juice, salt, and a touch of chili pepper. Sweet potato and corn accompany the dish. A real luxury that the Peruvian coast brings.

Preparation: First, place the fish in a bowl and season with the garlic, salt, white pepper, aji verde pepper and aji limo pepper. Mix thoroughly in order for the fish to be well seasoned. Next, add the juice of freshly squeezed and strained key limes. Mix for a minute. Before serving, add the onion. Lastly, serve the cebiche with the sweet potato and the kernels of corn.

TIP: The fish used must be freshly caught from that day, never frozen.

A concentrated broth made from shrimp head extract and accompanied by shrimp tails, dried red chili peppers that are then toasted, poached eggs, yellow potatoes, rice, fresh cheese, and milk. A traditional delicacy of Arequipa cuisine. A Lima Sigh

As in every art of love, a sigh will be got by he who knows how to prepare a Lima Sigh, sweet and tempting. A yoke of cooked sweetened and condensed milk is covered with a mixture of meringue, port wine, and a touch of cinnamon. Suspiro a la Limeña (serves 4 people)

Preparations: Make manjarblanco (caramelized milk paste) with the two types of milk constantly stirring them until it reaches the desired consistency. Then, remove from the heat. Next, add the yokes and stir to avoiding curdling. Then, add the vanilla. Make syrup with the sugar and the Port wine. Make a meringue by beating the egg whites until they are stiff. Then, pour a very thin stream of the hot syrup into the egg whites. Beat until it is cool. Serve the manjarblanco with a covering of meringue in a dessert bowl. Sprinkle with cinnamon powder. Pisco Sour

An adventure in every sense of the word. The sweet, the cold and the volatile are mixed in this cocktail made out from pisco and Peruvian lemon. A sensitive palate, a sensible drinker and any excuse are enough to drink a Pisco Sour as it is only made in Perú.

Place all the ingredients, except for the Angostura Bitters, in the order listed above in a cocktail shaker. Shake for 15 seconds. Strain and serve in a chilled, 8 oz. cocktail glass. Decorate the top with 3 drops of Angostura Bitters.