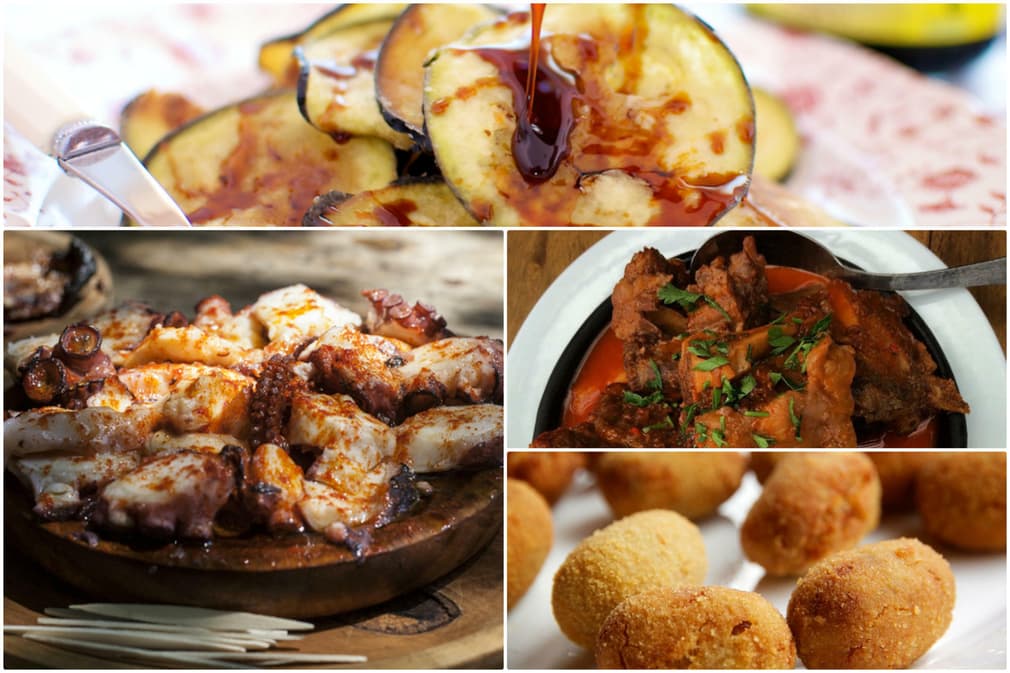 Before we start, I love a good paella. Most people do. But you can't reduce Spanish gastronomy to paella any more than you can reduce it's wines to sangria.

Spain's food is so varied because of the country's sheer variety of ecosystems and history. The succession of cultures that have passed through the Iberian peninsula have each left a lasting mark on the local cuisine we know today.

Whilst Iberian Celts may have already made pot stews more than 3,000 years ago, Phoenicians brought their sauces. Carthaginians the humble chickpea. Romans and Greeks contributed with olive oil and wine. The Moors enriched it with rice, exotic fruits, vegetables, nuts and spices as well as the distilling technology which ironically helped in the production of spirits such as Orujo.

But that's not all! Remember that Spain ruled most of the New World and brought a lot of new flavours to Europe: tomatoes, corn, vanilla, cacao, chilli pepper and potatoes.

Spanish food is an amazing melting pot, both outside its borders but also within, ancient kingdoms that united to become Spain all having their own culinary traditions.

Spanish cuisine has very popular roots, and most of it is down-to-earth, uncomplicated food, based on the ingredients available locally or the crops grown regionally. You will find an intense pride in regional food and traditional styles of cooking.

Here are some of our favourites, we'd love to hear yours:

Fresh shrimp, sautéed in olive oil and lots of garlic, with a touch of Spanish paprika, a splash of brandy and a pinch of red pepper flakes gives the sauce a slight bite. Although this is commonly served as a tapa it is too good not to eat as a main course, Natasha's default when she order in a Spanish restaurant.

If you've never tried octopus, this is a great way to start. Served with boiled potatoes, olive oil and sweet Spanish paprika, this delicious, tender and mouthwatering octopus has become one of the main features in Galicia.

So, not necessarily the most exciting of dishes. In fact, often disappointing, but when you have the real thing, it's a guilty pleasure that is almost impossible to resist. It's all, at least mostly, in the sauce. In Madrid, head to the source - Bar las Bravas. You'll be converted.

Recognised as one of the most important dishes of the Spanish cuisine par excellence, it is made with fabes (highly prized Asturian white beans), several types of sausages and pork, as well as saffron and paprika. Ask Thomas and he'll give you some tips in preparing this lovely dish as he does it very well.

Anything which tastes as good as chorizo cooked in cider can't be good for you, and yet, Spaniards live a long time on average. So eat up!

As one wag once said:

"Any nation that can breakfast on churros and chocolate need demonstrate its bravery in no other way'. Admittedly, dipping fired dough into thick chocolate sauce/drink isn't a daily treat but sometimes, just sometimes, there is nothing better."

Clams, steamed in white wine, garlic and a merest hint of dried chilli. For me, this is one of the greatest treats if the sand is between your toes and the wine is white and cold.

There is so much mediocrity in the world of paella that it's easy to forget just how good it can be. Regardless, it is the ultimate sociable dining experience - everyone sharing a dish of simple, honest food. There is nothing quite like it.

Of the delicious multitude of seafood fritters Spain has to offer, this one might stand out as the most dramatic and memorable during hot summer days. It consists of battered, fried squid, cut into rings, dipped in flour and egg and then fried. Do not hesitate to ask for extra garlic mayonnaise.

A common sight on bar counters and in homes across Spain, this creamy and smooth fried Spanish croquettes with ham and eggs dish can be served as a tapa, light lunch, or a dinner along with a salad. Other variations to ham include shredded salt cod, minced shrimp, chopped chorizo, cheese, or just about any vegetable. But really, the ham one is a favourite.

This dish from Cordoba is certainly not a dish for anyone who is watching their fat intake, but if you don't care, this oxtail stew might become one of your favourite stews. Add fries with it and it will become fantastic for winter days. But beware if you do it by yourself, this is the slowest of slow cooking so going to a restaurant for Rabo de Toro could be a more realistic option.

Whilst La Rioja is most known for its high quality wines, its cuisine it sometimes overlooked, but don't make the mistake with this fabulous-tasting classic made with potatoes, onion, garlic, sliced chorizo and paprika. Originally a dish for peasants, famous chef Paul Bocuse said of it 'one of the greatest dishes created by man'.

Andalucia also has something sweet and savoury for vegetarians, Berenjena con Miel, are crispy thinly sliced aubergine fritters drizzled with local 'miel de caña' (sugar cane molasses). Note that 'miel de caña' isn't to everyone's taste' so you may be safer using your favourite honey when at home.

This splendid cake is not just a normal almond cake, it has something special. Is it the cinnamon? Is it the orange flavour? Who knows? The only thing to say is don't miss it out, above all when visiting Santiago de Compostela, from where it comes.

Last (but not least) this Valencian tiger nut milk deserves a place on our list too. Beware that this one is different than the Horchata made in other countries in Latin America, as it is made of water, sugar and tiger nut (a plant), while in Latin America it is generally a rice-based beverage.

This barely touches on the great food in Spain. Partly because so many of the greatest Spanish delicacies are quite simply a single ingredient:

Jamón Iberico, Chorizo, Salchichon, Fuet, piquillo peppers, artichokes, any number of beans (pulses), endless varieties of seafood, I could eat chipirones all day long. The lamb from Cantabria, beef from Navarra - or Galicia, or Asturias'.the game is outstanding too. Spanish olive oil deserves a book all of its own. Fish from Cadiz's red tuna, to Biscay's hake, salmon and trout from the mountains'. And we haven't even got to the cheese course. Spanish cheese is, in my opinion, the best in the world, bar none.

Our Spain holidays   Get in touch

Experience some of Spain's best food on these trips