How to make a delicious, traditional Paella 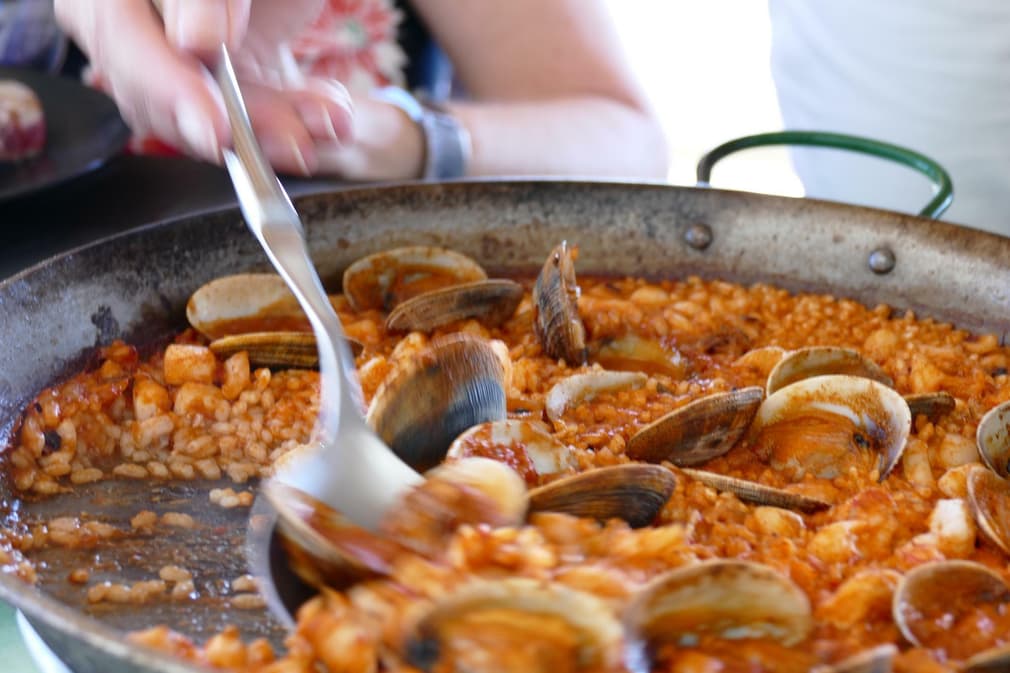 Paella has to be the best known of Spanish dishes. Amazingly though, it really only became famous from the 1970s when Spain's tourism boom started in earnest.

Of course, that boom happened along the Mediterranean coast of Spain, notably in the region around Valencia. It is because of this that what was a regional dish became so intrinsically linked with the country as a whole.

Valencia on the central east coast of Spain is the undisputed home of paella.It is one of the largest natural ports in the Mediterranean and has been of the most important rice-producing areas in Spain since the Moors introduced irrigation about 1,200 years ago.

It is very difficult - if not impossible - to define what paella exactly contains. It is said there are as many paella recipes as there are cooks! For us though, the best recipe comes from our friend Maria Jesus Vallejo Ramos from Xativa.

Scroll down to see her recipe.

Some people trace paella's origins back to the servants who would take the leftovers from Moorish royal banquets and add rice to cook it all over open fires into dishes they would take home to their families. The word 'paella' may well derive from the Arabic word baqiyah, meaning 'leftovers'.

Another theory, romantic and unlikely in its simplicity, suggests that the dish was first prepared by a lover for his fiancée. He made it 'for her', para ella. Get it?

Probably the most commonly accepted version is simply that in the Valencian language, the term paella derives from the Latin word 'patella', referring to the pan that it is cooked in. A bit like a balti in that sense.

One thing we know for sure is that paella grew in popularity around the mid-19th century when labourers cooked their lunchtime meal over an open fire in the fields.It was made with rice, plus whatever was to hand around in the countryside: tomatoes, onions, beans, and snails. Saffron and meats like chicken, rabbit or duck were also added - but only for special occasions. Seafood was very rare in the fields of Valencia so that never appeared!

Like all popular dishes the combination of foods depended on what each person had to hand. Little by little, paella recipes were adapted with new variations appearing, as seafood or chorizo.

Nowadays, among Valencians there is no consensus on the 'true' composition and method of preparation of paella. As is so often the case with Spanish food, there is little consensus, plenty of debate! One of my favourite sayings is: 'Three Spaniards, four opinions'.

Not to be deterred, in 2011 the Valencian authorities registered paella under a 'Denominación de Origen' (Designation of Origin) by defining which recipes can and can't carry the label 'authentic Valencian paella'. It consists of 10 basic, mandatory ingredients:

No restaurant (or recipe) can claim to offer 'Authentic Valencian Paella' if they don't include these 10 ingredients. Although, there are also some small variations allowed, as they can include:

Depending on the region in Spain, most restaurants will offer three types of paella:

Valencian, Seafood or Mixed. But paella in Valencia is much more than just a spectacular looking plate of food, it is part of the local culture, a source of pride which truly reflects their long culinary traditions. In Valencia, every child claims that their parent makes the best paella! And in Murcia, and in...

Our recipe comes from a good friend of mine's mum, Maria Jesus Vallejo Ramos - the most delicious paella in the world.

A note on paella rice

It does make a difference the quality of rice you use: the better the rice, the better the paella. As I understand it, the 'grain' of paella rice grains, uniquely, run perpendicular meaning that they absorb more liquid than other forms of rice whilst retaining their structural integrity. The best rices are said to be Calasparra and Bomba which are produced in the region of Murcia (just south of Valencia). No doubt there are rices that are as good which don't carry the D.O. label and cost less - I'd love to hear thoughts on this - but it's hard to go wrong with the good stuff. Plus, it usually comes in a rather beautiful miniature cotton sack with red stitching on the outside. Whilst discount supermarkets such as Aldi do occasionally stock paella rice (and at a great price) I have found the quality to be markedly inferior. If you like in the UK or Europe you can buy the real stuff (plus all sorts of other paella kit) from The Tapas Lunch Company. In the US try La Tienda.

Please note that this dish is best prepared in a paellera (a proper paella pan) on a cooker/fire/burner which delivers even heat across the entire base of the pan. However, if you are dipping your toes into paella for the first time the instructions here work for a normal, large, saucepan. If it works for you, you will hopefully invest in a paella pan and then invite us all round for supper.

Now, here is where we diverge a little depending on which type of pan you are using. If using a normal domestic pan with a lid, you will need a lot less water than you will if using a proper paella pan (paellera). With any paella the amount of water you need does depend on the rice, the heat, the hardness of the water, etc. so be prepared to go a little off-piste if needs be.

Yes, this is the most delicious paella recipe we know of, but we expect (and welcome) any criticism!!!