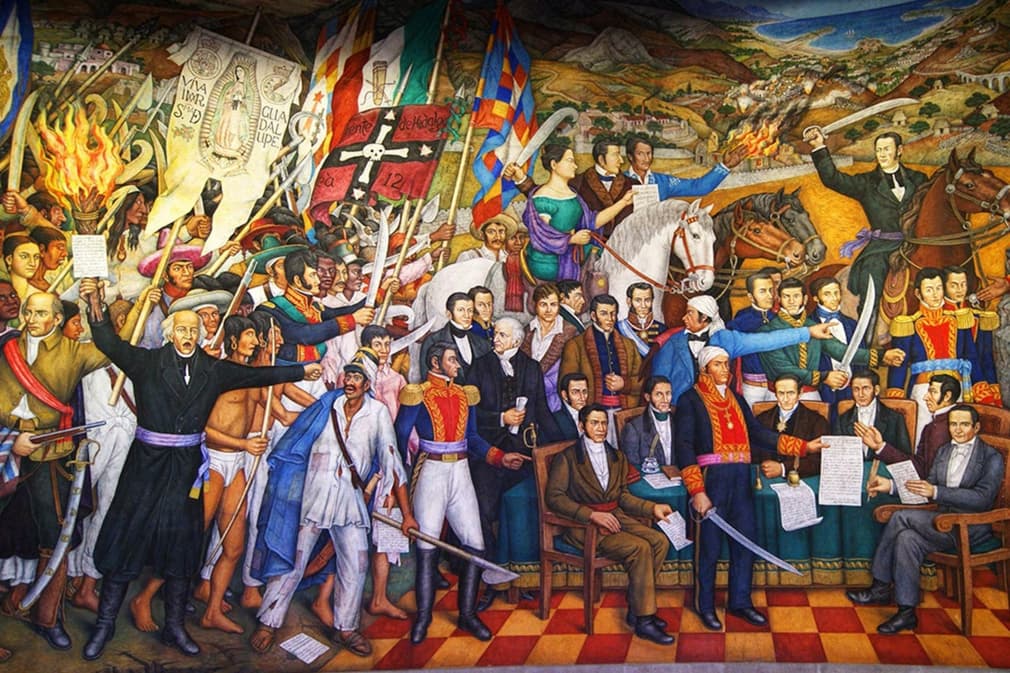 By the 18th century, Spain and Portugal had colonised most of the New World. Harsh regimes were in place, plunder of wealth the name of the game and a Spanish elite safely installed to keep it all ticking over.

However, the independence of the United States from England in 1783, followed by the French Revolution and the Napoleonic conquest of Spain woke the autonomist aspirations of the Criollos - descendants of Spanish settlers born in the Americas.

In a remarkable movement which began in 1810, Spanish viceroyalties gained independence one after the other, in less than two decades. Leading the charge was Simón Bolívar who tried, not without brutality, to unite them all under the North American model...

'Criollos' against the metropolis

Criollos started to rebel and protest for the first time in 1806 when creole officer Francisco de Miranda, tried to land on Venezuela's coast. He was repelled and forced to return to Europe but the seed had been sown.

Two years later Napoleon's overthrow of the Bourbon dynasty in Spain and the installation of his brother as king of Spain made criollos across Latin America question their allegiance to the homeland. What happened next was a remarkable wave of insurrection against which the colonial administration and royal army had no effective resistance.

In April, the Caracas municipality effects a mutiny, removing power from the official representative of Madrid.

In May, Criollo elites launch the 'Revolución de Mayo', hunting down the Viceroy of Spain. Demands are not yet for independence.

In July, a Republican junta takes power in Santa Fé de Bogotá, the capital of the Viceroyalty of New Granada.

In September, the priest of the village of Dolores gathers his flock and invites them to rebel against the representatives of Madrid. He concluded his speech with the famous cry of '¡Viva la Virgen de Guadalupe! ¡Viva Fernando VII! ¡Abajo el mal gobierno!' (Long live the Virgin of Guadeloupe, long live Ferdinand VII, down with bad government!). But his rebellion is short lived and he is arrested and executed by the authorities the following year.

Simón Bolivar leads Venezuela towards independence from Spain, gaining him the distinction of being called 'El Libertador' - the liberator.

By early 1816 Spain had recovered control of fall its except Paraguay. But the separatists haven't been vanquished.

Following the victories of General José de San Martín over Spanish troops, Buenos Aires formally declares itself independent as the 'United Provinces of La Plata', in July. Dreaming of being crowned emperor of the liberated territories, San Martin crosses the Andes to liberate both Chile (1818) and Peru (1821).

Meanwhile, Bolivar leaves exile in Haiti and resumes the struggle in Colombia and Venezuela with the help of the interfering British. Landing at Angostura (now Ciudad Bolivar), he forms a Constituent Congress and seizes the Orinoco region. But, noting that Venezuela was not ripe for insurrection, he decides to try his luck in the neighboring New Granada (modern day Colombia), and liberates Bogotá in August 1819.

Named president and military dictator, Bolivar proclaims the advent of 'Great Colombia' (Venezuela, New Granada and Quito), then, having expelled the Spaniards, he convinces San Martín to yield Peru to him.

At the same time Brazil - the huge Portuguese colony which occupies half South America - emancipates smoothly. John VI, founder and emperor of Brazil, proclaims independence without a single shot being fired.

In the Andean region, Peru is the last to be freed by General Sucre in December 1824. The area of Peru with greatest silver deposits in turn proclaims its independence, taking the name of Bolivia ... in honor of the 'Libertador'. Its administrative capital is named after the heroic lieutenant ... Sucre.

At this point, South America is effectively unified under Bolivar's rule.

Unified until Colombia goes to war against Peru and Venezuela separates to end 'Great Colombia' at which point, the great Pan-American dream dies. Because of a lack of a strong and unifying centre, Central America follows the same path in 1839, when the United Provinces of Central America breaks out to become several countries: Guatemala, El Salvador, Honduras, Nicaragua and Costa Rica.

Independence movements were inevitable in Latin America in the light of events in Europe and North America. But what would Latin America be if Bolivar's dream had been realised' What if the criollos had had the same rights as the Spaniards, like in the British Empire? Would direct Spanish rule have continued for longer?...