Capoeira, the ancestral fight that became a game

Ask ten people to describe Capoeira and you will most likely hear ten different answers: martial art, dance, art form, form of self-defense' So what exactly Capoeira is about?

Because Capoeira involves movement, music, and even philosophical elements, we might describe it as a dance which is a fight and a fight which is a dance. Of course, you don't actually fight, you 'play' capoeira. Let me explain'but first we need to go back in time.

Capoeira was created in Brazil some time in the 16th century. It is difficult to point out its exact origins, because few documents about slavery in Brazil exist today. Two years after Brazil's official abolition of slavery in 1888, most documents related to the slave trade were ordered to be destroyed by the government in an attempt to erase the shame of slavery from the face of Brazilian history. As a result, the true origins of Capoeira may never be known.

Having said that, it is generally agreed that "the seeds of Capoeira were sown by the African slaves taken from the region of Angola". The original movements were based on a courtship dance called 'The Zebra Dance,' in which men would engage in mock fights for the right to marry.

In Brazil, this ritual dance evolved into a form of self-defense whose movements emphasized attacks with the head and feet, including head butts, sweeps, and kicks from a handstand position. Developed in the region known as Pernambuco in 'Quilombo de Palmares,' presently state of Alagoas, the Portuguese slave owners outlawed its practice because they recognized that Capoeira was used as a form of resistance and rebellion 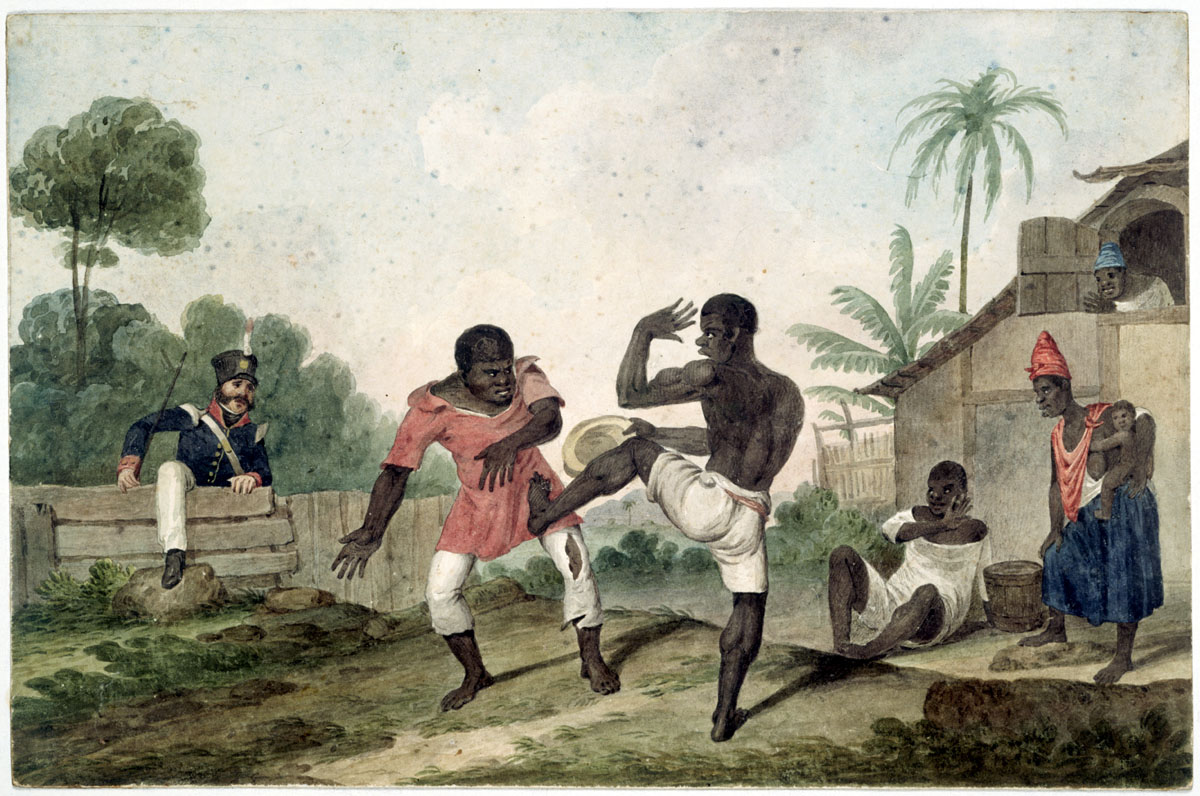 But, instead of being suppressed, Capoeira's movements of attack and defense were blended with dance steps and acrobatics so that the plantation overseer would instead see a strange but harmless dance. The slaves also began using musical instruments as a way to disguise it. Different rhythms were even created to alert capoeiristas of approaching danger and avoid being caught.

You cannot experience the essence of capoeira until you play a 'jogo' (game). This takes place in a circle called 'roda' made up of the players and the audience. Central to the roda and the practice of Capoeira is the music, which is made up of an orchestra consisting in three berimbau (one-string musical bow), pandeiros (tambourines), an agogo (double bell), a reco-reco (grooved segment of bamboo scraped with a stick) and an atabaque (single-headed standing drum). Once the roda begins, the players start by singing a 'ladainha,' a ritual song of commencement, then a 'corrido,' a call and response type of song, which is passed on to the musicians and played for the rest of the game.

The music of Capoeira serves many purposes from commenting on, as well as controlling the action within the roda to teaching rythmn and timing while inspiring the players to exchange movements of attack and defense in a constant flow. It is then only when both the music and movements are combined that one begins to feel the true essence of Capoeira.

If you feel young (at heart) and want to improve your agility, strength, stamina, reflexes, mobility and balance then Capoeira is the best sport out there.

There are many schools of Capoeira throughout the country that offer open classes, workshop, and courses, including the London School of Capoeira, which was the first place to offer capoeira in the UK. You can find our more at londonschoolofcapoeira.com.

Alternatively, we can take you to Brazil and show you how the mestre (capoeira masters) are confidence playing in the roda, or why not teaching you to play the berimbau or other Capoeira instruments.